Burlington Industries LLC, which is a division of Elevate Textiles, said it will be supplying “wool blended fabrics” for use in the U.S. Army’s updated “green service uniform.” The Greensboro, N.C.-based company said the fabrics will be made at its facilities in Raeford and Cordova, in North Carolina.

As previously reported, American Woolen Company said it was producing a portion of the fabrics for the new uniform as well. Burlington is producing fabric for the jacket, tie, and bottoms.

In a separate, but related announcement, the National Council of Textile Organizations commended the Senate for passage of the National Defense Authorization Act of fiscal year 2020, which lowered an “acquisition threshold” thereby making it easier for U.S. manufacturers — including many textile firms — to supply the military. The House’s Armed Services Committee held hearings on the NDAA earlier this month, and the House is expected to vote on it in July.

Regarding the new uniform, Burlington Industries said it was “honored to be an integral part of the defense supply chain for over 55 years” and said the development of the new “Army service uniform fabric” was a process that has been under way “for over two years in partnership with the Defense Logistics Agency, the U.S. Army, and several private industry partners.”

The company said in a statement that the entire process “has focused on one core concept — serving the men and women of the U.S. Armed Forces.” Burlington said the new uniform’s design was inspired by World War II-era uniforms, and are “expected to be adopted Army-wide by 2020.” 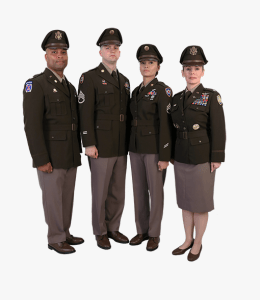 Burlington did not disclose the budget of the contract to supply the fabric, but President Trump had noted previously that the new uniforms were going to be “very expensive.” The U.S. Army had noted in media reports that the uniform was designed to last a lifetime.

Allen Smith, president of Burlington, said the company’s Raeford brand “of worsted wool fabrics are engineered to provide the soldier with advanced durability, comfort and wrinkle-resistance, and provide Burlington’s unmatched color capability to ensure each uniform issued matches over the span of many years.”

“As our nation prepares to celebrate the anniversary of its independence, we are honored to see the new Army green service uniform in action and to pay tribute to the men and women who protect our freedoms each day,” Smith added.

The company also noted that its Raeford operation “is known for superior consistency and color continuity, which is a requirement for a force as large and diverse as the U.S. Army. Skilled workers, many with more than 20 to 50 years of experience, carefully tend to each process, ensuring the yarn and fabric are produced to meet the highest quality standards.”

Meanwhile, the NCTO said the recently passed National Defense Authorization Act “strengthens the Berry Amendment and safeguards our national security, by setting compliance requirements to all Department of Defense acquisitions at or above $150,000.” The Berry Amendment gives preference in the procurement of various goods, including textiles and food, to domestically produced products.

“The Senate bill rolls back the threshold for Berry compliance requirements to 2017 levels and adjusts future increases for inflation, which the U.S. textile industry supports,” the NCTO said in a statement. In the 2018 version, the NDAA bill had set the acquisition threshold to $250,000, and the NCTO said the “higher threshold put more than $50 million worth of Berry contracts annually at risk of being outsourced to China and other foreign countries.”

Kim Glas, president and chief executive officer of the NCTO, praised passage of the NDAA and described the Berry Amendment as “critical to the U.S. textile industry.”

“Berry provides the U.S. military with high-quality textile and apparel products that are produced with 100 percent U.S. materials and labor,” Glas said in a statement. “It also helps keep the industrial base strong and provides the best R&D, materials, and equipment for our warfighters. We also urge the House to follow the Senate’s lead and take similar action to strengthen our national industrial base.”

“Without the Berry Amendment in place, defense-related activities are at risk if supply chains are filled with imports of undocumented origin,” said

Kathie Leonard, president and ceo of Auburn Manufacturing Inc., which is a small textile-maker of fire-resistant fabrics, said without the Berry Amendment, “defense-related activities are at risk if supply chains are filled with imports of undocumented origin. Our ability to continue supplying 100 percent domestically produced products to the military is contingent upon a reasonable Berry threshold. The minimum was raised from $50,000 to $150,000 several years ago. Last year it jumped to $250,000, leaving us with only 15 percent of the defense market we serve.”

Ashley Bullock, government contract sales manager at Raeford Uniforms, a division of Burlington Industries, said the company “relies on the Berry Amendment to maintain our current operations in North and South Carolina and our ability to make continual investment to ensure the U.S. warfighter has the most innovative, highest-quality, and technologically advanced clothing and equipment possible.”