Donna Carpenter, wife of founder Jake Burton Carpenter, has transitioned to chairman of the board.

John Lacy was elevated to ceo of Burton Snowboards.

On Thursday, the Burlington, Vt.-based action sports brand made a change in its executive ranks, naming John Lacy its solo chief executive officer and Donna Carpenter chairman of the board.

Carpenter, wife of the founder, had shared the ceo post with Lacy since the fall of 2018. As chairman of the board, Donna Carpenter takes over the role previously held by her husband.

However in the case of the Carpenter family, all three of Donna and Jake Carpenter’s sons have chosen to work for the business, the most recent one joining last fall before his father got ill. According to Donna Carpenter, Taylor Carpenter is working on North American sales for the company while his brothers George and Timi have taken over their father’s most recent passion project, Mine77, the limited-edition collection of apparel and gear that features innovative fabrics and cutting-edge technology that he launched in December 2018. All three of the younger Carpenters are also on the company’s board.

“We’ve come to the realization that this will remain a family-owned company going forward,” she said.

But running the day-to-day operations of the company will now fall to Lacy.

“John has earned the trust of Jake, myself, our sons and our board of directors to lead Burton as the ceo,” said Donna Carpenter. “This promotion is well-earned and has been a milestone Jake and I have been planning for quite some time. Several years ago, we told John that if he wanted to be the ceo, he needed to surround himself with a strong group of leaders, strengthen the brand and culture, focus on the strategic plan and deliver solid financial performance. John was up to the challenge and our business has gotten consistently stronger since John became president and then co-ceo.”

Lacy, who has been with Burton for nearly 23 years, had served as president for three years before being elevated to co-ceo.

He started his career at Burton in 1997 working the phones in rider service. Since then he has held positions in almost every facet of the company, from customer service, product development and sales to executive roles overseeing the product departments. In 2016, when he was promoted from chief product officer to president, he navigated Burton through a volatile retail landscape by increasing the company’s focus on direct-to-consumer opportunities. Since becoming co-ceo, the company has exceeded its financial goals two years in a row by increasing sales, reducing inventory and enhancing direct-to-consumer initiatives.

Donna Carpenter said that by serving as co-ceo, she was able to “mentor John into the role. When I stepped in as ceo in 2015, I thought he needed a little more time, but he’s really proven himself. He is a rising star who has gotten us through so many tough times and he’s really grown as a leader.” 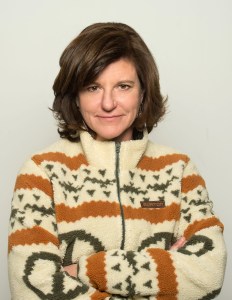 Donna Carpenter has assumed the role of chairman of Burton’s board.  Andrew Morales/WWD

His promotion will also give Carpenter the opportunity to continue her husband’s legacy “protecting and advocating for the sport of snowboarding,” the company said. She will also continue to support international markets and advocate for more diversity in the snow sports industry.

“To have earned the trust of Jake, Donna and the board to become Burton’s ceo is one of the biggest honors of my life,” said Lacy. “Empowering the company to create the next era for Burton will continue to be my main focus. And working closely with Donna and her sons to protect the heritage of this incredible brand and sport we all love will be a privilege. The future is bright for Burton, and you can feel the commitment and energy from everyone who works here to build on what Jake started.”

Although Jake Burton Carpenter had stepped back from the day-to-day operations of the company several years ago, his presence remained pervasive throughout the company. And his relatively sudden death on Nov. 20, 2019, was a major blow to the family-owned business, its employees and the snow sports community. Its founder was only 65 and he succumbed to complications from recurring testicular cancer.

Lacy acknowledged that trying to fill the shoes of someone as legendary as Jake Burton Carpenter is “somewhat challenging, but it’s also exciting when entrepreneurial founders are so driven. They literally have changed the world.

“It’s not always easy navigating a family-owned business, but I’ll be here 23 years in July and I worked closely with Jake and Donna and the family, and I know where their passions lie and what’s most important to them. I consider myself an owner, and I don’t own anything.”

That’s not to say that Burton will remain stagnant. Lacy knows that its core customer, the young consumer, is constantly changing, and his goal is to continue to experiment with new products and technologies as he listens to the cues being given out by that customer base. “They’re very different culturally and it’s my job to figure out how Burton meets them where they are,” he said.

Much of that will involve heightening the digital and direct-to-consumer efforts within the company while continuing to expand Burton’s reach outside the U.S. There are currently around 70 Burton stores around the globe and direct-to-consumer, which includes both the company’s online and brick-and-mortar sales, currently accounts for 25 percent of overall sales. Online is 50 percent of that number, he said.

Internationally, Burton will continue to emphasize its efforts in Europe, Japan and now China, which both Lacy and Donna Carpenter view as a major growth opportunity for the company. “We’re putting a lot of energy into China,” Lacy said, “because of their commitment to winter sports. And the scale of the digital market there is so enormous, you can’t even wrap your head around it.”

Donna Carpenter said that the company has also charged Elysa Walk, who joined Burton from Giant Bicycle in 2015, with overseeing the European region for the brand. “I will work with her as well as in China, which is going to be a source of great growth for us,” she said. A little over 50 percent of Burton’s business is done internationally, Lacy said. “It’s going to snow someplace, so that insulates us from the challenge of being in the winter sports business.”

He said the future looks bright for Burton, adding that the company’s technical outdoors product and equipment are both performing well as snowboarding experiences a resurgence, especially among the under-20 crowd. “All trend lines are pointing upward,” he said.

On the personal front, Donna Carpenter said she is “doing as well as I possibly could,” and has turned to snowboarding as a way to heal from the loss of her husband. “I never realized how freeing snowboarding could be,” she said, adding that this morning ritual provides a “moment of peace” before she begins her day.

Jake Burton Carpenter, known as the King of Snowboarding, is credited with essentially creating a sport whose annual sales are expected to exceed $352 billion globally by 2023. He founded Burton Snowboards in 1977 out of his Vermont barn and today, the company has evolved into a global business that manufactures snowboards, boots, bindings, outerwear and layering pieces as well as year-round apparel, packs/bags and accessories.