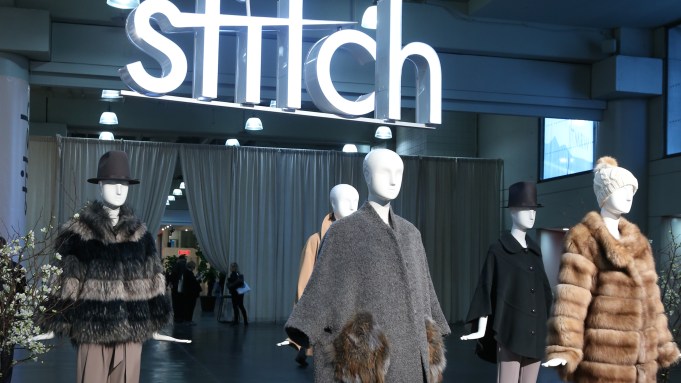 Bright pops of color and new fabrications were what brands were showing to buyers at the four apparel shows owned and produced by BJI Fashion Group at the Jacob K. Javits Convention Center.

The four shows were Edit, targeting the premium luxury market and whose attendees were allowed access by special invitation; Stitch, showcasing accessible luxury brands; Moda, representing lifestyle and contemporary brands, and Fame, for the junior and young contemporary lines.

Many of the brands present at each venue have shown before. What was notably distinct were some of the brands that showed for the first time at Edit.

At Mi Jong Lee, the designer was showing her personal line of ready-to-wear for the first time at Edit. The brand, designed and produced in Manhattan, was showing some pieces made from a viscose woven blend mixed with spandex — “My own fabrication,” the designer said — that included an artistic design digitally printed on top of the fabric. With opening price points — $650 wholesale for dresses and $279 for a sequin top — she was also showing a toast-colored alpaca jacket updated with trim on the collar, which wholesaled for $799. It’s that little bit of detail on the jacket’s collar that Lee said distinguishes the product as a designer line versus a contemporary fashion brand. Lee has been in business for 35 years, but this is her first time showing a line under her name. Her store Emmelle is still in existence, and the Emmelle label also continues as a wholesale line. A secondary line called Emmelle Black Label was the precursor to Mi Jong Lee.

Kevan Hall was showing his name brand at Edit, too. One of the highlights was a dress in a rayon-wool-elastane fabrication that featured multicolored geometric dashes. The dress, wholesaling for $700, was in contrast to the long, sequined dresses that were also representative of the line. “People are looking for great fabric, texture that has a wonderful feel to it. They also want color, something unusual that they don’t see all over the market,” Kevan Hall said. The designer, who noted that his line is wearable all year round, said the collection was inspired by the Seventies, “a nod to Studio 54, as you can see from the sparkly [sequined] dresses.”

FC Farrington was part of an edited selection of French brands brought to Edit by Sophie Guyot, who partnered with the trade show. The group, dubbed “So… Paris,” included a curation of dresses by André Courrèges from vintage collection and retailer Didier Ludot. Ludot, said of his FC Farrington line: “People want to find key pieces they can keep for a long time.” The line’s opening wholesale price point is $200 for dresses and jackets, and slightly higher for coats. He explained that buyers in the vintage business are also looking for the same thing — finding a key piece that can be added to build a collection.

One new and innovative brand at Edit was Storytailors, a Portuguese fashion brand. Founded by Joao Branco and Luis Sanchez, the line is unique because it is based on the premise that apparel pieces can have elements built in that enable the wearer to change the look on a whim. A long full skirt had strategically placed buttons and loops on the underside that worked as makeshift levers to change its look. A somewhat avant-garde concept were some modular pieces made from Burel wool — think boiled wool so dense it is waterproof, yet thinner and lighter with the feeling of felt — that was put together unsewn like a jigsaw puzzle relying on mini screws. Those screws allow one to add pieces to a jacket to make it longer, or unscrew the long sleeves to turn it into a vest. A jacket wholesaled for $393, while the skirt is $450. Another look showcased was a corset that wholesaled for $2,078, with 7 skirt layers — each one was of a different color made of sheer fabric — that individually sold for $250 each.

At handbag and accessories firm Hammitt, chief executive officer Tony Drockton said traffic was good, with buyers still gravitating towards the cross-body styles. The leather and suede bags, many of which had the signature metal stud detailing, wholesaled for between $185 and $315.

Rose Carmine’s Sandrine Ganem was showing bulky, colorful handknit merino and lurex sweaters and cardigans where each knitted row was of a different color. Ganem said her line has a following in Paris, across Europe and Japan, but not many followers in America, which is why she chose to show at Edit. Xardigan sweaters wholesaled for $200, or about $450 at retail, and take two days to make.

At Stitch, buyers at Peruvian brand Veplen were eyeing outerwear options. Owner and designer Pia Velarde Plenge said the fabrication for the jackets and coats was alpaca, a fiber that she said has overtaken traditional choices such as wool and cashmere, or even camel hair. “In the last few years, there’s been a boom for alpaca. Alpaca is much warmer and softer than wool,” she said.

Also new to Stitch was Oleana, a brand in business since 1992 that is better known in its home country of Norway, although it has a following in the Pacific Northwest in Seattle. Signe Aahus, the brand’s owner, said many of the sweaters and cardigans, which wholesaled for $238, are made from a silk and merino wool blend.

At Moda, Ashley Polizzi, the rep for Tasha Polizzi, said traffic was “in spurts.” The line had a Western focus, and many pieces included the latest trend in fringes. The pieces wholesaled for $60 to $80 for shirts, while cotton-knit sweaters were higher at $90.

Buyers were attracted to an eye-catching ribbon dress from Tesoro Moda that featured thin vertical strips of colored fabric alternating with strips of black netting overlaying a black slip. The piece wholesaled for $79, according to sales rep Howard Berkowitz. Berkowitz said traffic on Monday “has been great,” noting that buyers were seeking out stand-alone items to add to pieces that they already purchased for specialty stores and boutiques.

At Fame, Ashley Cho, the sales rep for English Factory, said most buyers were looking for immediate deliveries. “Mix media has been catching everyone’s eye,” she said, noting a novelty top that had contrasting lace with stripes, or another featuring crocheted lace with eyelet panels. Most of pieces wholesaled between $15 to $53.

Harley Kim, the sales rep at Just Black Denim, said shorts and crops featuring frayed edges at the hem were popular items with buyers. Shorts wholesaled for $17, while crops were higher at $22. There was a small selection of denim jackets and full-length bottoms “The trend is about the hems, from the scissor cut to the unfinished hem and the frayed look,” Kim said.