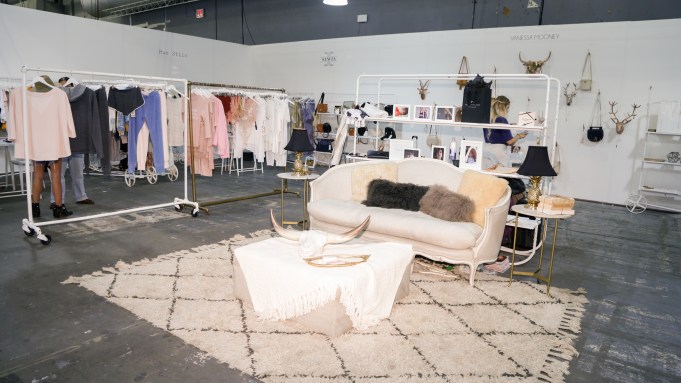 Deirdre Maloney, Capsule and BPMW Agency’s cofounder, said it was “hard to say” whether or not the bombings in Chelsea impacted the show’s traffic, but she doubted it. “It takes a lot to slow down New Yorkers on a mission,” she said, noting that buyers from Bergdorf Goodman, Ssense, Mohawk General Store, Opening Ceremony, Need Supply, Bloomingdale’s, Nordstrom and more attended the three-day event, which ended Monday.

“We are no longer a small show, but it’s important to us to maintain a sense of boutique-inspired intimacy that speaks to our roots. Easy navigation is key,” Maloney said.

The show also included Beauty Lab, a section devoted to natural beauty products, and Elements, a curated section from the fragrance show, resulting in a presentation of 20 perfume and beauty lines under one roof for the first time at the show, according to Maloney.

Another label making its debut at the show was Verdad, founded by Los Angeles-based designer Louis Verdad, whose 15-year career includes designing for private clients such as Madonna, Halle Berry, Cher and Cate Blanchett. Verdad launched his new line in a presentation during New York Fashion Week this season. The collection is denim-focused — standouts included a zip-front pleated skirt in two-toned denim — but also includes tailored jackets and fluid dresses in lace, silk and leather. Price points range from $300 to $600 with some outerwear and leather bombers priced at $900.

Los Angeles-based label LNA had a large booth near Capsule’s entrance, where it was showcasing its spring collection in addition to its core, season-less staples designed by Lauren Alexander and April Leight since 2007. “We’re trying to add more color, and we do a lot of potassium treatments to give our fabrics a distressed wash,” said Ashley Glasson, the brand’s director. “What we’re known for is this faux-cashmere, and we have a lot of other light knits for spring. Since terry is making a comeback, we’re doing a marbled terry cloth style, cut oversize.”

The brand, which has a casual, West Coast sensibility, switched from showing at Coterie to Capsule last year. “Capsule just nails it with cool, independent brands. And great stores come; we see all of our major retailers here,” Glasson said.

Paper Denim & Cloth also had a big presence at Capsule. The denim brand — founded in 1999 as a pioneer in the premium denim scene of the early Aughts — is hoping to make another comeback for spring as a lifestyle brand with a full collection of casual sportswear in addition to its signature denim. “We are sourcing all of our materials in Japan and it’s entirely made in Japan now,” said Linsy Wade, a rep for the brand. “It’s gotten a great response.” The skinny and slim boyfriend styles were the show’s top performers, and the relaunched denim will be priced similarly to contemporary denim labels such as Rag & Bone, averaging about $250 or less.

At Axis, the show’s reformatted sports lifestyle section with an emphasis on swim and activewear, the Belgian label 42|54 was a highlight. Founded in March by Olympic sprinters and gold medalists Élodie Ouedraogo and Olivia Borlée, the label’s numerical moniker stands for the times in which the duo won their medals in the 2008 Olympics in Beijing.

“We did very well with the brand in Belgium, so we decided to take a leap to the U.S.,” Ouedraogo said of her and Borlée’s participation at Capsule. “With 42|54, we wanted to create something you could work out in that was cool enough to wear out afterward. There’s a lot of color going on in active, but sometimes you want something clean and simple. You don’t always want to be in line at the grocery store wearing hot pink. We try to use some color, but it will never be a superloud collection.”

The collection retails from about $80 up to $400, with fabrics sourced and manufactured in Belgium as well as in an all-women’s factory in Tunisia. The latest collection featured a pair of color-blocked knit bodysuits as part of a collaboration with Belgium-based fashion house Pelican Avenue.

Los Angeles-based designer Pari Desai was among the labels included in Perspective, a section of emerging brands chosen by Greg Armas of Assembly New York. Desai got her start working for Calvin Klein, Tse and most recently as the head designer at A.L.C. before launching her label in 2014, which is sold at Bird and No. 6, among other boutiques.

“I like having a laid-back approach, but using really luxurious yarns,” Desai said of her collection, which included bell-sleeved and striped ribbed power knits, silk camisoles and a white denim jacket embroidered with red roses. The label is manufactured globally: denim in L.A., knits in Hong Kong with Italian yarns and chunky Pima cotton sweaters by artisans in Peru. “I like to keep the production as close as possible to the source,” she said. Her spring collection also included a pair of circular totes woven in the Philippines.

Elsewhere, Amanda Mehl was showing her second collection for her label Amehl, which is inspired by Internet subcultures, Tumblr, normcore and Nineties rave culture. A few looks featured allover prints of watermarks, the kind found on Internet stock photos. “It’s very nostalgic,” Mehl said. “And I’m also a visual artist, so I use a lot of unexpected materials.”

Case in point: A few dresses featured colorful PVC and plastic buckles commonly used in children’s car seats. Amehl is sold in two stores, “but I’m hoping to change that by the end of Capsule,” Mehl said.

Stutterheim, the Swedish-based outerwear label founded by Alexander Stutterheim in Stockholm in 2010, is coming off a busy year; in the spring, the brand opened its first U.S. store at 232 Mulberry Street in New York. At Capsule, Stutterheim introduced its lightweight coated cotton and rubberized cotton styles in a pale palette. In addition to its signature raincoats, the spring offering introduced short jackets with cargo pockets and feminine, A-line silhouettes with color-blocked stripes.

“Traffic has been up and down, but we’ve seen a lot of new accounts, more than I expected,” said Peter Wijk, the brand’s president in North America. “We have a bigger women’s line than ever before.”

Some of the brand’s current stockists include Barneys New York, Kirna Zabête and La Garçonne in New York. Core outerwear styles start at $295 and newer, coated cotton jackets — which are water-resistant — go for upward of $400.