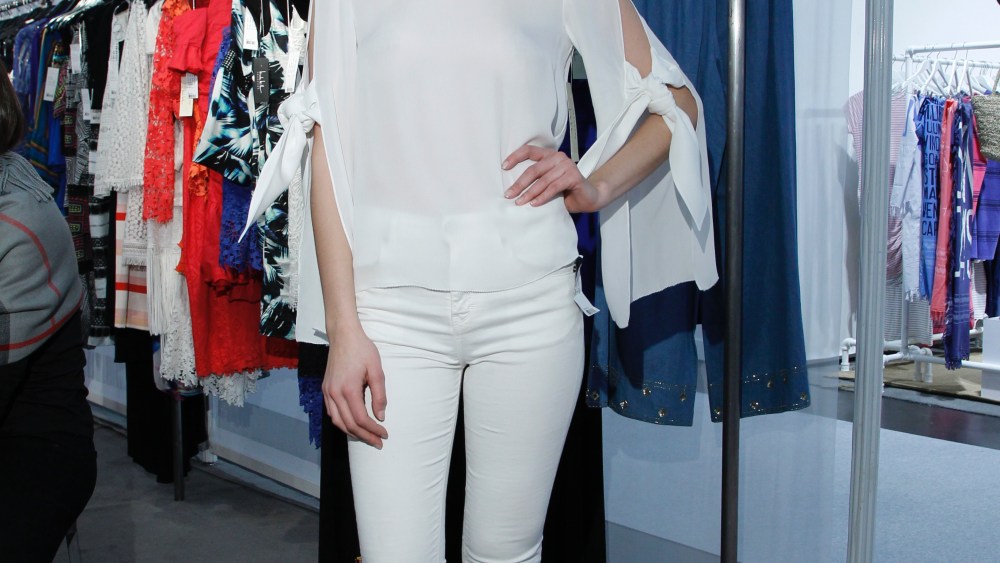 Tom Nastos, president of UBM, women’s and children’s exhibitions, said he was pleased with the pace of business. He noted that it was the first time that UBM had all the shows under one roof, featuring over 900 exhibitors.  (Accessories Circuit, Accessories The Show, Children’s Club, Fame, Intermezzo and Moda).

“It was easier for attendees to shop. The general feeling was that it was a strong writing show which bodes well for the rest of the year and the balance of the first quarter,” said Nastos. He said each of the shows were able to keep their individual definition, and that buyers stayed throughout the three days.

Retailers surveyed were looking to stock their shelves for spring at Intermezzo, which had about 300 exhibitors.

“We’re looking for immediates that are special, such as cold-shoulder tops, bell sleeves and off-the-shoulder tops, things that feel good and are tactile,” said Sharon Sinkevich, owner of The Apple Tree in Stroudsberg, Pa., a 2,200-square-foot contemporary and misses’ store. She said she was shopping the show looking for sportswear that was soft, packs well and is priced well.

Rachel Perry, owner of Baubelles in Hamilton, Bermuda, a 400-square-foot store that’s 20 feet from the beach, said she was shopping the show looking for clothing, accessories and jewelry. From Willow & Clay, she was buying pajama pants and cute tops. “My store is very boho-chic,” said Perry, who was also shopping Intermezzo for bohemian dresses and found some with nice details on the back. With the America’s Cup taking place in Bermuda in May and June, “we’re looking to make sure we get it right for that,” she said.

Deborah Schade, owner of Special Effects, a salon and spa with a boutique in Greenport, L.I., said she was searching for flowing, easy-to-wear beachy lines at Intermezzo. “I think it’s a great show,” she added.

Julie Biondi, owner and Sarah Fraunfelder, buyer for The Lovely, a store on Nantucket, were also seeking women’s clothing and accessories with a beachy bohemian vibe. “We’re different from a department store, we’re your best friend’s closet,” said Fraunfelder. She said they were looking for things that customers could say they bought on Nantucket and wear out that night. Among the lines they liked were Saylor, which is a whimsical yachtwear line, and Onjenu, which had “beautiful prints.” They also bought jeans from Level 99.

They said that the cold-shoulder tops and slit shirts still do well, but once the look hits Zara, the customer doesn’t want it anymore. Their store caters to women from 18 to 80, and attracts daughters, mothers and grandmothers. The store is open April through Columbus Day, and then opens again for the holiday.

Exhibitors were pleased with the smaller size of the show and the pace of business.

Marina Kievsky, owner/designer of Aum-Couture, an exhibitor, said Monday that business had been very good, although was a bit slow on Sunday. The seven-year-old brand was selling a lot of silk tops. “Our niche is color,” said Kievsky. The collection is manufactured in the U.S. and wholesales from $78 to $86. She said she was writing a lot of business with specialty stores from Long Island and New Jersey. The company’s off-the-shoulder style has been their bestselling top.

Terez, the leggings resource, was having a strong show. “We’re doing well with our illusion prints and heathered leggings,” said Lauren Morris, director of sales. She said the brand was also selling its French terry pieces, and the tops business has really expanded. The company has introduced a beach pant for March delivery and a nautical capsule for late spring/early summer. It continues to do well with its photo-real prints on hits leggings. “We’re taking what we see on the runway and transitioning it into activewear,” she said.

Veronica Ferrer, owner/designer of Veronica M, said she was having a very good show, and selling knit rompers and printed tops, as well as easy throw-on dresses and cold-shoulder tops. “We’re selling sexy tops they can wear to the office and cocktails after work. I make them fun,” she said.

Avenue Montaigne, which specializes in pants, was selling mostly spring merchandise at the show, although they had their fall line in tow. Among the hot sellers were denim fringe pants in white and ecru, as well as stretch linen pants. “They like the novelty stretch pique,” said Meg Himmelfarb, sales manager.

Angela George, designer and founder of Alice & Trixie, said the company was selling a lot of lace. “Cold shoulder and off-shoulder is still a huge trend,” said George. She said she was seeing mostly better specialty stores at Intermezzo. “For us, it’s been good. Personally, I like a smaller show. It feels more intimate. The buyers aren’t running around like they’re being chased. They’re sitting longer and taking their time. I love a more intimate environment. “All the cotton gauzes, laces and embroideries have been strong,” said George, whose line wholesales from $72 up to $198 for a silk maxi dress or jumpsuit. The heart of the line wholesales between $90 and $120.