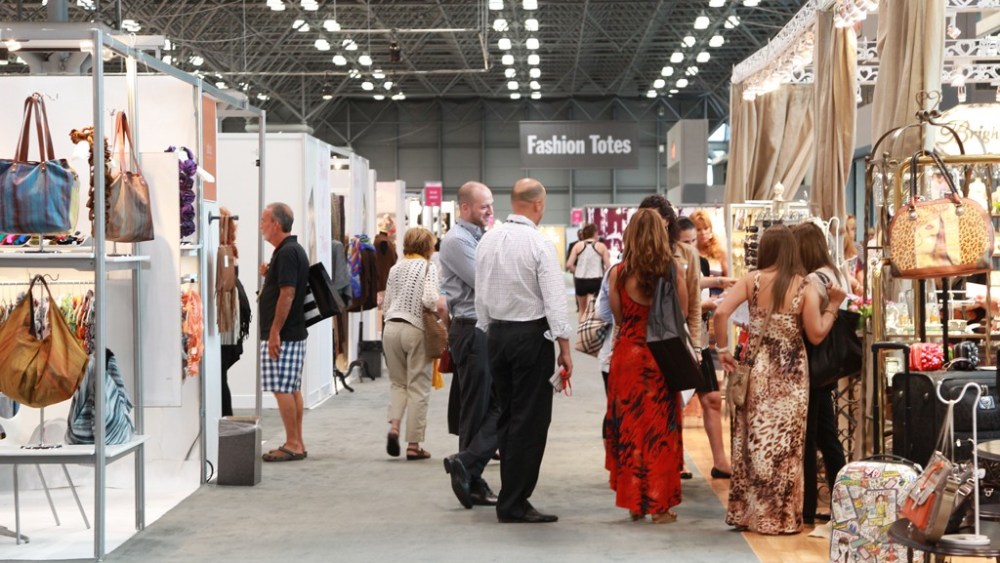 NEW YORK — Business was more upbeat at a string of trade shows here in the last few weeks, while trends ranged from blue and raspberry in apparel and jewelry to beige in innerwear. Here, a look at the shows:

Blue, teal and shades of raspberry and oxtail are the big color trends for fall in everything from tailored looks to vintage jewelry.

Also getting the interest of buyers is fur, especially rabbit fur with raccoon trim, according to exhibitors at the Moda Manhattan/FAME Shows which ran at the Jacob K. Javits Convention Center in Manhattan from Aug. 5 to 7.

According to Edita Bandaryan, a sales representative at Love Token, rabbit fur vests and woolen tunics with fur trim were popular among buyers. She said sales at the show this year were “really good.”

A knit rabbit fur vest with raccoon trim averages $159 wholesale and sells for three times that at retail. While many preferred the natural look — think undyed tan-brown fur versus dyed white or black pieces — others were quick to snap up intense jewel-colored, dyed-fur options for an eye-catching fashion pop to one’s wardrobe.

Bandaryan said one hit among buyers was a teal-colored, rabbit-fur vest with a hood. Another novelty option buyers favored were reversible vests — rabbit fur on one side combined with fabric on the other. While many styles were of the cropped variety in length from vests to short jackets, consumers who tend to be older generally preferred longer-length fur styles, she said.

Layne Dornblum, a regional sales manager for Brighton Accessories, said many buyers were looking for window pieces that she called “holiday showstoppers” — the item that gets both consumers’ attention and attracts them into the store. The company displayed a variety of accessories from small leather goods to charms and beaded jewelry, but it was the handbag category that got buyers’ attention.

“People were excited about the color blue, especially the [blue we call] Harbor Blue,” she said. One display was devoted to handbags and small leather goods focused on the Harbor Blue color option.

As for jewelry, she noted that the charm-and-bead business was doing well at the show, especially the “design-your-own” variety.

“Traffic has been terrific,” she said.

At The Mary Harper Group, which was showing the Spring Street jewelry label, Nina Mancini, sales and marketing coordinator, said “vintage glam” was the hot trend for fall and holiday.

She explained that “glitz is in, but in a classy way. Everyone wants something shiny, but they don’t want it to look fake.”

Simple chains and bracelet options averaged $6 to $14 wholesale, while a necklace in a torsade style with real semiprecious stones could reach as high as $30, and would sell at retail for 2.5 to 3.2 times wholesale prices.

While silver was shown, the big metal trend for fall is gold, she said. Mancini said that big, bold fashion pieces were what many buyers were gravitating towards, many with a hint of an Art Deco-vintage look.

Jennifer Gatz, the New York sales representative for JPK Paris, pointed to bright colors as the star of the show. Buyers, she said, particularly like the brightly colored embossed clutches, shown in raspberry, light blue and a gold metallic as some of the featured color options in the style. Also catching the interest of buyers was their new line of quilted bags, ready for shipment in January.

Nicole Heitmann, national sales manager for the San Diego Hat Co., said the show was “going well,” as buyers are beginning to buy closer to season. Among the top sellers were wool felt hats in tailored styles, many with pops of shades of raspberry and oxblood as color-blocking options. While many buyers were still interested in fake fur styles, she said the more favored trend this year was the turban headband, another nod to the tailored yet vintage look that was the talked-of trend by exhibitors.

Traffic at the show this year was consistent, even on the third day, with many sales representatives at midday still busy taking orders when oftentimes they typically start packing up instead.

According to Britton Jones, president and chief executive officer of BJI Fashion Group, which put together the show, “The August 2012 market clearly demonstrated that there is a lot of opportunity in today’s economy, but you have to work harder than ever before to capitalize on it. Exhibitors who embraced the changing marketplace and did a significant amount of preshow marketing far out-performed those who waited for traffic to come to them.”

Jones said that overall attendance was just shy of last year’s total, but it still attracted buyers from 44 states and 58 countries. Attendance from Japan and Israel was “particularly robust,” he said.

This year, the size of the show floors grew by 7 percent year-over-year and featured more than 2,400 lines of accessories and  modern contemporary and junior-young contemporary ready-to-wear lines, Jones said.

Ethnic inspirations from Nepal to India and Thailand were the main draw at the Nouveau Collective trade fair, a small missy-contemporary venue staged Aug. 5 to 7.

The show, which was formerly held at the Art Gallery Space, 475 10th Avenue at 36th Street, was ensconced at a temporary location at 508 West 37th Street, near the Jacob K. Javits Convention Center.

Show organizer Joanne Feinstein said the show will move across the street to a larger, “open space with 40-foot ceilings and 30-foot windows” for future sessions, beginning with the Sept. 19 to 21 show. The show producer stages fairs five times a year in New York, including January, February and May, as well as yearly shows in Boston in October and Atlantic City in May.

“Buyers love this location because they walk back and forth from the Javits Center. The new forum in September will feel like a large boutique with more mannequins and kiosklike booths, and there will be an outdoor patio for fashion shows,” said Feinstein. “We want to get back to special events like showing portraits of designers sewing a garment.…Retailers love that kind of thing.”

While traffic was slow Monday afternoon, Feinstein and several exhibitors noted that attendance traditionally picks up from 6 p.m. to 8 p.m. for a wine and cheese party staged for retailers who have been shopping other shows at the Javits Center during the day.

“No one is projecting these days and buyers are conservative and are working with receivables — they buy when they sell merchandise,” she said.

Among key items selling at the show were boiled wool scarves in wine, green and black from Nepal at Windhorse, wholesaling for $22; hand-colored acai berry jewelry from a tribe in the Peruvian rainforest at Blue Sky, wholesaling from $3 to $10, and tie-dye dresses and tops from Thailand at Culture Shop, for $16 to $23.

Jewelry designer Deborah Gaspar said she had two best-booking items: a link chain in gunmetal or rose gold that can be worn as a long necklace, a choker or wrapped bracelet and a mother-of-pearl and laminated eel-skin necklace that can also be worn as a belt. The items wholesale from $90 to $220.
“I’m happy with this show and look forward to the new location in September,” said Gaspar.

Organizers described the pace of the CurveNY trade fair as “dynamic and upbeat,” but traffic was sporadic at the three-day intimates and swimwear show at the Javits Center. A number of exhibitors generally said they were pleased with the fair because of repeat business with established retail accounts. In some cases, vendors were hopeful over new accounts which are expected to be finalized by late September.

Gregory Gimble, vice president of Va Bien International, said the pace of business was steady but believed the show could have pulled in more attendance.

“The show was too spread out. We had excellent appointments but fair traffic,” said Gimble.

Regarding new products, Gimble said reaction was strong to a updated and lightweight group of lace-embellished shapewear pieces called Marquise, which feature control thongs and a low-plunge bodysuit.

Maria Scotto, designer of her sleepwear label, noted, “Our usual accounts came in, but there weren’t many new people [retailers].

“But one thing I noticed was retailers were bringing a little more money to the table. I had the impression that retailers were more positive about business and not saying ‘Oh, my God I can’t buy anything this season,’” said Scotto.

She added that solid beige and anything with beige accents were top-booking ideas, along with a ready-to-wear-looking gray and white polka dot print.

“Retailers have really liked the polka dot print and color combination because it has more of a loungewear look,” said Scotto.

“We opened eight new accounts and also had a lot of walk-ins,” said Russell Klein, president of Easton International, the U.S. sales representative for Falke legwear.

“We like this show because it gives us the opportunity to get customer feedback that we haven’t been able to get elsewhere,” said Klein.

He said reaction was strong to Falke’s Pure Shine 15 line of sheer hosiery, which is available in a color palette aimed at the ethnic market.

Up-and-coming lingerie designer Ari Dein said she was “very happy” with the show.

“I did not feel that traffic was heavy but the quality of the buyers who did attend was great.…I’ll do this show again,” said Dein.