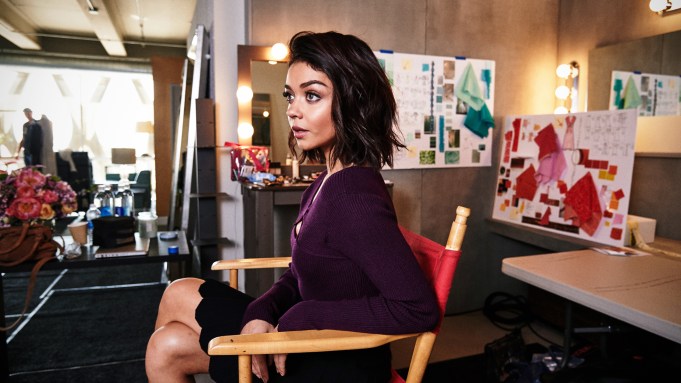 LOS ANGELES — The Candie’s girl is growing up. The company, which was founded in 1981 with the now famous high-heeled wood bottom slide, has since become a juniors staple known for choosing of-the-moment young actors and singers — from Destiny’s Child to Britney Spears to Lea Michele — for its ads over the years.

Now Candie’s has tapped “Modern Family” starlet Sarah Hyland not only as the face of its fall 2016 and spring 2017 campaigns but also as its first-ever creative director. It’s a move that will bolster the company’s efforts to re-brand itself from a juniors basics resource to a brand for young women entering the workforce and looking for pieces to round out their wardrobes, from office to evening to weekend.

Hyland, 25, came on board just in time to help style the look of the fall ads — WWD recently sat down with the actress on the set of her first shoot — and she’s already begun lending her creative direction to the still-in-progress spring 2017 collection.

“We’ve normally just had a face for the brand, but we’ve evolved Sarah’s role into a more integrated one because she’s a fashion authority in her own right and we’re excited that she can lend that to Candie’s,” said Katie Reeves, vice president of brand management for the women’s division at Iconix Brands Group, which holds the Candie’s license. The brand is sold exclusively at Kohl’s stores nationwide and kohls.com and comprises juniors apparel, intimates, accessories, eyewear and footwear ranging from $30 to $60 retail.

Hyland, who had just completed a photo setup depicting her in creative director mode — cue the glossy white desk, artfully arranged bookshelves and colorful mood boards — changed out of a burgundy keyhole top and black A-line skirt and booties and into her own skinny jeans and worn-in T-shirt to chat about her newest role.

“The creative director part is what drew me to this the most because Candie’s has never done it and I’ve never done it, so we’re both new to this type of game,” she said as she tucked her sock-clad feet underneath her in a director’s chair. “The fall line was already done, but it’s really cool to be able to have say in the styling and concept for the shoot we’re doing today. Everything is gearing toward more of a sophisticated career woman. It’s really fun, but more mature.”

Hyland’s ads will debut an update of the logo from the brand’s signature hot pink to a more dusty shade accented with rose gold foil elements. Meanwhile, she’s done her homework with the product. Of her favorite pieces, she said, “They have a great anorak jacket with embellishments [rhinestones, lace insets and zipper details are key for the season] so it’s not as tomboy and it still brings that girly element to it, and it’s paired with this breezy sleeveless button down. I normally would never have pictured it in the Candie’s line, but it’s really good for work and for college.”

She continued, “There’s a lot of fun skirt and top mixes where you have the lace-up top and a laser-cut skirt, or a printed blue top and a fun zip toggle skirt. A lot of pieces you can mix and match.”

While Candie’s age demographic is ages 13 to 34, Hyland will help focus on the 18-to-24, recent high school or college graduate segment entering the workforce. In addition to the brand’s core tops and regular- and curvy-fit pants, which Hyland will help update with trendy colors and prints, she will influence “outfit completer” pieces such as a lace bomber jacket. Fall 2016 will also mark the debut of a Candie’s denim collection, which will include embellished rhinestone details and specialty fabrications, such as floral jacquard.

Hyland, who the press normally encounters on awards show red carpets (“Modern Family” has been a perpetual Emmy Awards nominee and sometime winner for its past six seasons) wearing gowns by designers such as Zac Posen and Monique Lhuillier, said her jeans and T-shirts “are more me.” Which is partly why she likes Candie’s. “It’s a very everyday clothing line, just heightened a bit so you’re not just walking out in jeans and a T-shirt, you’re walking out in an ensemble,” she noted. “And it’s all priced to where you can actually can get everything and have fun mixing and matching.”

Being a celebrity can make getting dressed harder, she admitted. “The only reason it’s harder is you have so many opinions and views of fashion. I’ve always been a…I don’t want to say ‘fashionista’ because I don’t even like the word, it feels conceited. But I’ve always had very classic takes on fashion. But it all depends on my mood. Everyone goes through this: it depends on how skinny you feel that day, how tired you are, if you want to look good for someone, if you want to look good for yourself. That’s why I love fashion, because you can express your emotions through your outfit.”

For Hyland, seeing the Britney Spears Candie’s ads as a teenager was “everything.” “The Candie’s girls one after another have been amazing women not only in what they do but in their lives. Some of my friends have been Candie’s girls, Vanessa [Hudgens] and the Fifth Harmony girls. It’s exciting to be part of a long line of young women who are able to express their fashion through Candie’s.”

Working on the spring 2017 collection was the first time she felt like she’s had a 9-to-5 job, which was a welcome change from playing Haley Dunphy, a character she now knows inside out. “I love to try new things and put myself in a situation that’s uncomfortable,” she said. “Learning something new is scary and fun and challenging.”

As for spring 2017, Hyland said, “Expect color, expect prints, little fun details that will heighten a simple outfit because a lot of the time less is more. Nothing crazy busy and it has to be the right print.”

Because she’s on a “Modern Family” hiatus having just wrapped season seven, she’s headed to North Carolina for six weeks to play Lisa, Baby’s sister in the “Dirty Dancing” remake. “I’m not sure if they will send me stuff or we’ll have phone calls, but I will definitely have to bring my computer to do work outside of the movie,” she said of her new Candie’s gig.

Said Reeves, “The consumer now is looking for a fashion authority — whether actor, musician or influencer — to help guide them through the season. Sarah’s extremely approachable and also a [well-known] actor and she resonates with our customer and will also bring new ones.”