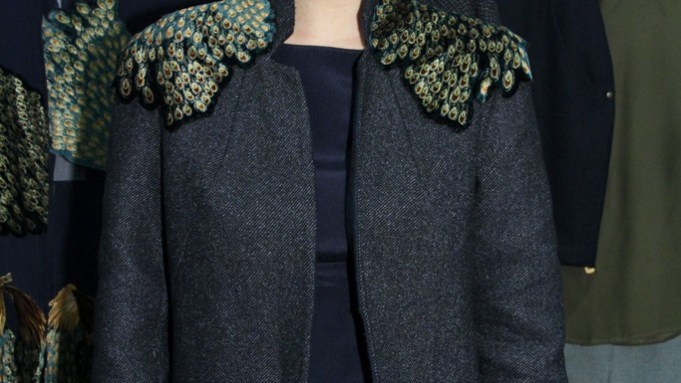 An increase in exhibitors as well as a record turnout of specialty retailers set a buoyant mood at the Capsule New York trade fair for women’s fashion apparel and accessories.

“It’s been a very strong show. We had 300 exhibitor booths compared to 260 last year. I think there’s been a stronger turnout of retailers because holiday sales were good for everybody, even in January, and there’s definitely a sense of optimism in the air,” said Quirk.

The show is known as a platform for emerging new brands that specialize in fashion-forward apparel and accessories, as well as merchandise that’s hip and trendy. Order taking was brisk in the oversize basketball arena, where a casual, laid-back ambience made visitors and vendors feel as if it were a holiday, not a workday.

Among the up-and-coming designers busily showing their ready-to-wear collections to specialty-store buyers was Christine Alcalay, who has been exhibiting at Capsule New York for three seasons. Alcalay attended Parson’s School of Design and interned at Christian Lacroix. She later continued her studies and won the Parsons Golden Thimble award from mentor Michael Vollbracht. In 2002, Alcalay opened her boutique, Kiwi, in Brooklyn, New York, which features her made-to-measure clothing.

“I’ve met a lot of new retailers at this show, and I do a lot of international business with stores in Japan, Saudi Arabia and Dubai,” said Alcalay, who created her namesake collection in 2011. “The serious buyers come late in the day, and I’ve done a good amount of business with repeat customers.”

Rita Liefhebber, a rtw and accessories designer from Toronto, who started her eponymous collection in 2010, was a first-time exhibitor at Capsule. She said she opened new accounts with two specialty stores in Texas the first day and was anticipating several more by Sunday.

“A few friends have shown here before, and this new venue is working out,” said Liefhebber, who was wearing one of her stretch silk velvet tunics. Asked what was booking well, she singled out her signature boiled wool and acid-dyed scarves that can be layered with a number of her rtw pieces.

“Everything is very loose, effortless and comfortable but natural and a little bit weathered looking,” she said describing her top-booking looks, which include hand tie-dyed tops. Wholesale prices range from $90 for hand-edged scarves to $150 for stretch silk tunics.

Designer Alice Ritter, who showed her Piplette by Alice Ritter diffusion line, said she was “extremely pleased” with the turnout of retailers.

“I had a great first show with Capsule last season, and I’ve seen a lot of my top buyers at this session, including Urban Outfitters,” said Ritter. She added that she plans to show at the DNA Paris trade fair.

“I really like the DNA Paris show because it’s a small, intimate venue and we do a lot of business,” said Ritter. Wholesale prices average $30 to $40 for tops, $50 for dresses and $66 to $88 for coats and jackets.
At the Cashmere in Love booth, designer Tolga Dikencik said she opened four new accounts on opening day.

“We have a lot of business with retailers from Japan, Korea and Thailand…Capsule New York is important for us because a lot of new premium brands have joined, and we now plan to show at Capsule Paris,” said Dikencik. She was wearing one of the best-booking items at the show — a purple cashmere sweater with sheared black rabbit trim, which wholesales for $548.