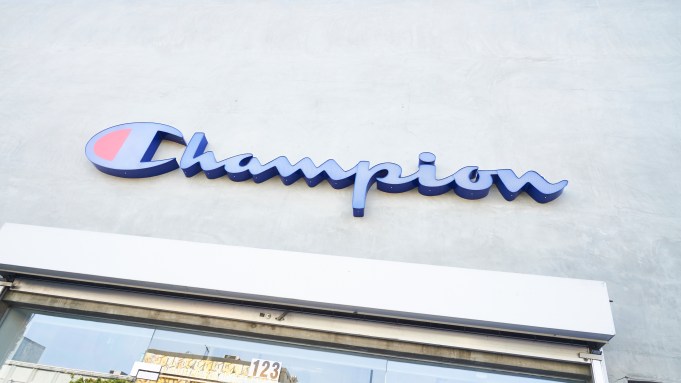 It all started quietly in Rochester, N.Y., in 1919 when the Feinbloom brothers created the Knickerbocker Knitting Co. Soon after, the company signed a deal with the Michigan Wolverines to produce uniforms for its teams, and it was on its way.

The company was renamed Champion Knitting Mills in the 1930s and over the years has been credited with several athletic-wear inventions including the reverse weave sweatshirt, the cotton football jersey, the hooded sweatshirt, the reversible tee and the breathable mesh short.

Sales are currently at around $1.3 billion outside the mass channel, and the goal is to exceed $2 billion by 2022, a 15 percent compounded annual growth rate.

Helping fuel that growth is Champion’s newfound popularity among Millennials, thanks to its recent high-profile collaborations with brands such as Supreme, Beams, Kith, Vetements, Wood Wood, Timberland, Todd Snyder and others.

Today, the company will kick off what will be a yearlong celebration of its centennial. The campaign will be centered around “100 Years for the Team,” which will explore what it means to be a team in 2019.

“This significant milestone for Champion allows us to reflect on what ‘team’ and the evolution of ‘sports’ means today to consumers around the globe,” said Jon Ram, group president of global activewear for Hanesbrands Inc., the Winston-Salem, N.C.-based company that bought Champion in 1989.

“Helping people come together as teams and being innovators in the industry has been an important part of our brand’s story since the very beginning. Now is the time to look ahead and celebrate how teams today have the power to change the world for the better, and how we assist in enabling them,” he added.

The campaign will launch with a film that features Magic Johnson, who shares his reflections on teamwork. “As part of the ‘Dream Team’, I experienced firsthand the power of people coming together to achieve great things,” said Johnson. Champion dressed the Olympic gold medal-winning 1992 U.S. men’s basketball squad, which was referred to as “the Dream Team.”

Throughout the year, Champion will highlight different teams through social media, a special web site, exclusive product collections, events and influencer partnerships. Select teams will also be featured in a centennial celebration video.

David Robertson, the firm’s director of brand marketing, said the campaign is intended to embrace teams of all kinds, “Whether you’re a sports team of four from Tokyo or a team of 300 from Texas interacting in everyday life, Champion wants to find you and to share your story.”

He said the Urban Dove charter school in Brooklyn, for example, will be among the teams featured on the site. The school helps at-risk students by using sports, health and fitness to develop a feeling of teamwork. Also, the VC London all-women’s motorcycle club will be included in the campaign.

Robertson said this marks Champion’s first global campaign and will include a global microsite to encourage consumers to participate by sharing their stories about what it means to be a team.

The celebration will also include the creation of special-edition product that Ram said will be dropping three times throughout the year. It will include hoodies, crews, T-shirts, footwear, bags and other items that “embrace our classic heritage,” he said.

Different events will be held throughout the year in key markets. Champion’s retail stores will also play a role in hosting activations centered around the anniversary.

The brand breaks down to 55 percent men’s wear and 45 percent women’s wear, although much of the product is unisex.

Historically, Champion’s reverse weave sweatshirt — which recently celebrated its 80th anniversary — has been a top seller for the brand. The product was relaunched in 2016 to return to its original details but with a contemporary fit, and sales over the past three years have risen 66 percent, John T. Marsh, group president of global activewear for Hanesbrands, said at the company’s investors’ day last May.

In addition to the reverse weave, T-shirts are very strong and accessories are gaining in importance, Ram said.

The collaborations haven’t hurt either.

Robertson said it’s hard to identify which of the partnerships has been the most successful, but the company uses them to bring Champion to a larger audience.

Snyder said he started working with the brand nearly nine years ago and, “I consider it a huge honor. It’s a large part of my business and it helped put me on the map.

“I’ve been collecting vintage Champion garments for over 20 years. I have over 1,000 pieces that I’ve purchased from various dealers in Japan, London and Los Angeles. Some date back to the Fifties, rare pieces sell for over $1,000. I use them for inspiration reference,” the designer said.

Ditto for Champion’s popularity with younger consumers. She said at the investors’ conference that in 2017, Google searches for Champion sweatshirts “skyrocketed, largely driven by younger consumers on mobile devices, which is up 124 percent, of which 77 percent of these are new consumers to the brand. In fact, more than half the traffic on Champion.com is 24 years or younger.”

But Champion is not only popular in the U.S., internationally, the brand also has a strong presence, particularly in Asia, where Ram said the business is “incredibly strong.” Europe is also a stronghold for the label.

The company’s longtime partnership with Target for the C9 brand is scheduled to end next January, and the brand is also sold at Sears, which filed bankruptcy in 2018. However, the company believes that business can be replaced by focusing on other retail partners in the U.S. as well as its international business.

Globally, Evans said sales jumped 40 percent in the third quarter and “operating margins continued to expand.” He said sales growth in the quarter “was broad-based, up double digits in all regions” and growth in the wholesale, owned-retail and online channels.

And that’s on top of a 33 percent sales gain in the third quarter of last year, he said.

“This is a clear indication that our coordinated global strategy to elevate the Champion brand is driving increased demand for the product,” he said. “And based on our bookings, we expect strong double-digit growth to continue through the first half of 2019, putting us ahead of schedule in achieving our $2 billion revenue goal.”

Ram said he sees “lots of opportunity to grow our existing distribution in the U.S.,” while at the same time expanding in Asia and Europe.

At the investors’ day, Tomohiko Hirano, vice president and managing director of Commercial Asia for Hanesbrands, said 35 percent of Champion’s European business comes from Italy, but the company wants to grow in France, Germany and the U.K. as well. Its presence there is mainly in the wholesale channel.

In Asia, however, Champion stores are the growth engine. Through a partner, there are now 41 stores in China last year and Hirano said the company expects to have over 250 stores in the next few years in China, South Korea, Taiwan, Hong Kong and Australia. All told, there are 94 stores in the Asia-Pacific today.

In the U.S., Champion opened its first full-price stores in 2018, starting with Los Angeles, and then expanding to New York City, Chicago and Boston.

Ram said the company “will look at very select markets” to add stores “where it makes sense.”

Looking ahead to the next century, Ram said he feels a “real sense of responsibility to be part of the team to craft the next 100 years.”

Robertson attributed Champion’s longevity to the “authenticity of the brand. It’s always been consistent and it has a heritage that not many brands can speak to — and consumers respond to that.”

And for Hanesbrands corporate, Champion continues to be its brightest light.

Evans summed it up this way: “We’re well positioned to beat our goal of getting to that $2 billion number and to keep the momentum in the business in 2020 and beyond from the standpoint of growth. It’s really exciting what’s going on with that business.”