China Has Become a Testing Ground for Luxury Brands

Product launches are being moved to China and high sales targets are set, hoping to offset the losses from the rest of the world.

With much of the world still in lockdown to slow the coronavirus outbreak, China has become the best hope for luxury and fashion brands eager to get tills ringing again, making it a key launchpad for products and a testing ground for innovative marketing approaches.

Dior, for example, introduced Gem Clutch, a bespoke hybrid between fine jewelry and fashion handbag in China on WeChat on Friday before the brand begins to roll it out in the West. A day before that, Dior released a video featuring its China ambassador Angelababy touring its Shanghai flagship at Plaza 66 as a virtual shopping trip to promote the new Book Tote and Lady Dior bags.

The video gained 297,000 likes, 97,000 reposts and 43,000 comments on Angelababy’s Weibo post. It’s also understood that Dior will follow the path of Louis Vuitton, Burberry and Longchamp and host livestreaming events. But instead of engaging with China’s expansive online audience, Dior’s session is expected to be invitation-only for its VIPs.

Burberry recorded 1.38 million in engagement with its livestreaming debut with Tmall. Six out of the 10 products introduced via the streaming, including handbags and earrings, promptly sold out.

Josie Zhang, president of Burberry China, said, “In the past two months, we have seen a visible change in the behavior of Chinese consumers. We are very happy to be able to connect with so many consumers with livestreaming on Tmall. Consumers are eager for new things, and for us, when some consumers are unable to experience off-line boutiques because of the epidemic, livestreaming happens to be a safe and exciting way to bring them fresh experiences.”

Besides the trend toward livestreaming, WeChat Mini Programs, which were at the top of luxury brands’ minds in 2019, continue. These — along with Tmall stores and an official presence on various social media channels including Weibo, TikTok, Xiaohongshu and Shipinhao, which is WeChat’s answer to Instagram — are helping brands build a 360-degree digital ecosystem that brings them closer to customers, making direct-to-consumer sales easier than in most other regions of the world. 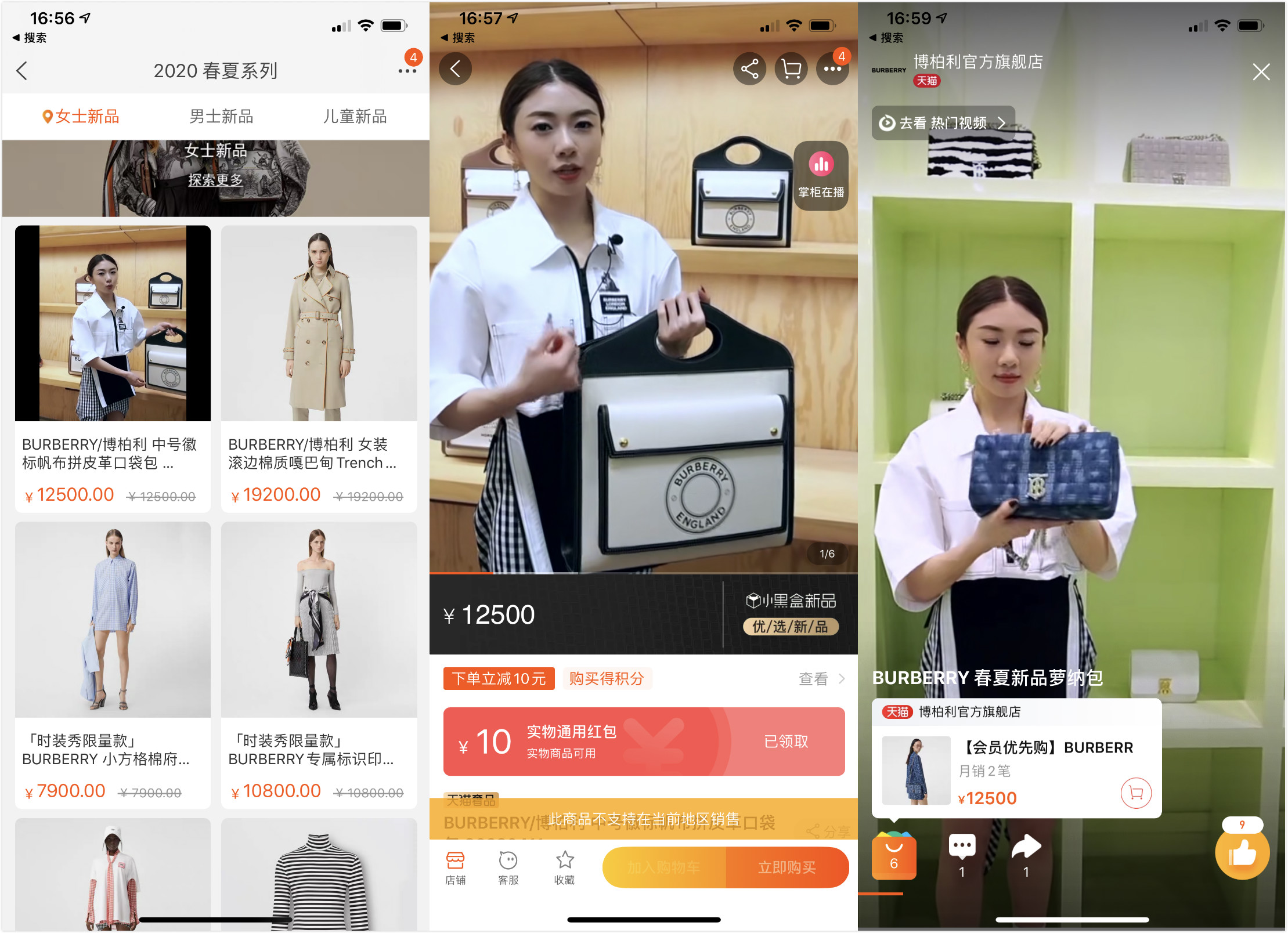 Luxury brands are banking on China, which is quickly recovering from the outbreak, to get revenues flowing again. Brunello Cuccinelli said sales in China saw improvement in the first 10 days of March and over the past few days, after significant drops since the last week of January and throughout the month of February.

It’s not yet clear whether signs of improvement will become major gains. Chinese luxury consumer confidence is down, according to consultancy firm China Luxury Advisors. Bubble tea and hot pot are two inexpensive treats experiencing an instant surge in demand after lockdown measures were removed, as reported by local news. But brands are working hard to create desirability to move items off the shelves as fast as they can.

“People haven’t been shopping for three months. There is definitely a resurgence, but I am worried about what’s to come in two to three months’ time. We are supposed to receive samples for pre-fall and fall-winter collections now, but since factories stopped working from March in Europe, I hope we will be able to get them by May, or it will be difficult for us to help promote them,” Lu said.

Meanwhile, an account director at a global fashion agency’s Beijing office, who requested anonymity, said its sample room has been empty since late March. And two other agencies confirmed to WWD that sample requests are reaching a historic high.

“I can feel that China is the last straw for many of our clients. All the new product launches are being moved to China, as it’s the only place where shops are open. But store openings, previews and fashion shows are still being canceled or postponed before Q3. It’s very risky because the government hasn’t signaled a clear attitude on hosting events. You still need to self-quarantine for 14 days if you are coming to Beijing and no one wants a COVID-19 carrier showing up at their events,” the director added.

“Instead of being overly commercial to leverage the pandemic, it’s important to offer products or services to help people ease into a new norm, whether through digital migration or domestic consumption,” she said.

While online innovation is helping brands reach a wider audience, physical retail still brings in the majority of revenues.

Hermès is aiming to hit the 40 million renminbi, or $5.7 million, sales goal for its renovated store for the rest of April in Guangzhou’s luxury landmark Taikoo Hui, which is set to open on Saturday, according to a source working in luxury retail.

The amount is a bold monthly target. Only the flagships in China of the top luxury brands, such as Chanel and Louis Vuitton, are able to reach that number, the source said, adding that the rest of Hermès’ stores in the country will be supporting the Guangzhou unit to hit the target within 20 days.

In Shanghai, 80 percent of the business had recovered by early April, said a sales associate at Louis Vuitton over WeChat. Loyal customers have returned, exotic leather bags sell just as well as iconic monograms, but walk-in sales haven’t rebounded. The brand’s spring runway collection is nearly sold out, and now customers are snatching up the summer collection.

A China sales manager at Porsche said its headquarter have asked the dealer to hit its 2020 target despite a visible drop in January and February.

“Our goal for this year is to sell 90,000 luxury cars, which is more than the entire Europe[an continent] or the U.S. We have had 10 percent annual growth for years. The performance of the second half will be crucial. But I am not too worried, our clients come from a wide range of backgrounds and if they don’t buy it now, the car will no longer be produced as our factories in Germany are shut,” the manager said.

The Outside View: Consumers Will Shop Again