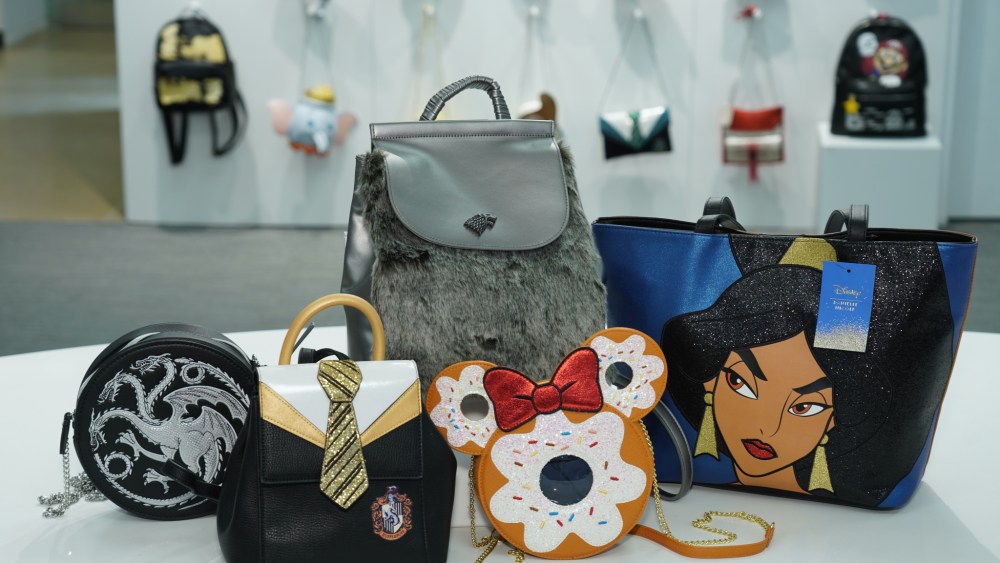 Concept One Accessories, which designs and produces an array of licensed cold-weather accessories, handbags, backpacks and luggage, has purchased the Danielle Nicole handbag and accessories business from Artisan House.

The Danielle Nicole brand has a track record of ties to pop culture, designing and developing kitschy co-branded bags depicting characters and representations from such commercial hits as “Game of Thrones,” “Harry Potter” and Bugs Bunny through licenses with HBO, Disney, Warner Bros. and Nickelodeon. “Lion King” handbags are coming soon.

“We can grow the Danielle Nicole brand really quickly,” Sam Hafif, chief executive officer of Concept One Accessories, told WWD in an interview at the firm’s 18,000-square-foot showroom and design headquarters at 1411 Broadway in Manhattan.

Right off the bat, Concept One Accessories will be drop-shipping Danielle Nicole merchandise to fulfill orders from such web sites selling the brand. Hafif also cited the possibility of extending the Danielle Nicole distribution to additional retail doors and web sites and expanding the scope of the collection with cover-ups, headwear, cold-weather accessories, watches, jewelry and footwear. Airport shops are part of the vision, too, possibly with Hudson News, which operates Coach, Tumi and other airport shops.

Hafif is also eager to elevate the public profile of the slender, 5-foot, 11-inch DiFerdinando. She   travels extensively in North America and Europe for store appearances and events and to China to check on production and quality control.

“When Danielle walks into a room, the whole place lights up,” said Hafif. “I really want to promote her. The trade knows her very well. But I want to get her out in front of the consumer more. She also should be attending all the runway shows.”

The 32-year-old began her fashion business in 2004, at the age of 18. While attending the Fashion Institute of Technology, she studied abroad in Europe and apprenticed at several design houses. Upon returning to the U.S., she began designing and constructing her own handbags. She was interning at Bergdorf Goodman when the cosmetic buyer noticed DiFerdinando sporting her bags and asked her to create a line of cosmetic bags for the store. That led to fuller collections for Bergdorf’s as well as Neiman Marcus, Saks Fifth Avenue, Bloomingdale’s and Lane Crawford.

Hafif met DiFerdinando earlier this year at a mutual friend’s Shabbat dinner, though he was already familiar with the product, having been impressed by the cobranded Danielle Nicole/Cinderella bags at a Disney summit in Anaheim, Calif. “Her designs are very dimensional. They’re not flat. The shapes are unique and all the appliqués are so creative,” said Hafif.

“I wanted to find a partner to grow and globalize the Danielle Nicole brand,” said DiFerdinando, seated with Hafif in the showroom last week. “What stood out for me is that Sam and his brother Bernie have a vision. They run a company with a real attention to detail, quality and design,” added DiFerdinando, whose middle name is Nicole. Bernie Hafif is in charge of operations and licensing at Concept One.

Last year, Concept One Accessories acquired the Ful intellectual property from Sequential Brands, after signing the exclusive license for Ful backpacks and luggage in 2014. Justin Timberlake was an investor in Ful.

In 2008, the company bought Block Headwear, and there have been a few other smaller acquisitions.

The 20-year-old Concept One continues to be acquisition-minded, to expand its portfolio of owned brands alongside its established licensing division. “It’s part of our strategy. I want to make two acquisitions before the end of the year,” meaning one more after Danielle Nicole, said Hafif. “We have a pipeline.”

He suggested there’s no shortage of buying opportunities. “Supply chains are complicated. A lot of smaller companies are not able to navigate that,” Hafif said. The situation is further complicated by the Trump administration’s tariffs on imports from China, which are impacting the handbag sector in particular.

“There are opportunities for stronger companies to make strategic acquisitions and scale up,” Hafif said. “We are looking to leverage our infrastructure across related categories, and gain market share.”

Concept One has more than 60 licenses, from such famous brands and entertainment names as The Beatles, Robert Graham, WeSC, Peanuts, Disney, Coca-Cola and Marvel, as well as NASA and Advance Auto Parts, designing, manufacturing and marketing headwear, backpacks, cold-weather accessories, leather goods and luggage under the various labels. One of Concept One’s latest licenses is with Line Friends from Korea, which has a store in Times Square and dozens of others in Asia. For the next election, Concept One is planning “Vote for Snoopy” caps.

At one point, the company, which has a team of 65 in New York and 50 in Shanghai, was managing more than 10,000 stockkeeping units. Of late, it’s down to around 6,000. Managing and tracking all that product can be tricky, but Concept One developed a product lifecycle management system, WebTech, to manage through the product lifecycle from CAD all the way through to license submissions, and production. The platform links with the company’s enterprise resource planning system.