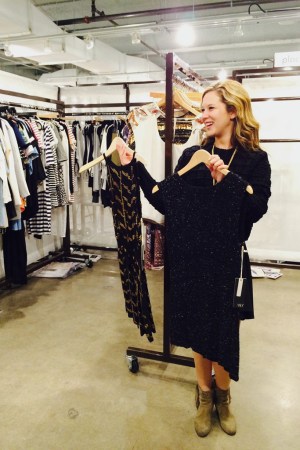 “This show was more diluted than usual,” said Cassady Hart, owner of Twnz Showroom. “We’ve already had markets in L.A., Coterie [in New York] and Vegas, so this is the last market of the season. And the weather has been horrid.”

“We hosted more lines in March 2014 than we ever have in the history of FIG,” said Emma Greathouse, director. “We were completely sold out of temporary booth space and permanent showroom space.”

The show spotlighted Cammy Herbert and Cologne Schmidt, the chatty young designers of Show Me Your Mumu. Their three-year-old line of flowing gypset tops and dresses in exclusive chiffon prints, velvet and lace is expected to do $5 million in business this year, they said.

“Dallas is my favorite market,” Herbert said. “Our biggest customer is in the South.”

Run by “all girls” under 30, with family and friends pitching in on photo shoots, Mumu manufactures in Los Angeles and sells to 250 specialty stores and through its own Web site.

State, a young-contemporary division of Bernard Chaus, introduced its fall line at the show after an exclusive first season at Nordstrom.

“They came to us and said we want a contemporary line that retails at $100 to $118, but it’s higher now,” said Michelle Hassloch, sales director. “I’ve done well with our essentials — $58 [wholesale] polyester chiffon tops, layering pieces and crop tops.”

Retailers reported generally lackluster business in January and February, with some pickup in March.
“I hate to blame it on the weather, but if I were a shopper I wouldn’t want to take my clothes off either,” said Carrie Schwartzenburg, owner of Raspberry Rose in Houston.

She picked up immediate and fall deliveries of item tops, dresses and jackets by Drew, Bailey 44 and Michael Stars, plus Joe’s Jeans and jewelry by Three Bishops, Virgin Saints & Angels and Chan Luu.

“I’m looking for more contemporary tops that are more hip,” Bauerle said. “I think [designers] have been searching so hard for unique that they have gone way over the top. I like that there are some people who take a more sophisticated look with better fabric, better fit and cut, and don’t have to be excessive.”

Oralia Newton gathered Cheryl Dufault’s semiprecious necklaces dangling Buddhas and other pendants for Only Boutique in Laredo, Tex. The city experienced an unusually cold winter, but business held up due to an influx of wealthy Mexicans from across the border in Nuevo Laredo and royalties from the Eagle Ford Shale.

“I think I’m going to buy a little bit more,” Newton said. “I have only one piece left of Cheryl’s one-of-a-kind necklaces. I also buy Chan Luu’s sterling rosaries and linen by Jen’s Pirate Booty and C.P. Shades.”