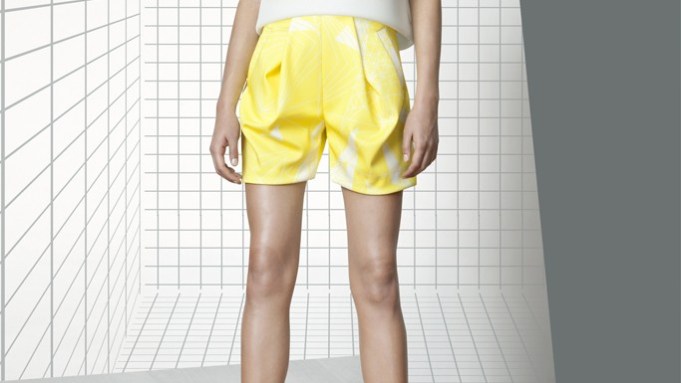 MILAN — Exhibitors at women’s wear and accessories shows White, Milano Prêt-à-Porter and Super were touting quality European craftsmanship. But because of rising material costs, prices are being set at luxury levels.

Neophyte designers at September’s round of three-day fairs said their retail prices are running in-line with accessible luxury — between about 200 and 1,500 euros, or $270 and $2,028 at current exchange — as prices climb for skins across the board and precious textiles like silk.

“Silk prices have gone up about 5 percent [year-on-year]and they are still going up,” said Turkish silk scarf maker Pinar Yegin, codesigner of Rumisu, a brand she runs with her sister, designer Deniz. They showed at Super.

Ghanaian shoe designer Afua Dabanka, of London-based Mo Saique, said she saw a 10 percent rise in crocodile, cow and pony hides this year versus last. Her shoes, shown at Super, sell between 150 and 400 pounds, or $240 and $640.

Exhibiting at White was Thomas Lieuvin, a 25-year-old shoe designer from Paris. The exotic skins of python and water snake that line his sleek heels are purchased from LVMH Moët Hennessy Louis Vuitton and Hermès.

Throughout Italy’s trade shows, exhibitors have noted a rise in prices of exotic skins since larger luxury players have invested in reptile farms and exotic skin tanneries, thus consolidating the market to secure their supply and weather price fluctuations.

“Milan is a good place for me because we meet buyers from the Middle East, Switzerland and Monte Carlo,” Lieuvin said, adding that this White exhibition marks only his third collection.

In 2012, Caballero, who started his brand with his sewing machine in his bedroom, was invited to participate as a finalist at Who’s on Next?, organized by Vogue Italia and AltaRoma. Items within his neo-retro collection crafted with silk blends and enhanced with hand-cut appliqué and crystals, run from about 250 to 1,200 euros, or $338 to $1,620.

“Vogue Italia was a huge support in terms of visibility,” Caballero said, adding that his clothes now sell in boutiques in South Korea, Japan, Russia and the Middle East.

White president Massimiliano Bizzi said, despite the challenges, White designers in the past have gone far, citing Stella Jean as an example. The Roman-born designer of Italian and Haitian origin was invited by Giorgio Armani to show at his Milan Theater on Via Bergognone during Milan’s women’s ready-to-wear shows, which ran parallel to the trade fairs.

“These brands are in the most important department stores in the world and have had great commercial and press success,” Bizzi said.

“It’s hard to keep our prices low,” Lenoci said, explaining that the organic tanning process for her lightweight handmade horse leather bags takes up to 40 days.

Despite the high price tags, scouting young talent is a priority for Alessandra Rossi, commercial director of multibrand for Yoox Group. In general, she explained, Yoox is committed to seeking out fresh proposals by young designers alongside well-known fashion names.

“It’s a feature that identifies us and for which clients recognize us; in fact, each season we try to innovate and update our proposals with new offers,” said Rossi.

Looking ahead to 2014, Pitti Immagine ceo Raffaello Napoleone said it will take another two months to gauge a forecast for exhibitors here, but there is an air of change.

“In general, I believe that 2014 will mark an inversion of the ongoing [negative] trend,” Napoleone told WWD. “In a moment like this, trade shows are even more instrumental for the most sophisticated department stores that are committed to researching trends.”

Napoleone noted that Super is continuously trying to give space to brands that craft sophisticated niche products and are able to offer “value for money.”

“We need to continue with this strategic vision and bring to Mipap ready-to-wear companies whose products are in line with our trade show,” said Marco Serioli, Fiera Milano’s exhibitions director.

Super, in only its second edition since unifying Touch, NeoZone and Cloudnine, hosted 235 collections with about 5,500 buyers, up about 11 percent since February’s edition. White hosted more than 12,000 buyers and 440 collections, with the number of foreign buyers rising 8 percent and the number of Italians rising 4 percent year-on-year. Mipap organizers would not release the total number of buyers present, but said it profiled 3,500 buyers and noted a rise among Russian, American and Japanese buyers. Mipap saw its number of exhibitors drop to 150 from 170 in February.

Alessandra Rossi, commercial director of multibrand at Yoox Group, said, “There is still a strong trend of floral prints and micro-geometrics on skirts and pants. The fabrics are fluid with metallic colors — especially in pinks and coppers.”

Among other key trends:

• Pescara, Italy-based Chiara Angelini said she was inspired by an “imaginary world” for her collection of rhodium, gold and rose-gold colored earrings with Swarovski Elements.

• A-Lab used cotton, crepe and silk blends, as well as polyester and PVC, in order to achieve a 3-D, “Star Trek”-hero look for peplumed tops.

• Coliac’s spring accessories collection had a Twenties-Thirties theme, utilizing materials like aluminum, steel and mirrors mirroring architecture of that era.

• Mo Saïque, designed by Afua Dabanka, a London-based shoe designer of Ghanaian descent, lit up the trade-show floor with vibrant colors and shapes in her Miami Beat collection inspired by the city’s Art Deco skyline.