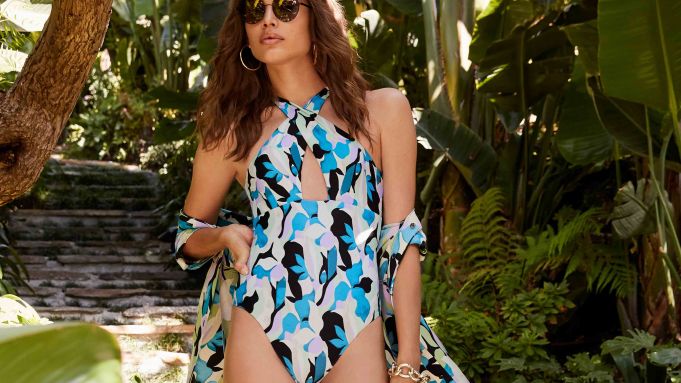 Diane von Furstenberg is getting into the swim of things.

For holiday, she has teamed with Onia for a resort 2019 swimwear capsule collection. The collection features DVF prints showcased on Onia’s signature bikini and one-piece silhouettes.

The collection features eight styles. The bikini tops and bottoms retail from $95 to $110 apiece, while the one-pieces retail from $195 to $225. The line will be sold in all DVF stores domestically and internationally, online at DVF.com and Onia.com, starting today.

The capsule contains some of DVF’s heritage prints including leopard, which first made its appearance on the wrap dress in 1974. The print is reimagined onto the swimwear styles with pops of teal and sky blue. Also in the collection are the classic twigs and lips print. The twigs were created by DVF in the Seventies. The archival lips, which von Furstenberg designed as a symbol of love, were inspired by Andy Warhol’s 1984 Pop art.

Nathan Romano, cofounder of Onia, said the DVF collaboration came about after connecting organically on Instagram. He said that the venture is “an ongoing collaboration planned through 2020.”

“It’s been an amazing experience working with Diane and working on in-line prints, alongside some of their archive prints,” said Roman.

Von Furstenberg has included swimwear in its previous collections but this is the first time the company has collaborated on a swim collection with an outside brand. She said she’s happy she could partner with Onia “and merge our heritage, iconic prints with a modern brand.” The collaboration will continue through spring 2020 and will extend into coverups and beachwear “as we lead into the height of vacation season,” the designer said.

Onia has done successful swimwear collaborations with Danielle Bernstein, founder of the blog We Wore What, which has since turned into a license for We Wore What swimwear; Theory; Mr Porter, and Every Mother Counts.