Runway of Dreams to Celebrate Disabled Community During NYFW

Tommy Hilfiger, Zappos, Kohl's and Nike will be featured at a show on Sept. 5.

A model on the runway at the Runway of Dreams show in 2018.

Courtesy of Runway of Dreams Foundation

When Mindy Scheier, a former designer for the Inc brand and stylist for Saks Fifth Avenue, gave birth to her second child, her life was changed forever. But it wasn’t just because she became a mom — it was because Oliver was born with a rare form of muscular dystrophy.

She quickly learned that people with disabilities struggle with tasks that the rest of the population take for granted. That includes dressing themselves. Oliver was challenged by buttons and zippers and getting jeans on over his braces. So when he reached school age, she dressed him in sweatpants and sent him on his way.

But when Oliver was eight, he asked his mother why he couldn’t wear jeans to school like the rest of the kids. “That was an a-ha, kick-in-the-gut moment for me,” she said. “Here I am working my whole career in the fashion industry and I forgot the most important thing: that your clothes identify you and give you self-esteem. I needed my eight-year-old to remind me.”

That night after Oliver went to bed, his mother took a pair of his jeans, and “ripped them apart,” taking off the zipper and slicing the seams open She reattached the pants using peel-and-zip Velcro closures and presented them to Oliver when he woke up.

“I witnessed an unbelievable transformation,” she said. “He could now dress himself and look like everybody else.”

It also opened up a whole new world to Scheier. She discovered that more than 60 million Americans and 1 billion people worldwide have some sort of disability that makes getting dressed a challenge. People without limbs, dwarfism, mobility issues and physical and cognitive issues. But most of the “adaptive” clothing options were geared to the elderly. 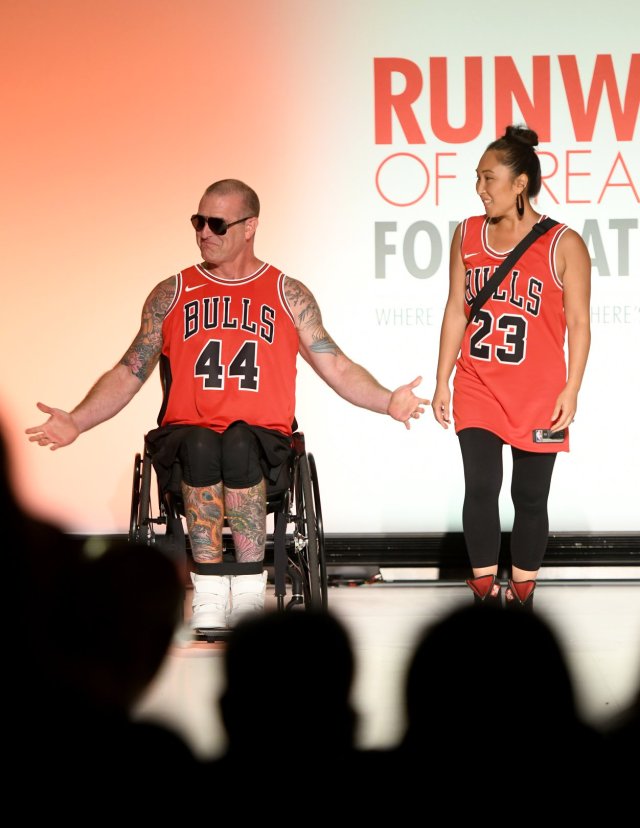 It’s a big business. Estimates are that the global market for people with disabilities will hit $400 billion by 2026.

So Scheier created the Runway of Dreams Foundation, a nonprofit organization that works with the fashion industry to create a culture of inclusion and acceptance. The first to jump on board was Tommy Hilfiger, whom she worked with to create an adaptive clothing line for kids in 2016. Since then, other big brands have joined the cause, including Zappos, Kohl’s, Nike and Target.

Now, on Sept. 5 during New York Fashion Week, Runway of Dreams will host an adaptive fashion show and gala at Cipriani on 42nd Street in New York. The show will feature more than 40 models of all abilities including “America’s Got Talent” ​Mandy Harvey, ​model and ​actress ​Jamie Brewer and Fashion Revolution honoree Madeline Stuart. ​They will wear looks from Tommy Hilfiger, Zappos and Kohl’s along with shoes from Nike.

The event will also feature ​Runway by SAP​, an app that allows consumers to watch the show and provide feedback to the designers on the outfits they saw, receive details on each look and hit a “buy now” button to purchase.

This will mark the fourth Runway of Dreams event, but is the largest to date. The sold-out event will be hosted by Jill Martin of NBC’s “Today” show, along with TV personality Carson Kressley.

“The event is a celebration of all the progress our industry has made throughout the year. We are humbled by the volume of participants and volunteers and incredibly thankful for the support of this year’s sponsors,” Scheier said. “People with disabilities are the largest minority on the planet. Adaptive clothing is the next plus-size or petite. It’s just a different fit. And eventually, we’re all going to need it.”