Diesel USA Embarks on Path to Profitability in 2021

The company, which filed Chapter 11 in March, emerged from bankruptcy in April with a three-year turnaround plan that's gaining traction.

Diesel USA is adding fuel to its turnaround plan.

After filing for voluntary bankruptcy protection in March, Diesel USA, a subsidiary of Italian parent company Diesel SpA, received approval of its Chapter 11 plan in April. It has now outlined an aggressive plan to return Diesel U.S.A. to profitability in 2021.

Stefano Rosso, the 40-year-old chief executive officer of Diesel North America, spoke for the first time about the U.S. company’s bankruptcy and how he feels the brand has emerged much stronger and ready to tackle new growth opportunities.

“It’s quite normal as an action in the U.S., but the word bankruptcy gets bigger headlines in the media. The reason we filed Chapter 11 is we wanted to get out of this specific moment of our life lighter and stronger than ever,” he told WWD in an exclusive interview. He said it was an action to get out of some retail leases that were dragging the unit’s profit and losses down.

At the time of the March bankruptcy filing,  Diesel USA operated 28 stores across 11 states, consisting of 17 full-price locations and 11 factory outlet stores. Diesel USA had $100 million in assets and about $50 million in debt. The company attributed the bankruptcy to plummeting sales, a failed turnaround, expensive leases, unwavering landlords and several instances of cyber fraud and theft. The U.S. division listed $7.4 million in unsecured obligations to trade creditors.

In April, when Diesel received approval of its plan, all terms of the commitment were agreed to, including the release and payment of a little more than $26 million to fund the plan, with $10 million in additional funding going toward the reorganization. The court gave its ruling in seven-minute record time. The company paid all its vendors and creditors in full, leaving Diesel’s balance sheet clean of debt, with a complete three-year turnaround plan.

• Strengthening its e-commerce business, and

According to Rosso, the son of Diesel founder Renzo Rosso, what’s happening in the retail environment “is almost a detachment” between the economic value of a retail store versus the request for high rents coming from landlords that rarely leads to financial gains. He said the brand needed to get out of five of 28 stores that were dragging the P&L down. Those were two full-price stores in New York (on Madison and Columbus Avenues); one in Hawaii; one in Orlando, Fla., and an outlet in Texas.

“The leases were not making sense for the amount of business we were doing. The action that was done was a business action. We saw this as an opportunity to accelerate our process of turnaround and gain an opportunity to reset and go even faster into our three-year plan,” he said.

Rosso said he wants to completely reshuffle the brand’s retail presence in the market, and the company has a new store concept it recently revealed in Copenhagen on May 2. The concept has already opened in Shanghai, Shenzhen  and Beijing, as well as Tokyo and Kyoto.  The plan is to have a number of additional, refreshed locations opening worldwide throughout the rest of the year, including the U.S. 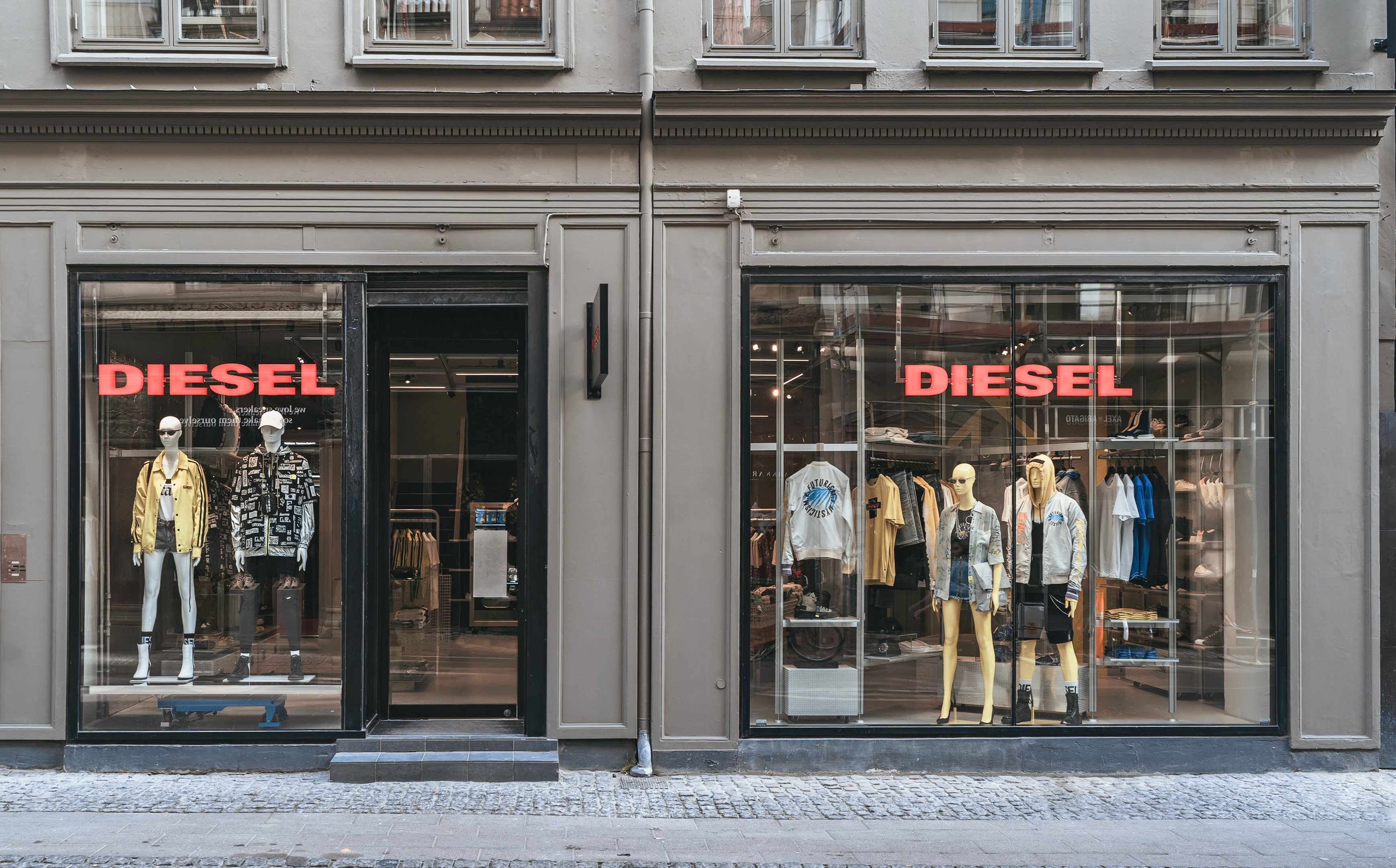 The core aspects of the retail experience revolve around flexibility and an easily changeable store layout based on collections, consumer demands, trends and activations, as well as an “open-window” approach that allows for more transparency into the store’s inner workings. There’s also a rolling library of stock and personalized  facades that will be rendered in partnership with local street artists. The first North American store to launch with the concept will be Miami Lincoln Road, slated for a September opening. 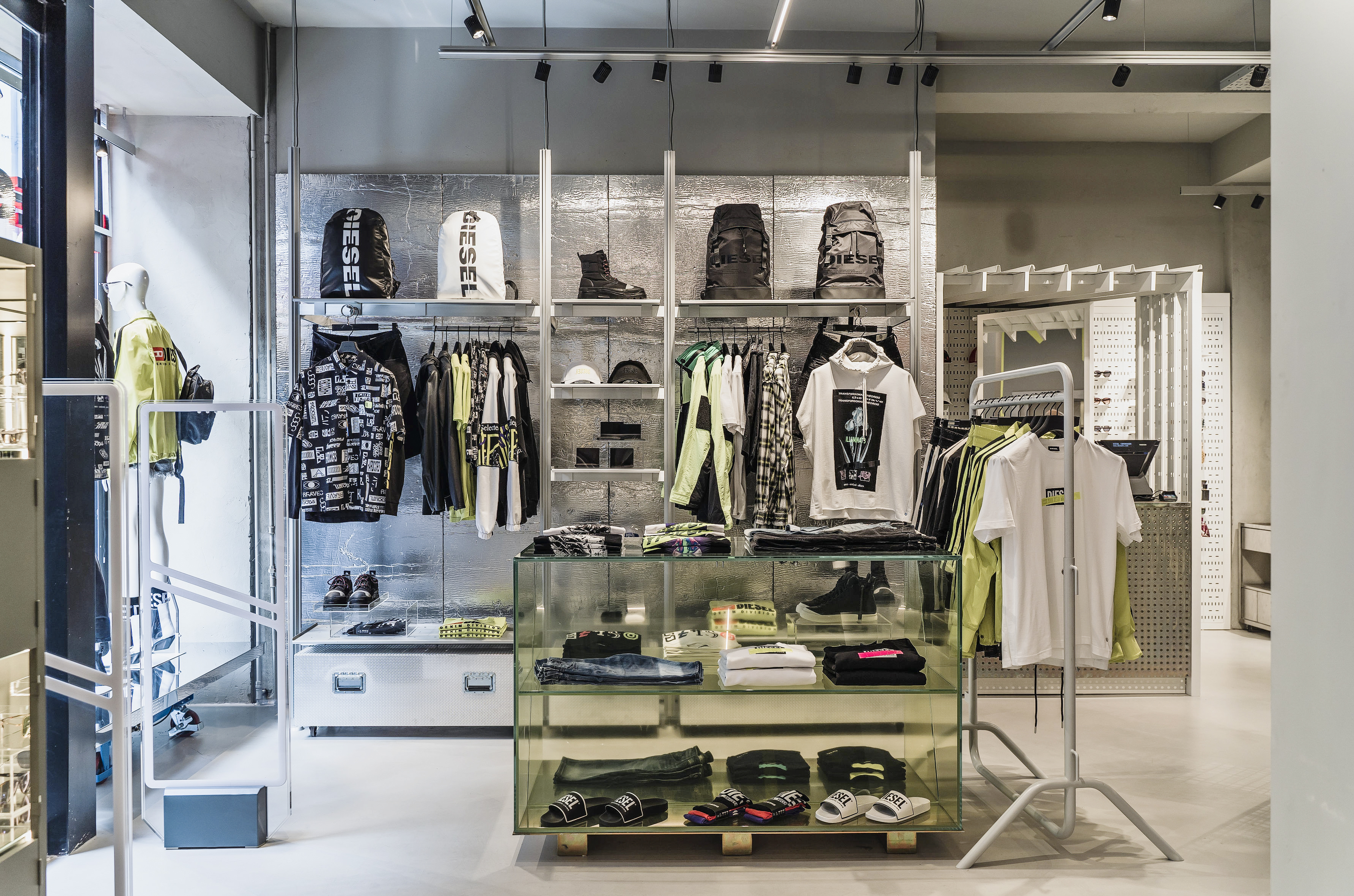 Diesel’s Copenhagen store has been remodeled in a modular fashion.  courtesy shot

Rosso said the stores will have smaller formats and in a modular design. “Nowadays, retail should be an opportunity to be a more dynamic touch point with customers. You no longer need a huge cathedral to represent your brand,” he said.

By yearend, Diesel looks to have 20 full-price stores in the U.S., and over the next three years, the company believes it will have between 30 and 35 full-price stores. Of the stores already in existence, many will be remodeled, refurbished, or their locations changed within the same city. Two of those that will be refit are in Atlanta and South Coast Plaza in California.

In addition to these stores, Rosso believes it’s more interesting now to sign a short-term lease for a pop-up store for two reasons. One reason is economics because a brand can get good deals, and another is that it enables a company to be more experimental. Diesel just opened a pop-up in the Miami Design District for one year called the White Box Project. Every month they have something new, a collaboration, or a special line that is being launched. Overall, he would like to have two to three pop-ups a year. They would account for about 10 and 15 percent of the brand’s retail network.

Diesel USA has also taken a cleaver to its distribution over the past two years. Wholesale accounts that were not in line with its premium distribution strategy were cut. “Now we have a very healthy network of fewer, but better doors,” Rosso said. The company sells at Saks Fifth Avenue, Bloomingdale’s and Neiman Marcus. Among its specialty store accounts are Opening Ceremony, Social Status, Dover Street Market and Live in New Orleans.

Diesel is working on several collaborations at different touch points. The firm has had product and lifestyle collaborations this year with Playstation, Pride, Alpinestars and Netflix/Moneyheist.

The most important platform, Diesel Red Tag, hosts emerging designers tasked with creating capsule collections from the heritage of Diesel archives to reimagining denim. It started with a first edition by Shayne Oliver of Hood by Air, followed by Glenn Martens of Y/Project. This year has already seen a collaboration with Gosha Rubchinskiy’s  GR-Uniforma, launched last May in Berlin. The next one in September will be A-Cold-Wall. He said everything is gender-neutral. “It’s the cherry on the cake. It’s where we represent our best creativity and top class production and we collaborate with great partners,” said Rosso.

Diesel is also developing 143 Diesel Living-designed residential units in the arts district of Wynwood in Miami. All the common spaces will be designed by the company. Presales kick off at a launch event in September.

In discussing the target customer, Rosso said the company has the customer who grew up with the brand, as well as a younger consumer who doesn’t know it yet, but the firm needs to get to them with the quality of the jeans it makes and “the cool projects and cool approach we have now.” 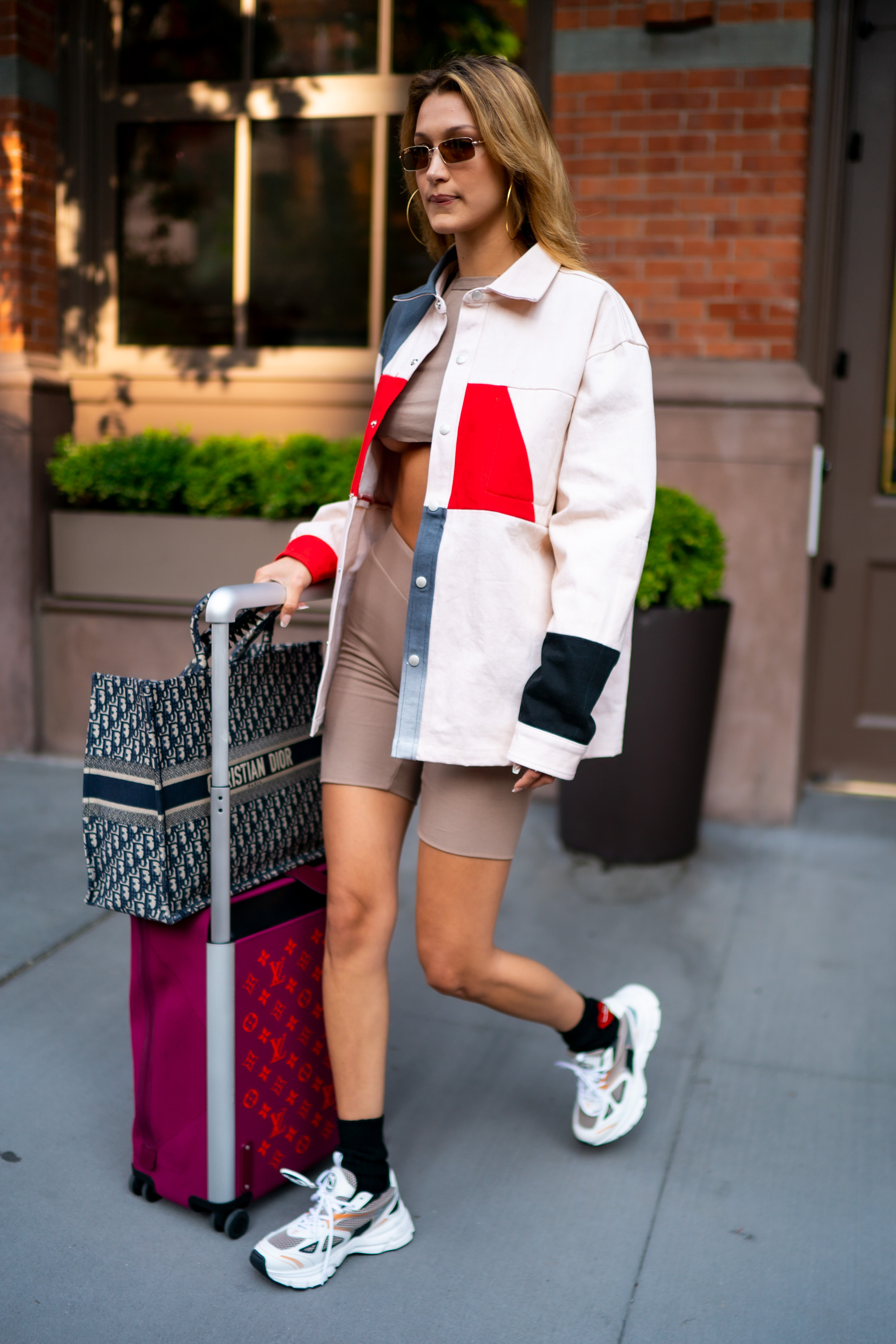 Diesel USA continues to do irreverent advertising and marketing. Last year the company secretly opened an authentic knockoff store called Deisel [sic] on New York’s Canal Street. The items it made were actually one-of-a-kind pieces specially crafted by the Diesel design team disguised with fake Deisel branding. The Deisel capsule collection was a playful take on the Diesel red box logo printed on Ts, sweatshirts and hats. It was a complete success, said Rosso.

Turning to e-commerce, where the company tests and learns what works and then develops it in other markets, Rosso said it’s an expanding part of the business. “E-commerce keeps on growing double digits. We grow 15 to 20 percent every month. For us, it’s the future. The future is to link the retail environment with the digital environment through omnichannel action and activity,” he said. The company is implementing a back-end system that provides a frictionless and consistent customer experience across off-line and online channels, integrating all stock inventory and omnichannel payments.

By the end of the three-year plan, Rosso said he expects Diesel US.A. will be profitable again. He called the biggest challenge meeting the demands of today’s smart customer. “I don’t want to forget our existing customers. We’re working on a binary strategy to cater to the older generation and to a younger crowd. We’re trying to talk to them through product and communications, that’s the most challenging part,” he said. To that end, doing drops are mandatory. It used to be one campaign a season and that was it. “Today the customer wants variety. Brands that don’t understand that won’t make it. She wants multiple drops in season and multiple projects through the season. My goal is to have something fresh, new and interesting every two to three weeks,” he said.

Diesel is designed by a design collective, and one collection is distributed worldwide.

As reported, Diesel USA’s annual sales in the wholesale and retail divisions have declined substantially since 2014. Net sales in 2018 were $72.5 million, or $38 million from the full-price business and $34.5 million from the outlet operation. That’s compared to  volume of $125 million, or $83 million at full-price stores and $42 million at the factory stores in 2014. The wholesale channel had volume of $19 million in 2018, versus $61 million in 2014. At the filing, the company said it was also hurt by a substantial number of chargebacks at its wholesale customers. Diesel USA was also a victim of multiple incidents of theft and fraud over the course of three years, leading to losses of about $1.2 million. The company has lost money for six straight years.

Looking back on the bankruptcy, Rosso thinks it was a difficult decision but the right move. “My personal feeling was before we did it, being a family business, I had second, third and fourth thoughts. After we’ve done it I realized it was a just a business tool and we should have done it way earlier. It was literally an accelerator and a business opportunity. I wish we would have done it earlier than we did.”