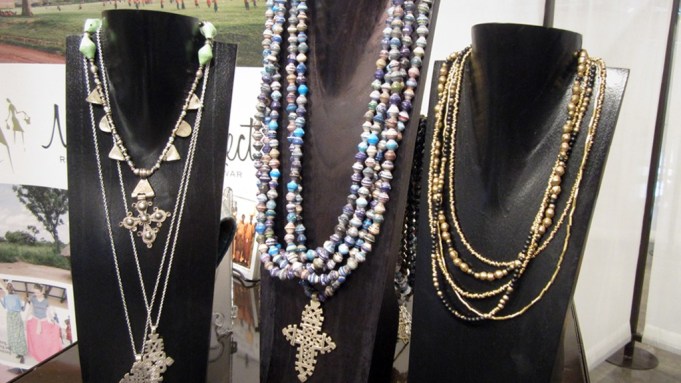 “It was a more relaxed look, which I’m excited about,” said Kelly Mathews, co-owner of Hemline boutique in Dallas.

Several retailers reported that business has been stable and their open-to-buys were flat as they shopped for clothing that would hit the sales floor from December through March.

“Color and prints are huge, and I don’t see it ending,” said Sharon Hardesty-Price, a partner in J. Hampton contemporary shop in Houston.

“They all want spring and are ready to buy it,” said Mark Williams, a partner at Level Showroom, which did brisk business with dresses and tops by Show Me Your Mumu. “They are looking for prints that are hipper than traditional sorority stuff.”

It marked a change from a year ago, when retailers were buying close to need and showed less interest in spring goods. That’s partly because manufacturers increasingly are mandating earlier cutoffs for orders to get a better read on fabric and production needs, noted Suzanne Collier, owner of S. Collier showroom.

“Business was so difficult after 2008 that manufacturers were trying to accommodate [late ordering],” Collier said. “It created a monster and goods started to run late. If you end up with all those extra goods, then you worked that whole season for nothing.”

The emphasis on resort also reflected a shift away from glittery holiday fare by some retailers.

“Nobody comes in looking for stuff to wear to parties anymore,” said Mary Stone, longtime owner of Joni’s Boutique in Plano, Tex. “They want a great top.”

Longer lead times dovetail with a trend toward retailers receiving seasonal fashions earlier. Ali Crittenden, manager of WBC Showroom, said many of her retail accounts accepted fall goods in May and June to have more time to sell it. At the show, WBC’s bookings wound up about the same as last year, Crittenden said.

“They’re playing it safe because of e-commerce competition, the weather and also because there are more lines for them to buy,” Crittenden said.

Shannon Moffitt, owner of Makie Black Boutique in Amarillo, Tex., kept her budget flat as she purchased distressed and higher-waisted jeans by Level 99 denim and Paige Denim, plus dresses and tops.

Describing her Panhandle clientele as “pretty conservative,” Moffit added, “Everyone is going into a more casual feeling — knits, T-shirts. People aren’t dressing up as much as in the past.”

Paige and Darren Logsdon shopped for the contemporary store they are opening in Bee Cave, a small, high-income suburb of Austin, Tex. The area has drawn people moving from New York and California, they pointed out.

“Most of the time Paige has to drive downtown to shop or to the Domain, which is 45 minutes, so we’re filling a void,” Darren Logsdon said.

“My clientele looks for gifts under $100 — Kris Nations’ simple Texas pendant, initials, side crosses,” she said.

“Color is not as big anymore [in jeans],” Doan said.