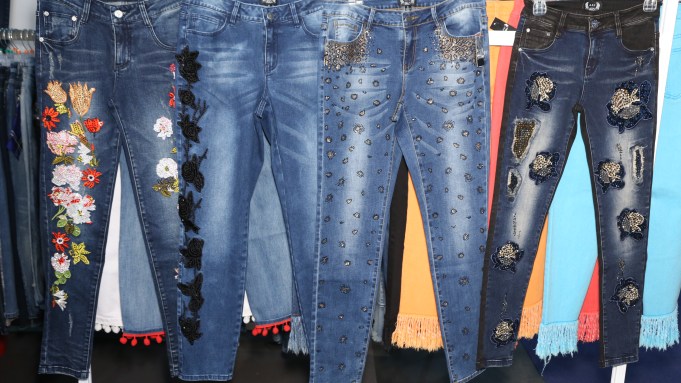 The two big trends for fall in the middle-market arena are embellishment and color, and lots of both.

Sequins, embroidery and crystals are just some of the add-ons used on different fabrications to add newness to the fashion looks for fall. And color — brights and jewel tones — was also visible on many of fall’s offerings at the Moda show this past week. The show was held at the Jacob K. Javits Convention Center and Pier 94 in Manhattan, which also housed the Fame and Stitch@Coterie shows.

Even better, representatives at many of the brands that showed were also pleased with this year’s traffic patterns.

Patty Kim, owner and designer of the brand bearing her name, said on Tuesday, “This was excellent. There was good traffic. It’s the best show in nine years for me.”

Kim said she also showed new offerings this year via faux fur and ponte, which attracted the attention from buyers. Some of the new merchandise include mixed media items such as sweater knits with faux fur. She said the fabrications were from Italy, and that buyers were looking at the pastel shades, as well as jewel tones. The products had wholesale price points between $69 and $189.

Adrianna Russo, sales representative for Azi, pointed to a rack of embellished jeans as the hot-item buyers were eyeing. They wholesaled for between $49 and $79.

“All forms of embellishment on the novelty jeans are what consumers are looking for,” Russo said.

At Mitchie’s Matchings, a Canadian fur accessories firm, they too were adding embellishments to their line, adding a sparkly look to some items, such as knitted hats that also feature their signature fur pom-poms.

Janice Taylor, a Dallas sales rep for the company, said early Tuesday afternoon, “We’ve been slammed. [Buyers] haven’t stopped since 9 a.m. so far.” She pointed to the embellishment trend that began about a year ago when high-end design houses such as Gucci and Chloé began showing the look, and that it has now become more mainstream among the broader consumer market.

The broader consumer base tends to watch what is shown on the high-end luxury market, and then waits to see what resonates before electing whether or not to pick up on the trend. And once it gets accepted as a trend within the broader consumer base, it can last for several seasons, although manufacturers will find ways to tweak it to refresh the look.

At Fame, the show for the younger contemporary market that is sometimes referred to as the juniors market, traffic seemed good, but not great.

Brian Bae, sales manager for Hem & Thread, said traffic, while good, was slower than usual this time around compared with a show earlier in the year because buyers were more focused on in-season deliveries. Most had already made their big purchases, and those walking the Fame show floor were eyeballing everything for last-minute purchases to add to their stores, he said. Hem & Thread offered a wide range of categories, with wholesale price points averaging $13 to $22 and up. The company also showed a early preview of fall merchandise.

At the brand, Lucy Paris, sales representative Marcela Ortiz, said traffic was better on Monday. Most buyers who stopped by were looking for prints, pops of color, and matched top and bottom sets. Wholesale price points ranged from $28 to $78.

Also part of this year’s February showcase was Stitch, although it as since been renamed Stitch@Coterie. Stitch focuses on the accessible luxury market.

Firuze Hariri, owner of the Beluva Collection, was pleased with the traffic at the show. Her line targets the young female executive on the go. The product, mostly blouses fabricated in crinkled polyester, allows for hand washing and drip drying for travelers in their hotel rooms. The blouses are made in San Francisco, where the company also has two stores.

Mostly sold to specialty boutiques and on the company web site, Hariri said prints are a favorite of buyers and consumers. The blouses have an average wholesale price point of $60.

New to Stitch was Luigi Leatherwear, a Turkish company. Present was owner Musa Evin, as was Rose Sungur, the U.S. sales representative. According to the owner, the company has shown at MAGIC before, but was now at Stitch so it can build up its U.S. sales portfolio.

The leather firm featured wool and alpaca coats with fur trim, as well as shearlings and leather coats. Sungur said average price points translated to U.S. dollars from euros were between $200 to $700 wholesale.

Ciao Milano was another outerwear brand showing at Stitch. The collection included a wide range of outerwear from lightweight rain jackets to quilted jackets featuring embellishments along the zipper and heavier weight parkas for later in the fall season.