The designer has collaborated for the first time in his career.

“Hats are sort of the last frontier of accessories,” said Eric Javits, who has nonetheless built a successful and enduring brand based on that outlier of embellishments, and is celebrating his 35th year in business.

“I haven’t nearly approached maximizing what I can do,” Javits said in his showroom on 22nd Street, where shelves across the entire length of one wall display bestsellers, heritage designs, new releases and theatrical items such as a headpiece made from black feathers and rhinestone-encrusted eyes, created for his boyfriend, di Mondo, who has a penchant for flamboyance.

The Hampton hat is the number-one-selling style, a member of the Squishee family, and made from man-made fibers that resemble straw and provide UVA/UVB protection. Javits wanted to offer packable hats and developed the material as an alternative to natural fibers, which are stiff and break. “It’s the density of the weave,” he said, adding that the hats are evaluated by an independent lab, which tests their ultraviolet protection.

“A lot of retailers have pigeonholed me in terms of fabrications and what I can do,” Javits said. But rather than working within those parameters, Javits has broken out in his own quiet way.

He’s also learning new ways of working. Having eschewed the collaboration fever that’s swept through the fashion industry, Javits is partnering with Deveaux New York. The luxury brand, which is exploring the idea of the uniform for men and women, asked Javits to create a capsule collection of bucket hats and oversize berets for its men’s fall 2020 and women’s pre-fall 2020 lines. More Javits designs will be shown with Deveaux’s women’s fall collection in Paris. 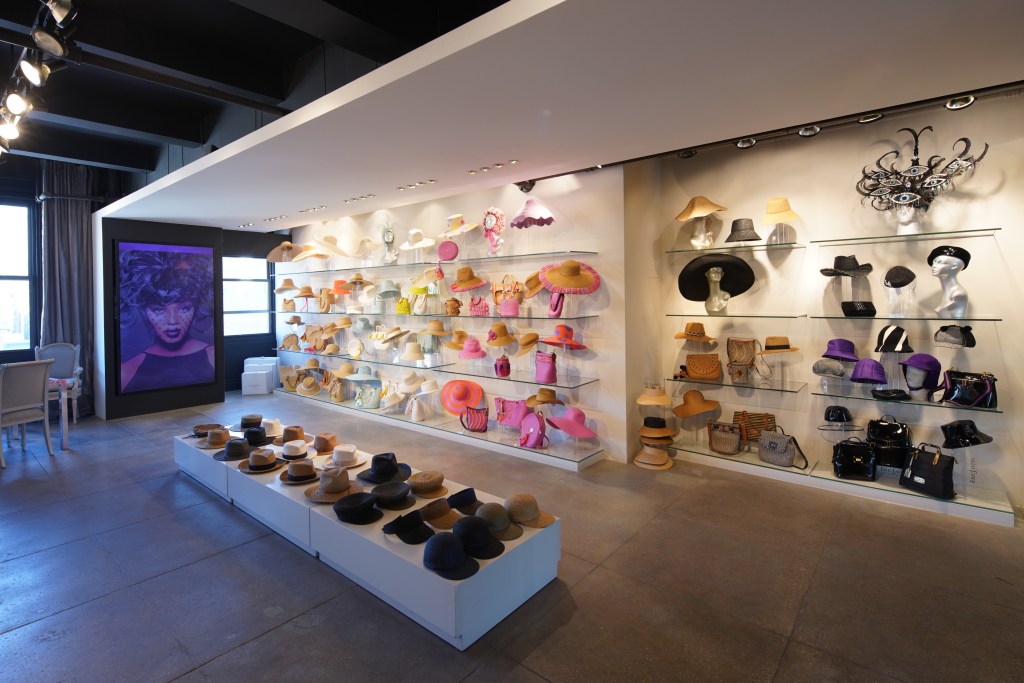 “There’s more growth internationally,” Javits said. “We’ll be doing more in Asia. We’ve let that stagnate. There’s also a lot of potential for men’s. We were selling to Barneys [New York] for a couple of years. Now we’re going to offer our men’s products to other retailers.”

Men’s berets in fabric, leather, suede and hair calf are priced from $325 to $490. J.Lo wears a black leather beret on the cover of Vanity Fair’s new Hollywood issue, posing road-warrior-style on a motorcycle, with Eddie Murphy and Renée Zellweger on another bike. Javits said J.Lo was spotted in the South of France last summer in one of his fedoras.

Javits, who created a sparrow topper with a bird and feathers for Emily Blunt and designed several 10-gallon hats for Beyoncé, invites stylists to troll his large achieve and borrow hats for photo shoots. When it comes to his collection, the designs are more grounded but no less creative.

“One of the most important aspects of my careers is my art background,” he said. “It’s given me a huge edge. I’m bringing artistry to the craft and the product. I don’t consider myself a milliner. I’m not trying to compete with Philip Treacy or Steven Jones. They’re phenomenal geniuses.”

“I’m not really focusing so much on trends,” Javits said. “I’m focusing on what women want and need.”

Javits designs 60 styles in any given season, including 30 to 36 handbags at his 25,000-square-foot studio and warehouse in Long Island City. Nordstrom featured a selection of his handbags at the opening of its women’s store in Manhattan. “There’s also drop-ship where they can see all of our styles and we ship the product directly to their customer.”

E-commerce accounts for 40 to 50 percent of the company’s sales. The site, which was in need of an update, was recently redesigned and is more mobile-friendly.

Former Sam Edelman executive Kaelyn Davis, who was recently hired by Javits as vice president, revamped the e-commerce site and is leading the company into new product categories while staying true to the ethos and mission of the brand.

“Eric asked me what natural extensions would be,” she said. “Skin protection or cover-ups are areas, and beauty is something Eric would like to get involved with. Beauty and health is becoming more important and we want to make sure our customer is being more protective of her skin. She knows the statistics.”

Forty percent of the hats will be made of recycled materials as part of the brand’s efforts to be more sustainable and environmentally conscious. “Everyone wants to feel like they’re saving the planet,” Davis said. “One of our constant conversations is about how to evolve our business to help save the world.”

Infusing the assortment with more fashion items is one of Davis’ goals. “We’re playing around with different price points,” she said. “There’s a lot of low hanging fruit with Eric Javits. How do we incorporate more of his artistry into the brand?”

Davis is lobbying for handbag styles to help capture a younger audience. “There’s so many cool handbags I see in the marketplace,” she said. “The brand has a loyal 50- to- 60-year-old customer. We have to incorporate more Millennials and Gen Xers and [Gen] Yers.”