Andrews’ collection will be sold at NFLshop.com and the Fanatics network of online stores, as well as stadium shops.

Erin Andrews, a sideline reporter for Fox NFL, is throwing herself into the fashion game.

The 41-year-old sportscaster, who’s also the host of “Dancing with the Stars,” has developed a women’s sportswear collection called Wear by Erin Andrews, featuring apparel representative of all 32 NFL teams.

Whether one’s a fan of the Philadelphia Eagles, Tennessee Titans, San Francisco 49ers, or any of the other NFL teams, Andrews has created specific clothing to wear both to game day and afterward out to dinner or to hang out at a bar. Each of the styles have the team name or logo, in some fashion, but it’s a more subtle interpretation.

“We want people to feel they can wear this outside the stadium, not just wear this to the stadium,” said Andrews. “Ours is so subtle. People love associating themselves with a team, that if they want to wear it outside of a game they can do it and not feel that it’s in their faces.”

“I’m obviously a huge sports fan ever since I was a young kid,” said Andrews, in an interview in New York last Tuesday. Andrews had just flown in that morning from Los Angeles, where she had hosted “Dancing with the Stars,” the previous night. Her weekly schedule is jam-packed, covering football games for Fox NFL on Thursday and Sunday nights and then returning to her hometown of L.A. for “Dancing with the Stars.”

As a first-born child, Andrews said her father got her interested in sports and she loved it. “I wanted to be with my dad and hear the stories of who was cool, who are the good players, who are the good organizations and who the enemies were,” she said. She grew up in New England, so her favorite teams growing up were the Boston Celtics and the Boston Red Sox. At that time, the New England Patriots weren’t doing that well so were never on TV, but the Green Bay Packers were, so her dad became a Packers fan. She later married an athlete, Jarret Stoll, a hockey player, who played for the Edmonton Oilers and Los Angeles Kings. He was also a two-time Stanley Cup champion, winning with Los Angeles in 2012 and 2014.

She recalled that when she’d go to the games, or go out afterward, she felt, “I can’t wear this T-shirt out to dinner.” She said there was a lot of fan merchandise out there, but nothing was appropriate or fashionable enough to go out in. She felt that there should be more options for women, especially since 46 percent of the football fan base is women.

So she approached Michael Rubin, executive chairman of Fanatics, and told him that her dream was to do a line. He liked the idea and they got to work on it. Andrews teamed with Dabah Fashion Group to manufacture a nine-piece collection.

“I’m not saying I’m a fashionista by any means, but I love a good T-shirt, I love a bomber jacket, I love a jean jacket, I love my hoodie. I’m just not crazy about having the logo in the center. I like it to be functional, but to wear it not just to go to a game, but I’d like to be able to wear it everywhere, anywhere.” She developed the logo for the brand, at an Italian restaurant after a couple of glasses of wine following Super Bowl 2016, which is Wear by Erin Andrews. The Wear has her initials in the middle. 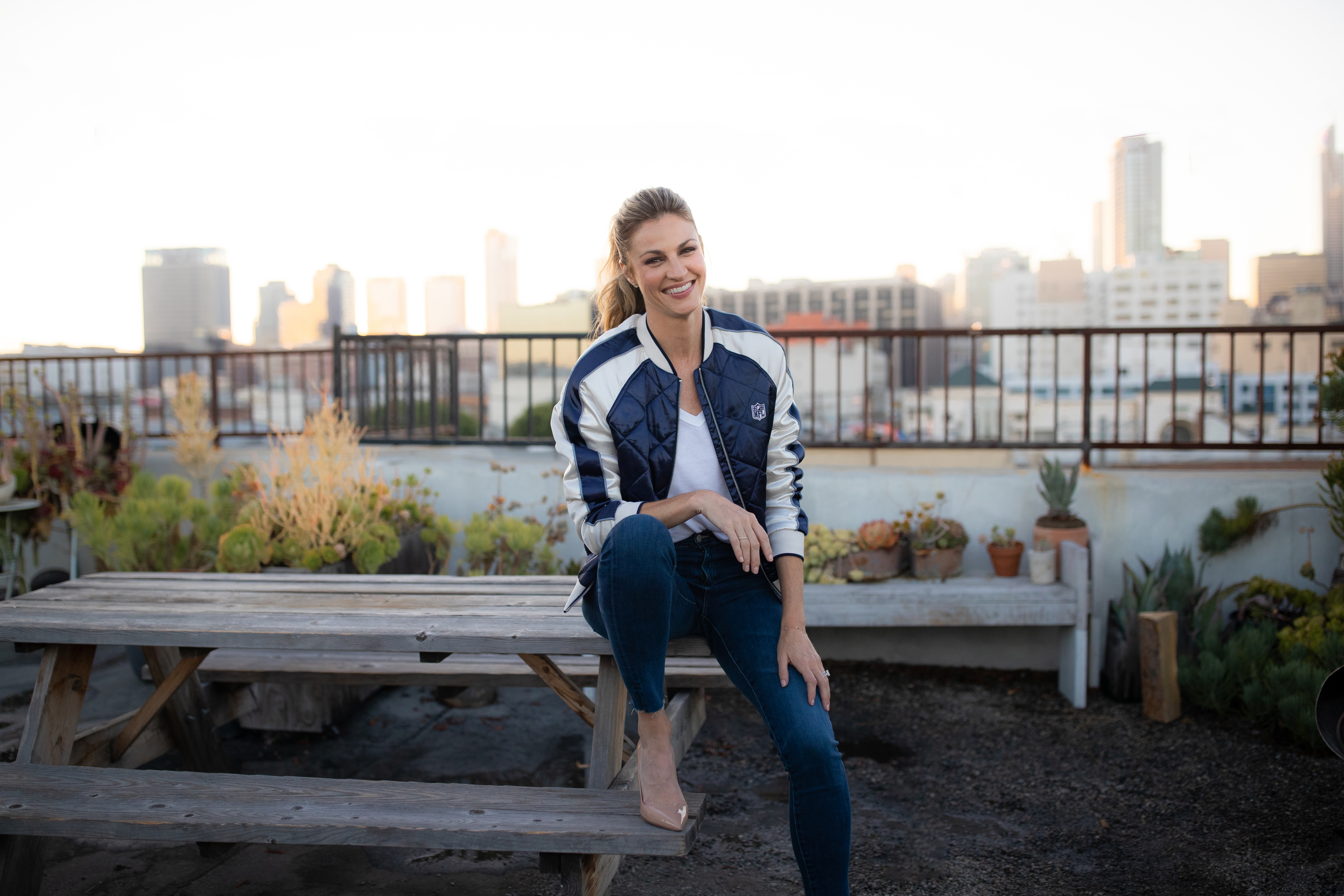 Andrews said Dabah got involved last spring. “They’ve been awesome. They got this very late to come out this season. We started  working on this in April, and we’re already working on fall for next year,” she said. She noted this will be an ongoing collaboration, and they’ll have new capsules introduced. She wasn’t at liberty to discuss them at this time.

Andrews said her desire was to create something that was functional, age-appropriate, size-inclusive and comfortable to wear. She’s targeting women of all ages, up from high school and college to women in their 50s or older. Sizes range from XS (0-2) to XXL (18).

She said the clothes are subtle. For example, the crew neck T-shirt has printed stripes and a raised rubber print logo. “You can put it with a blazer or a leather jacket,” she said. The hoodie sweatshirts, for example, have logo drawstrings and raised rubber print logo of the team’s name. The color-blocked quilted satin bomber jacket has printed lining featuring the team’s logo, tonal embroidery of the team logo and name on the front and the back. The denim shirt is in a light wash denim with distress printing and patches.

Asked what type of woman the collection is geared toward, Rhiannon Madden, vice president of NFL Consumer Products, said Wear is not geared toward a type of woman, but more of a style. “The NFL has a tremendous female fan base, these women all have their individual styles and ways in which they like to show their team pride. With that, we need to constantly innovate and find new ways to reach these fans. This line is for a fan who wants to show her team pride in a more subtle, trend right way.” 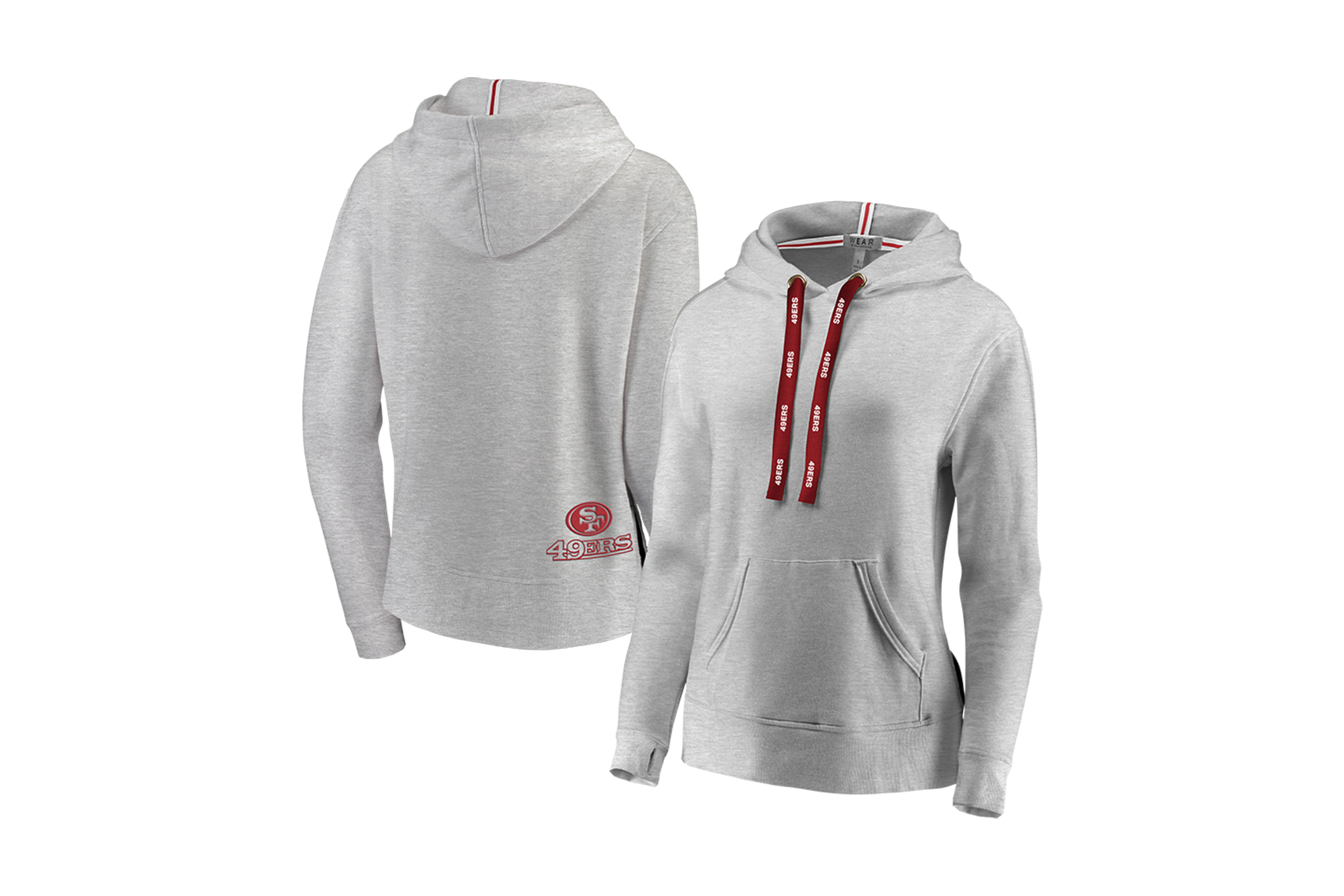 “We have fans who love showing off their fandom and are loud and proud, and we have others who prefer to show this in a more subtle and more intuitive way, similar to how they dress every day. We are always evaluating our offering to ensure we have something for all of our fans. The line is exceptionally versatile and gives you the opportunity to wear it for many occasions,” said Madden.

The marketing plan is for it to be promoted on social, e-mail, digital and fashion/lifestyle articles, said Madden. They also plan to use influencers and the NFL channels to spread the word.

Jack Boyle, global co-president. direct-to-consumer retail, of Fanatics, the largest retailer of licensed sports merchandise in the world, said that Andrews’ line differs from other women’s NFL merchandise on the site. “I think what distinguishes this is Erin’s take on what fashion is and how that can be interpreted for the female fan. Erin has had a unique opportunity to be around fans, and stadiums and players all over the country, and she’s used that experience to really understand what voids and opportunities are out there within NFL women’s apparel.”

He said women’s apparel is the fastest-growing segment at Fanatics today. Half the fans that visit the site are women. Since the start of the season, sales of women’s NFL licensed merchandise across the Fanatics network (including NFLShop.com) are up nearly 20 percent versus the same period a year ago.

“Erin identified fashion in some unique looks that she didn’t feel were being serviced in our industry today. We have a great group of licensees, but she felt there was a great sensibility in some of the fashion she could bring to our fans,” he said.

Boyle sees this as a long-term partnership with Andrews. “It will have the opportunity to reach other leagues as well. Her expertise goes beyond just the NFL. She’s very involved in other sports. She’s had a lot of experience in NCAA and MLB from a media perspective. Right now it’s just NFL, but we do see this as a long-term partnership and the opportunity to possibly expand into other leagues,” said Boyle.

Fanatics plans to promote the line through every channel. “Social will play a much bigger role than the rest of our business. We have incredible engagement with our female fans in social channels — in Facebook and Instagram. We will reach out to our large e-mail base, and also paid marketing and natural search. We’ll go to market in a very different way than our traditional men’s business or our jersey business,” he said. Boyle said their female fans “over-index in social engagement in commerce.”

Boyle said the collection will be sold on Fanatics.com, as well as NFLShop.com, 24 NFL e-commerce stores which Fanatics operates and several NFL stadium stores, beginning Thursday.

While he has ambitious expectations for the line, he decided to give a specific first-year sales projection. “We went after this very aggressively. It’s meant to be a real impact on fashion for the fan, as well as a strong financial act for us,” said Boyle.

When asked how they determine how much to buy for each team, he said, “We run the largest NFL business in the world. We have a lot of data that points us to the most important teams and how each of the teams is trending. We use data and analytics based on real-time demand in order to buy the right quantities for each of the teams.”

In Boyle’s opinion, the line has the opportunity to become much broader and have multiple deliveries within the season. “NFL is not just a four-month business. We’re in it 12 months a year. Being able to come back in spring, summer, fall and even a holiday collection, after we get this off the ground, will be a way to complete the collection. “We’re building a really strong foundation for the start of this partnership and the opportunities for this to expand to more deliveries and even more categories is definitely on the table.”

See Also: The Best and Worst Style From the NFL Draft

Andrews would welcome a world of Wear by Erin Andrews products and is especially interested in a pets and kids’ line.

As for how she likes to dress when doing her sportscasts all over the country, she said, “You’re looking at it.” She was dressed in jeans and a striped top with no team affiliation, just the NFL logo because she can’t be biased when reporting. “I log about three miles a game. I’m on my feet four to five hours, with no potty breaks. I have to wear comfortable shoes, and you have to be comfortable and ready for any climate. I was in Jacksonville last Thursday night, and it rained 10 times. You have to be prepared to be rained on and look presentable for 50 million people to watch you, and not wear the team colors you’re reporting on.”

Asked how she juggles her roles at “Dancing with the Stars” and Fox NFL, and now as a budding fashion designer?

“A lot of caffeine and a lot of help from my team, and lot of forgiveness from my husband,” she said.