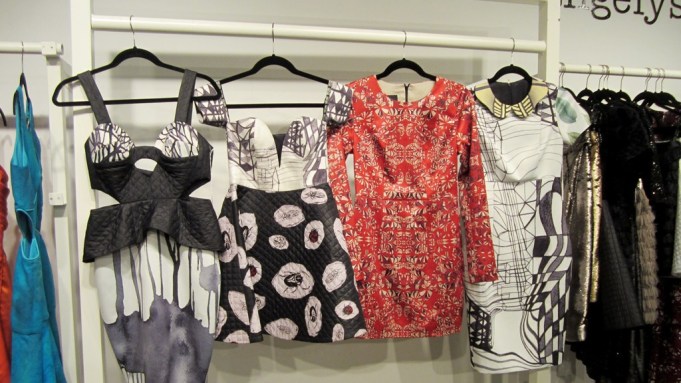 Leggings and dresses that mixed ponte and leather were popular, along with baseball-influenced jackets, nubby knit jackets, jumpsuits, silk tops and fabrics with surface interest, including mohair, lace, brocade, bouclé and sequins.

Jewelry designer Cheryl Dufault said, “Traffic was really, really slow, but I ended up having a great show — I could not believe it when I did my numbers. I talked to several other people who come often, and for those of us who have paid our dues we have a very loyal following. The buyers who came wrote big orders.”

Uprichard is known for dresses, but she introduced jackets and added more tops for fall.

“I think the business is going more toward separates,” she said.

The TV exposure has attracted 1,000 Facebook fans, thousands of hits on her Web site and a few new retail accounts, noted Perley, a Dallas native who’s based in Austin. On “Fashion Star,” her dresses have been picked up by Saks Fifth Avenue and Express.

At FIG, Perley said, “The buyers are always looking for something that stands out because the market is so saturated. They like it when the designer is actually here.”

“For an emerging designer, we were pleased to get the collection in front of some important accounts like Tootsies and Stanley Korshak, to name a few,” said Hadjiyanis, senior account executive. “It will all be in the follow up.”

Michele Percy, owner of N.K. Boutique in Baton Rouge, La., hiked her fall budget by about 20 percent since she’s opening a second unit in late April and is selling online.

“Last year was amazing and this year is ahead of last year, so it’s been really good,” she said. “I’m buying a lot of leather — A.L.C. has great leather skirts — and leggings with ponte and leather, skinny jeans, a lot of tops, and a lot of black and olive. My customers always want the trends and love dresses.”

Emma Greathouse, FIG director, said, “Attendance was steady and in line with our 2012 attendance for March. With that said, many exhibitors reported an increase in sales as compared to last March…We will continue working to bring the most relevant contemporary collections to FIG.”