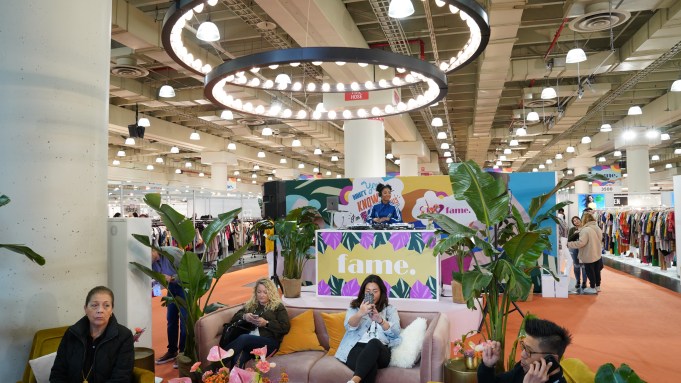 Manufacturers might still be anxious about what effect Trump’s tariffs could have on their bottom line, but fashionistas and retailers are on the hunt for next season’s biggest trends. Like wicker handbags, crochet cover-ups, bright colors and denim, all of which were on display at this year’s spring 2019 New York Women’s January marketplace.

The annual event, a collection of five trade shows, ran Sunday to Wednesday at the Jacob K. Javits Center in Manhattan. Manufacturers and fashion brands showed off their spring and summer lines, while retailers combed the racks for ready-to-wear apparel and accessories.

Both Fame, a selection of contemporary and streetwear brands, and Moda, which featured slightly upscale apparel, had more than 100 vendors displaying products at each show. Retailers also showed up in increased numbers. Overall attendee registrations for all five trade shows under the UBM Fashion umbrella was up 10 percent through Monday.

“Attendance at the show this season has been really positive,” said Danielle Licata, president of East Coast women’s Informa, which acquired UBM Fashion. Licata pointed out that retailers were waiting in line to get in Sunday morning before the event opened.

Perhaps the most recognizable designer at the two shows was Nicky Hilton, who was in New York to unveil her collection Nicky Hilton x Tolani Passport Collection, a recent collaboration with designer Alka Tolani. The socialite said the apparel line was inspired by the places she’s traveled internationally over the last two summers.

She couldn’t remember exactly just how many stamps she’s added to her passport of late, but said she did have a favorite destination.

“I love Italy,” Hilton said, holding up a few favorite pieces, such as brightly colored tunics and bohemian-style one-pieces fit for an Italian winery. “And I love Italian food. I love pasta.”

Denim was featured at multiple booths throughout the venue as well, from cutoffs to rhinestone-studded jeans, an extension of last year’s denim craze.

“People talk about the denim trend going away, but it’s never going away,” said Pam Benassi, co-owner of the Northbrook, Ill., clothing store Duo. Benassi and her business partner flew in from Chicago to attend the shows.

“We sell jeans every day,” Benassi said. “Everyone needs a good pair of denim for Saturday night. You can’t wear Lulu out.”

Andrea Rosenberg, owner of New York’s HipChik, said her blazers with inspirational quotes along the back, like “Break the Rules” and “Own It,” have been a hit. Rosenberg said women wear her blazers for all of life’s many events, including dates and job interviews.

She is steadfast that she wasn’t influenced by Melania Trump’s appearance in a Zara jacket last summer that read, “I really don’t care,” along the back. The First Lady donned the $39 coat on a trip to see migrant children at the Texas-Mexico border.

“I did the opposite of her. I’m very positive,” the designer said. “I don’t watch the news. I live in a bubble.”

But that’s not been true of everyone. Vendors throughout Fame and Moda were on edge over the still-uncertain tariff situation.

In November, President Trump said he would implement another round of tariffs on $267 billion worth of select Chinese imports. The levies, which includes additional duties on handbags, would increase to 25 percent, up from 10 percent.

Then last month, the Trump administration seemed to come to an agreement with Beijing — at least temporarily — agreeing to hold off on tariffs for 90 days while the countries continued negotiations. Still, Trump has warned that if negotiations don’t go well, then the tariffs will begin in March. As the tensions play out, apparel and accessory brand manufacturers are left wondering who will shoulder additional costs.

Hilton didn’t want to comment on the situation. But other vendors said they’re worried.

“Until now in the business, the tariffs have been pretty much the same,” Kim said of his 10-year-old company. “We’ve been able to factor them. Now it’s up in the air.”

James Garvey, director of sales at Do+Be, a contemporary women’s apparel brand, pointed out that even if tariffs don’t make their way into the textile business, they’ll still likely impact individual fashion labels at some point.

“You can’t separate out tariffs,” Garvey said. “If there are tariffs on steel, inevitably it will impact prices in other industries. It’s just a matter of time.”

He was just one of many vendors that said he doesn’t think retailers and consumers will be willing to pay higher prices if tariffs go into effect.

But Scott Lester, a sales representative for the hat company Dorfman Pacific, said consumers will continue to pay.

“Our hats sell,” he said of the hat collections, which include Kentucky Derby hats, fedoras and Meghan Markle-inspired fascinators. “Maybe they just won’t sell as many as before.”

He admitted a 25 percent tariff would be too much for the hat company to absorb, even if the company raised its prices.

Some brands have started moving production out of China. One such company is apparel and accessories brand Muche & Muchette. Muriel Zerdoun, one of the designers and founders of the Miami-based company, said in the last three months Muche & Muchette has moved about 50 percent of its business out of China to places like Indonesia and India. Los Angeles-based apparel brands Chaser and Saltwater will also likely employ the same method if push comes to shove, said Hadi Salem, owner and founder of the brands.

“In the end you just have to adapt,” Salem said. “The reality is that manufacturers can’t raise their prices because retailers won’t pay more. There are other countries that don’t have tariffs.”