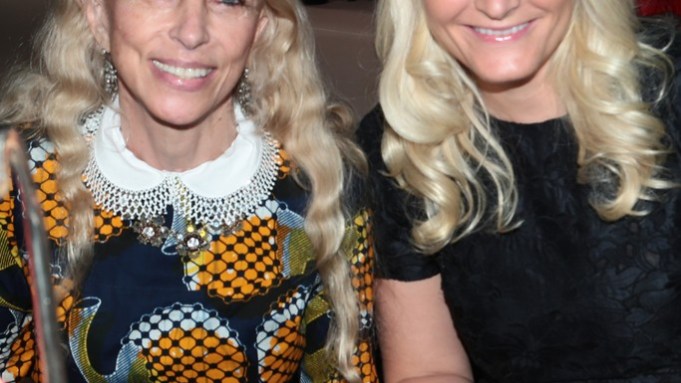 Hosted by F4D’s founder Evie Evangelou and emceed by CBS’ Margaret Brennan, the crowd at The Pierre heard from such honorees as Livia Firth, Franca Sozzani, Tina Brown, Michel Sidibé and The Rose of Sharon Foundation founder Folorunsho Alakija. Upping the fashion quota in the ballroom were Donna Karan (who buzzed by before guests were seated), Katie Lee, Reem Acra, Zang Toi and Elettra Wiedemann. There were also such notables as First Lady of the United Nations Madame Ban Soon-Taek, Crown Princess Mette-Marit of Norway, Her Royal Highness Princess Ameerah Al Taweel and Her Royal Highness Princess Bassma al Saud.

Dedicating her award to the 1,129 factory workers killed in this year’s Rana Plaza fire in Bangladesh, Firth said, “Fashion encompasses all kinds of industries from agriculture to communications, so the impact that we have every day is huge,” she said. “We must realize the connection that the people at the bottom of the supply chain who make our clothes have to our lives.”

In his remarks, microcredit pioneer and Nobel Peace Prize winner Muhammad Yunus also referenced the catastrophe, noting that most of the victims were women and that the apparel industry is built on the backs of poor women. The average factory worker in Bangladesh earns 11 cents an hour, versus Vietnam’s hourly rate of 23 cents, India’s 28 cents an hour and Cambodia’s 32 cents an hour.

Sozzani said, “What’s happening in Bangladesh could happen in any country because people think they can get clothes for nothing — for a lower price. We really have to face reality.”

Afterward, Sozzani discussed how designers might get more involved. “What they need, from my point of view, is not giving them production but to become mentors. If we only give them production — which is good, it’s better than nothing — but what we really need to happen is to help them build up the whole town. At that point, they become more powerful; they can give work to other people, and they really have a story. Giving them production, this year they have it, the next year they don’t.”

After being approached by the Italian company Pinko, she helped them line up production for 35,000 bags in Ethiopia, and now they are expanding on that, which has resulted in more than 150 women getting jobs. “It’s a drop in the bucket, but it is better than nothing,” Sozzani said.