Most recently, she was vice president of sales at DKNY Sport and Donna Karan Active at G-III Apparel Group.

Katja Shrouder has been tapped as chief operating officer of Westport, Conn.-based Kerri Rosenthal, a home and apparel lifestyle brand. It is a new post.

Launched in 2016, Rosenthal’s designs are inspired by and derived from her original artwork. Kerri Rosenthal is an award-winning interior designer, artist and stylist.

Most recently, Shrouder was with G-III Apparel Group and led the launch of the ath-leisure divisions DKNY Sport and Donna Karan Active. As vice president of sales, she oversaw and managed domestic and international sales. Earlier she was a consultant to New York-based luxury brands Hollie Atman and the Amerex Group division Red Carter and the Newport  Beach-based Raj Manufacturing. She has also been director of sales for Elie Tahari.

In her new role, Shrouder will oversee Rosenthal’s staff, including strategy and revenue development across trade, wholesale, e-commerce and retail outlets and platforms. She will also be charged with the development of new categories and market expansion opportunities. The company has a freestanding store in Westport, and sells such stores as Anthropologie, Society Telluride and Palmer & Purchase, along with specialty stores and beach resorts across the U.S.

Shrouder, who lives in Greenwich, Conn., said she heard about the opportunity, and although she was enjoying her role at G-III, she said, “When I read this, something about it just struck me and I began to research her and I became kind of obsessed.

“Once I decided to explore the opportunity and I had the chance to speak with Kerri, I [recently] told her, ‘basically she had me at hello.’ She is the most talented, kindest, marketing genius I have ever met in my entire career, and I could not pass up the opportunity to work with her,” said Shrouder.

Rosenthal, chief executive officer, said, “Katja is one of the most capable, resourceful and creative executives in lifestyle design, fashion and apparel and her deep experience across all aspects of global brand sales and marketing makes her the ideal leader to help us manage our rapid growth and take us to new levels. We’re excited about the opportunities and possibilities ahead as our business expands alongside the explosion in suburban living.” 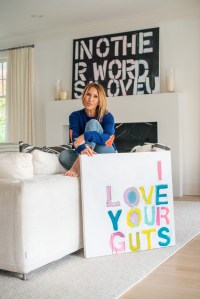 With so many people leaving New York City and moving to the suburbs, Rosenthal is seeing a tremendous uptick in home furnishings sales since COVID-19 began. Rosenthal enjoyed its best sales month ever this past August and by Labor Day, the company had already achieved its record full-year 2019 revenue benchmark. 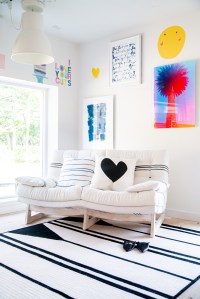 In addition to her home accessories, fabrics, original artwork and furniture collection (which is made locally), Rosenthal designs clothing which includes cashmere sweaters, hand-painted clothing, sweatshirts, Ts, totes and hats. 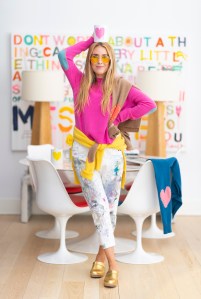 A look at the Kerri Rosenthal apparel.  Kyle P Norton

Shrouder said Rosenthal has done very little marketing to raise her brand profile. “She has 50,000 followers on Instagram. What I’ve seen [since starting in August] is bigger than I could ever imagine, what the opportunity can be,” she said.

Shrouder said the company is looking to expand into new categories such as tabletop and bedding, and is talking to a licensing company to achieve that.

“What’s really exciting is in addition to her home business, the apparel collection using my expertise is going to explode,” said Shrouder. The assortment had been limited because Rosenthal was doing it all herself. For summer 2021, the company will expand its cashmeres, graphic Ts and sweatshirts, totes and hats to wovens, skirts and sarongs. For fall 2021, the offering will get even bigger, she said.