The company is working with its retailers and shifting and dedicating additional resources to drive their online sales.

G-III Apparel Group held a virtual annual meeting on Thursday to update shareholders on its performance and on how it will be reopening its corporate offices on Monday in a responsible manner, with the health of employees and customers as top priorities.

“We are following CDC guidelines to ensure we provide a safe, socially distant workplace with ample PPE available for our associates,” said Morris Goldfarb, chairman and chief executive officer of G-III.

Goldfarb began the 40-minute meeting by addressing recent events surrounding the killing of George Floyd by Minneapolis police and the protests throughout the country. “We at G-III maintain a zero-tolerance position against racism, inequality and injustice of any kind,” he said. “We strongly believe that we all need to do our part to make a difference, both internally in our company and externally in our communities. We’ve committed out support to UNCF [United Negro College Fund] and other organizations in an effort to help eradicate social and racial injustice.”

As the coronavirus pandemic sent shockwaves throughout the world, Goldfarb said the group felt it imperative to assist the community at large. G-III made contributions as well as leveraged its supply chain to donate PPE to medical facilities, first responders, and police departments.

Goldfarb said the company had to make difficult decisions, such as significant reductions in pay for senior management and most other employees, and furloughing a large portion of its employees. “We’ve also adjusted inventory receipts in response to store closures and have been replanning the balance of the year,” he said.

Turning to how the second half is unfolding, he said, “Our strong collaborative vendor base will afford us the ability to make opportunistic purchases for the back half of this year. These actions, combined with our solid balance sheet and liquidity position, strengthen our financial flexibility. We’re well positioned to weather the current challenges and to demonstrate our leadership position in the fashion industry as we emerge from the crisis.”

As reported, last week G-III said it would permanently close all 110 Wilsons Leather and 89 G.H. Bass stores, which will enable the firm to greatly reduce its retail losses. The company has hired Hilco Global to assist in the liquidation of those stores. After completion of the restructuring, G-III’s retail operations segment will consist of 41 DKNY stores and 13 Karl Lagerfeld Paris units. Its e-commerce sites are DKNY, Donna Karan, Karl Lagerfeld Paris, Andrew Marc, Wilson’s Leather and G.H. Bass.

According to Goldfarb, G-III’s wholesale business is anchored by five “power brands” consisting of DKNY, Donna Karan, Calvin Klein, Tommy Hilfiger and Karl Lagerfeld, which continue to be the primary sales and profit engines for G-III. “We ended fiscal 2020 with a sizable and growing wholesale business of $2.86 billion in sales and entered the first quarter of fiscal 2021 with good momentum in our wholesale business, validating our strategy and the strength of our product offer,” the ceo said.

He noted that the Calvin Klein business, which is the company’s largest, approached $1.1 billion in annual net sales in fiscal 2020. Calling it a “dominant resource in the women’s apparel market,” he said one of the highlights was the launch of the new CK jeans denim collection for the fall and holiday season.

The Tommy Hilfiger business ended the fiscal year with net sales of nearly $500 million, an increase of 25 percent from the prior year. While growth came across all categories, a successful initiative was the introduction of a separate Tommy Jeans line. “As we broaden our product offering and distribution, we remain confident that we can meaningfully grow and expand our Tommy Hilfiger business over the next several years,” said Goldfarb.

The Karl Lagerfeld wholesale business ended the fiscal year with net sales of just over $110 million. The company looks to expand product distribution once the consumer environment normalizes, said Goldfarb.

The ceo said the company’s own DKNY and Donna Karan brands registered another solid year with net sales growth of nearly 25 percent. The businesses account for over $450 million in annual wholesale sales and licensing revenue and are a significant profit contributor to G-III, he noted. The group also looks to significantly increase overseas opportunities, especially for the DKNY brand. 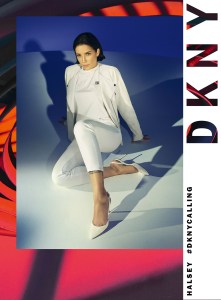 Its status swimwear label Vilebrequin continues to perform well, he said, noting that they continue to expand the brand’s footprint globally via e-commerce and store openings.

Goldfarb said the company’s warehouses remained operational during the pandemic with a reduced workforce, fulfilling orders for online customers and shipping products to retail partners. “We’ve begun to scale these operations as stores have reopened throughout the country. We have reacted decisively to reduce our inventory exposure. We’re being conservative with respect to ordering future inventory, and we’ll continue to work closely with our retail partners in planning out the rest of the year,” said Goldfarb.

The ceo said he anticipates further closures in brick-and-mortar retail, “but we believe we are well positioned to ultimately retain and increase our business, whether through the brick-and-mortar stores of our retail partners or though their online site. It’s important to remember that we do a significant amount of business through our partners’ online sites as well as through our own site,” he said.

In some categories, he said, online penetration can account for over 40 percent of total product sales. “We will be actively working with our retailers and shifting and dedicating additional resources to further drive sales on their online sites,” he said.

In addition, he said the company is making substantial investments in its own online business, and has seen significant comp sales increases in the DKNY and Karl Lagerfeld online sites.

Neal S. Nackman, chief financial officer and treasurer, told the meeting that as a result of the company’s closing of G.H. Bass and Wilsons Leather stores, it will incur an aggregate charge of about $100 million from this fiscal year, primarily related to landlord termination fees, severance costs, store liquidation and closing costs, write-offs related to right-of-use assets and legal and professional fees. He expects the cash portion of the charge to be about $65 million.

While the fiscal year started off with good momentum, by mid-March, G-III was significantly impacted by the virus outbreak, with the majority of its retail partner stores, along with its own outlet doors, closed under statewide shutdown orders. Net sales for the first quarter ended April 30 declined 36 percent to $405 million. Net loss for the first quarter was $39 million, compared to net income of $12 million in the year-ago period.

SG&A expenses were $155 million in the first quarter compared to $202 million in the year-ago period. “We took a hard look at our SG&A. We had to make some difficult decisions in order to preserve capital,” said Nachman. “We significantly reduced payroll by furloughing approximately 60 percent of our wholesale team and 80 percent of our retail teams as well as implementing significant salary reductions for management and other employees.” He said that the company is bringing its workforce back “in a thoughtful manner as stores open and we ramp up our wholesale operations.”

G-III also reduced its marketing and capital expenditures. “Furthermore, we continue to have conversations with our licensor partners to see contractual relief. Our efforts have enabled us to reduce our monthly cash expense burn to approximately $35 million,” said Nachman.

In other business, the company re-elected its 11 directors and ratified the appointment of Ernst & Young LLP as the company’s independent auditors. It also approved the nonbinding advisory resolution on the compensation of the company’s named executive officers.