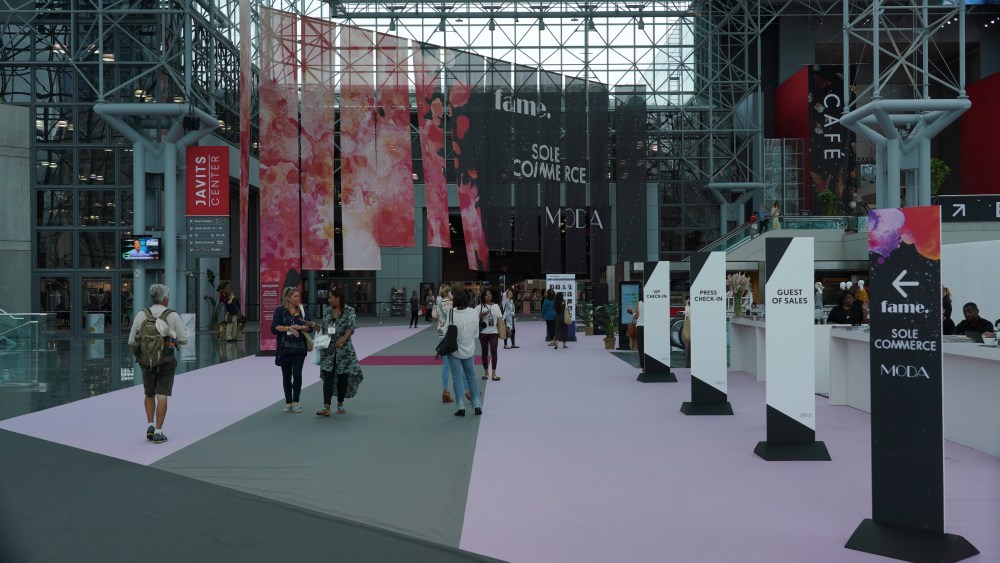 Many vendors at the Moda and Fame shows held Saturday through Monday at the Jacob K. Javits Convention Center here said traffic was better as the weekend progressed. While solids and core basics attracted buyers looking for immediate fill-ins to round out their fall offerings, many more were browsing and putting in orders for spring deliveries or for early November for the resort category.

Vendors at Moda in particular cited increased traffic from buyers looking for newness from the resort lines.

Neal Kronovet, of the Chicago-based Pure Amici line, said Monday, “Traffic has been fantastic. Sunday was the better day, but today is still early.” His line wholesales for between $39 for tops and $188 for cashmere knits. He was showing mostly resort, although there were some fall offerings as well.

“Our customer just loves color,” he said, when asked about the selection of boldly hued apparel, particularly a group of bright yellow cashmere sweaters. While Kronovet acknowledged that certain shades of yellow can be hard to wear, he noted that doesn’t seem to bother his customers.

“They gravitate toward color. They will wear it if the color gives a certain energy and vitality,” he explained, noting that the yellow now tagged as Gen Z or Millennial yellow had an increase in sales about six months ago. Other bright hues for the brand’s resort collection included fuchsia, turquoise and white.

Colorful prints and patterns were the hallmark of a dress line called Jean-Pierre Klifa. Sales representative Catherine Yankopoulos said traffic was good over the three days. The line has been attracting resort buyers and boutiques from the Caribbean, such as St. Martin and Antigua, and part of Florida, she said.

The brand’s namesake owner, Jean-Pierre Klifa, said he got the idea for the line after owning some retail stores and learning that customers were gravitating toward prints. Klifa was also showing his popular bucket bag that he designed and sold under the JPK brand of handbags, which he sold in 2012.

“I ended up opening retail stores [after the sale] because I was bored,” he said, explaining that the shift to dresses was due to a non-compete provision following the sale of his handbag company.

Liz Lighton of Dizzy-Lizzie was showing mostly tops and some dresses for resort, the beginning of spring and her collection of fall’s bestsellers. Known for its prints, the cotton and cotton-linen blended options wholesale between $44 and $52, with dresses starting at $55. Many patterns included touches of yellow, whether as part of a geometric design or a daisy motif on a black and white background.

“My customers want anything that is whimsical, fun and colorful,” she said, noting that stripes have been popular so far. She said she has also “sold a ton of gold for fall,” adding that another popular color has been green, with both joining the perennial color favorite, which is blue.

Lighton said, “Traffic, considering Hurricane Florence in the area where many of my customers are located, has been amazing. I will reach last year’s figures even without my buyers from North Carolina.”

Over at Fame, Nick Yeum of Hayden Los Angeles said traffic began picking up Saturday afternoon. Wholesale price points for the younger contemporary offerings range from $13.75 to $18.75. He said his customers were looking for immediate deliveries, as well as for fall and winter shipments. Many buyers focused on immediates were looking at everything to see what caught their eye — or what they thought they needed in the stores — while others were gravitating toward sweaters for later deliveries. Yeum said leopard prints were popular among buyers.

At Current Air Clothing, jumpsuit options in prints, or printed two-piece top and pant sets received attention from buyers. The jumpsuits wholesale for $30, while dresses that received interest were mostly in solid colors.

Justin Yoon, sales representative at Custom Air, said traffic was OK, but seemed “a little weaker” compared to the show a year ago.

John Lee, sales representative at DO+Be, said, “Traffic today was the busiest [of the three days].” He said traffic on Saturday and Sunday “was not good,” attributing that to the shift in the show dates. This year’s show began Saturday and ended Monday, while past shows typically start on Sunday and end on Tuesday. The latter schedule, if the show had been held this year along a similar calendar schedule, would have been close to Yom Kippur, which begins at sundown Tuesday night. 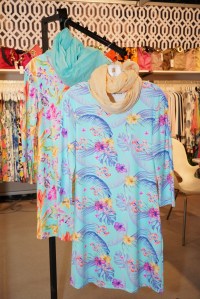