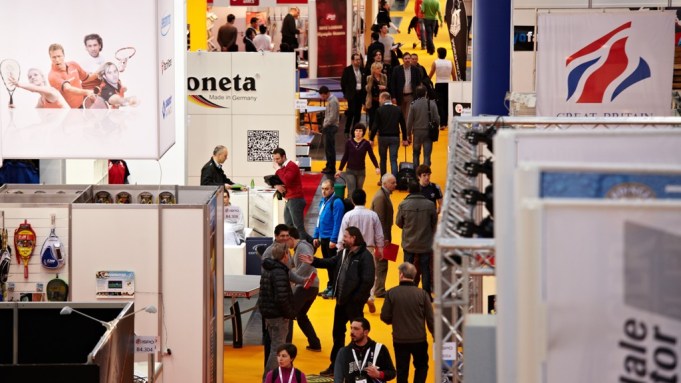 BERLIN — The German trade fair scene is going to be as packed as ever in 2013, but buyers and participants may need to get their bearings as organizers introduce new events, fresh setups and new venues.

While the hub of the activity is in Berlin, where more than a dozen fairs and trade platforms will be staged between Jan. 15 and 18, fairs such as Ispo and Munich Fabric Start, as well as assorted ready-to-wear events in Munich and Düsseldorf remain firmly established on the German trade show calendar.

Signs point to a favorable season start. Europe’s largest single market is still on solid economic ground, German consumer sentiment has remained positive and the nation’s apparel retailers are expected to close 2012 somewhat ahead of or on par with 2011. Yet shifting market conditions, consolidation on both the retail and manufacturer level and euro zone worries are coloring the industry climate here for the year ahead.

Karl-Heinz Müller, founder and chief executive officer of Bread & Butter, was one of the first to reshuffle the decks. To reactivate the “selected” aspect of this “trade show for selected brands,” he scaled back the show’s 600-brand portfolio by some 100 to 120 exhibitors. Müller still won’t name names of the “uninvited” and the most recent exhibitor list has some glaring omissions.

“The list is updated daily, and names only go on that list when the contract has been signed and the space is definitively set,” Müller explained. “People like Jason Denham will of course be there, but it’s not clear whether in L.O.C.K. or the main hall. The same goes for Tommy Hilfiger. They’re planning something spectacular, but it’s not clear exactly where [in the halls].”

One thing is clear, however. The main hall, which was cleaned out the most, will no longer be called Denim Base, “which it never really was,” Müller stressed. Instead, he sees it as a “real urbanwear concept, with jeans, sportswear, sneakers and a bit of fashion. We have to mix the content and the brands. Not this mono-culture.”

B&B’s other areas, including L.O.C.K., Fire Station, Superior Men/Women and Sport & Street, will largely remain intact, though some brands may move into the main hall. And Style Society and Fashion Now are merging, with a stronger, young women’s fashion focus. Is this programmed disorientation for show veterans?

“There’s nothing worse than boredom,” he countered. “It’s important that people discover things. I think a woman’s boutique, for example, should look at Sport & Street, see the different cultures.”

Premium is gearing up for its 10th anniversary this season. To help mark the occasion, chosen exhibitors are offering limited-edition items that can only be purchased at the show. Also in the works: a 43,000-square-foot Atelier space representing the “essence” of Premium, housing brands like “Mykita, HTC, LaLa Berlin…who do their own thing and successfully exist in the jungle of trends,” noted Premium cofounder Anita Tillmann.

Premium consistently changes about 25 percent of the brands showing each season “to inspire the buyers and help them find something new.” She sees a rise in so-called avant-garde collections of the Rick Owens ilk, with a growing number of designers from Japan and South Korea opting for Premium and Berlin.

“There are young companies, young people looking for a new spot where they can move and make it,” Tillmann said. “[They want to] connect with new people and also go out, so Berlin is a big attraction. They’re even looking for showrooms here. It’s a movement.”

New to the Berlin scene is Panorama, a trade fair for more midrange and broader distribution brands originally scheduled to debut at Berlin’s new airport last July. The airport is still in construction, but Panorama is nonetheless taking off this January with about 350 exhibitors in the 215,000-square-foot Airport ExpoCenter. Panorama ceo Jörg Wichmann sees the fair’s portfolio of moderate and casual brands like American Retro, Bandolera, Betty Barclay, Comma, Marc Cain, Pierre Cardin and S. Oliver as a supplement to the city’s more street, niche and designer offerings.

“It’s an international mix and there are many companies who’ve never shown in Berlin or Germany,” he said. “And they’ll attract a completely new group of buyers to Berlin.”

When the airport is in service, Panorama should be a natural first stop, as visitors will be landing there. But to make sure they head in that direction now, Panorama is organizing a 150-car fleet, transfer service, luggage delivery, after-breakfast shuttles and more.

Service is also a prime consideration at Bright, the trade show for skateboard and sneaker fashion that’s moving to the more central Alte Münze, or Old Mint. Bright’s exhibitor roster is stable at about 300, but business “is relatively difficult for us all,” said cofounder Thomas Martini. Though Bright’s segment is profiting from the latest sneaker boom, there have been major manufacturer and retail closures. Just last month, Burton said it was phasing out some of its apparel lines, Martini noted.

“What’s happening is a stricter selection process,” he said. “So we’ve set up a retail care program, where exhibitors can send us their 20 top retailers and we’ll help with hotel bookings, shuttles and special VIP services. We’re trying to get the most important retailers to Berlin, even if business isn’t so good.”

The contemporary shows Capsule and Show & Order, and The Gallery Berlin are all confidently moving ahead.

“Capsule is blooming in Berlin. We are continuing to grow and strengthen our presence,” said cofounder Edina Sultanik. “The retailers who come to our show are looking for either commercial-mainstream product, similar to our Vegas show, or the really avant-garde collections, so we are able to present a wide range of product.”

Capsule also features young Berlin and German designers and brands in its mix.

“We’ve had queries from Spain, Scandinavia and Italy, so slowly, people are getting to know about us,” said show founder Verena Malta, noting the focus is high-fashion, sophisticated, casual collections  not necessarily from designer brands.

The Gallery Berlin is also looking to get bigger in Berlin, said Mirjam Dietz, international brand development and communications director for the Igedo Co., but space limitations means the next edition in Café Moscow will continue to feature about 150 brands. She said the portfolio would be “more mixed. Like the market, which is changing.” She added the fair business is also changing.

“You’re seeing so-called boutique fairs here, rather than big stands and big spending,” Dietz said. “More companies here are likely to spend that budget on marketing to the final consumer or their own retail.”

Igedo, which formerly organized the mega CPD fair in Düsseldorf, also puts on The Gallery Düsseldorf with 200 participants. In Moscow, however, big is still the rule, with Igedo’s 600,000 square-foot CPM Moscow trade fair.

The green fashion sector will continue to be served in Berlin by Green Showroom and Ethical Fashion, both organized by Messe Frankfurt. The sustainable fashion show platform Showfloor Berlin, which had partnered with Lavera cosmetics, is reorganizing itself independently for January.