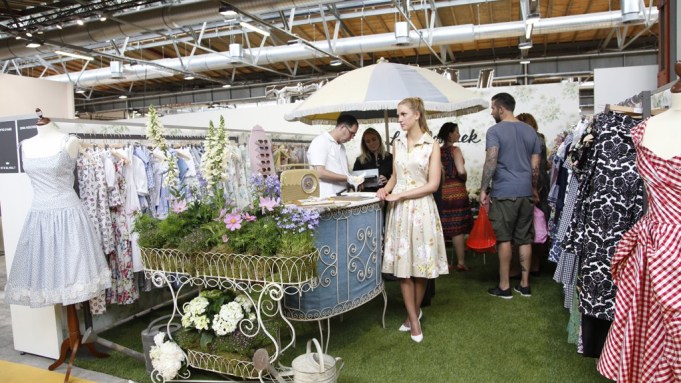 At the same time, shifts in distribution strategy towards company-owned stores are keeping a growing number of major domestic and international brands off the Berlin trade show and fashion show circuit.

The absence of German stalwarts such as Hugo Boss and Escada at MBFWB or giants like Levi’s or Tommy Hilfiger at Bread & Butter initially raised a hue and cry. By the end of last fashion week, however, the consensus was that Berlin’s main strength is as a marketplace for new, smaller and more specialized labels. Siegfried Jacobs, deputy director of the German Apparel Retailers Association, said that is precisely what the nation’s retailers need to be tapping into.

“It wasn’t an easy year,” he said, with most stores just hoping to break even in 2013 after a soft first half and unseasonably warm weather this fall. In addition, faced with growing online competition and weakening in-store traffic, he said “retailers are particularly challenged to find new labels to refresh assortments and break the monotony.…And in the search for new labels, one usually makes a find in Berlin, especially at Premium and Bread & Butter.”

Berlin’s boisterous urbanwear trade show, Bread & Butter has been keeping a fairly low profile lately, and managing director Karl-Heinz Müller said no major changes are in the works for January.

“We’re in strange times at the moment,” Müller said. “A lot of the bigger brands are verticalizing, opening their own stores and focusing on emerging markets, which calls their fair participation into question. Sure, it’s a loss, and I have to get used to not having the big boys around, but I also think we can have more fun. The giants used to rule, but not anymore.”

He said “about 600 brands that are interesting and more individualized” will be showing at the former Tempelhof Airport. The participation of the Bestseller group, which took over the complete Hangar One in July, was a one-season deal, “so we’ll be a bit smaller. But that’s the way it is.”

Müller said he’s not thrilled with some of the more commercial developments in the Berlin trade show scene, “but I say ‘Ich bin ein Berliner’” (“I am a Berliner”) as, indeed, does Bread & Butter’s next marketing campaign. “We’re looking forward to a super event.”

Anita Tillmann, cofounder and director of Premium, said next season would be “all about the details…to lift the quality of the time people spend at Premium.” The contemporary showplace, she added, is fully booked.

The way people enter the fair will be changed, the much-debated Ikea-style pathways limiting one’s navigation of the halls are a thing of the past, a new caterer and new eating areas will be on offer, plus Premium is working on what Tillmann described as “a sort of “match-making software.” After buyers fill out a questionnaire, they will receive a detailed plan directing them to exhibitors that could meet their needs. “For example, if someone says they’re primarily interested in accessories, we’ll guide them through accessories first so they don’t lose time,” she explained.

Also new next season: the Dissonance area featuring avant-garde labels like Hannes Roether, Demoo Parkchoonmoo or Trippen will be moving to new 3,750-square-foot digs in the former F95 store right next to the main entrance. Adjoining Dissonance will be a select show area for Berlin designers.

January will see other venue changes in Berlin. Green Showroom, the show for luxury sustainable fashion formerly housed in the Adlon Hotel, is moving into the landmark Kronprinzenpalais, farther along Unter den Linden. Together with its sister fair Ethical Fashion, these green fashion platforms feature about 100 designers, and will spotlight Dutch eco-fashion this season.

Now in its second edition, Herzblut, the “trade fair for extraordinary fashion,” has atmospheric new quarters for about 40 independent brands in the Heimathafen theater space in Saalbau Neukölln, while Bright, the trade show for streetwear and skateboard fashion collections, is taking up residence in the 1904-built Jansdorf Department store in Mitte.

The fifth edition of The Gallery Berlin will feature a new Fashion Meets Lifestyle studio for accessories, living and beauty products in the ground floor of the Opernwerkstätten. Also in its fifth season, Show & Order is introducing a multimedia fashion show in January, while Capsule is going digital. Exhibitors will be offered a new content delivery system to cut down on printed materials, “lightening everyone’s load at the shows and also helping the environment in a small way,” noted cofounder Edina Sultanik.

Going against the grain, large-size trade show Curvy Is Sexy has attracted two of Germany’s largest brands — Gerry Weber and S. Oliver — to its second edition, which will accommodate about 40 collections.

“If we keep growing like this, we’ll need a new location,” said codirector Tanja Helgert. “People usually say Berlin is only for looking and partying, but every exhibitor wrote well last season, which is why the mood is so positive for January.”

Also getting bigger every season, the volume-oriented Panorama trade fair is introducing two new concepts this season. In the Mall, about 60 to 70 brands will present their franchise and shop-in-shop retail concepts in a 54,000-square-foot shopping mall environment. The target group is potential franchise partners in Eastern Europe, Russia, Asia and the Middle East.

“Our brands want both — to show their collections in Germany, but also to further international expansion with their shop concepts,” said Panorama director Jörg Wichmann of some brands’ double participation at the fair.

Panorama’s new L’Hôtel area, in contrast, aims to create a more intimate, luxurious environment in the style of a five-star hotel lobby, where smaller brands can present their wares, and fair exhibitors and visitors can casually meet over a drink in the Peacock Bar.

“The feedback we’ve gotten is that the exchange between people is very important,” Wichmann said. “The fair is not just to see new things, but to talk. This will be Panorama’s finishing point, whereas the Mall is the starting point.”

While Berlin is now clearly Germany’s fair capital, Düsseldorf and Munich remain key ordering venues a bit later in the season with events like The Gallery and Premium Order Düsseldorf and Supreme by Munich Fashion Co. Munich is also the undisputed place to be for active sportswear with Ispo, featuring more than 2,400 international outdoor, ski, action and performance sports apparel and equipment makers, and attracting more than 80,000 visitors from round the world. Munich Fabric Start in early February is also a key textile event for the domestic and neighboring fashion industry.