Exhibitors were fairly optimistic about holiday and 2018. 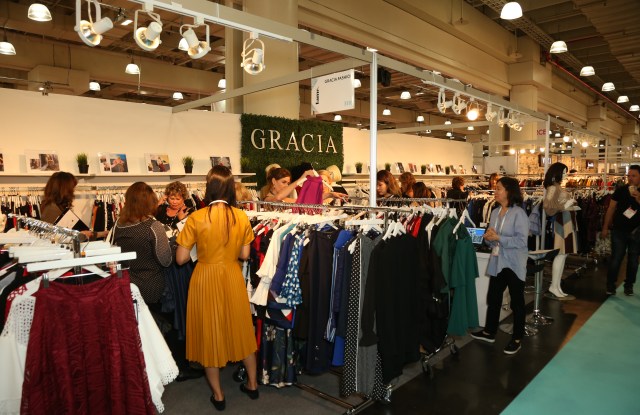 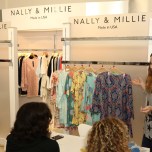 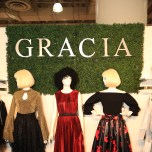 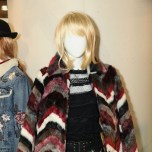 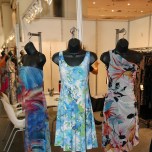 Color and bright prints — along with cut-to-order — were in vogue at the Moda, Fame and Stitch fashion trade shows, but the central theme was the optimism felt by many exhibitors as they look at their order books and ponder 2018.

The three shows were held at the Jacob K. Javits Convention Center and Pier 94 in Manhattan Sept. 17 to 19. Moda is the home to lifestyle and contemporary brands, while Fame focuses on the younger contemporary lines. Stitch showcases brands in the category known as accessible luxury.

In the past year or so, many exhibitors complained of slower traffic at the shows and attributed that to either the changing consumer shopping patterns at retail or to economic uncertainty as they awaited the results of the U.S. presidential election last year. Others said the orders that were placed were mostly from buyers looking for either fill-ins for immediate delivery or for that one special item for their window displays. This time many buyers were placing orders for spring, a sign that several exhibitors took as an early green shoot for 2018.

Angelo Marzocchi, the representative for Elana Kattan and the Dream Dance by Line Art lines, which were showing at Moda, said, “We are having a fantastic show.”

The Elana Kattan line is known for its colorful prints, with dresses featuring draping or ruching around the waist and hip area that’s become a favorite among contemporary consumers between the ages of 30 to 60. The line has an average wholesale price of $100 and is available in synthetic fabrications such as polyester, mesh and jersey knits.

According to Marzocchi, retail buyers “are anticipating a better 2018. They had been cautious and buying closer to season, and in 2017 they were not in a positive mood.” He attributed that to a year filled with “political drama that left the nation unsettled. But now that real estate and stocks are doing well, people are feeling better. Even though [retail and apparel are] struggling, they are seeing some optimism now that soon we will be done with 2017.”

Whimsy Rose, which uses premium dye sublimation designs on cotton-blend fabrics, has a local program where boutique buyers and consumers can go online, choose from among 22 styles and silhouettes for tops and dresses and then customize the print selection. According to owner Peter Daneyko, wholesale prices for buyers average at $38 to $42, while $79 is the sweet spot for the direct-to-consumer site. That latter price point reflects the generally accepted retail practice where the markup is typically 2.2 to 2.5 times the wholesale amount. The company offers new prints on a monthly basis, and the turnaround time from placement of order to receipt of goods is one week. He said patterns and prints in the blue palette are a perennial favorite among buyers, and the favored prints currently are geometrics, florals and abstract patterns.

Daneyko said traffic at Moda improved as the show moved into its second day. “We are booking orders further out. I am seeing some cautious optimism from buyers,” he said. According to Daneyko, the past year or so has been about merchants figuring out how to “recalibrate how they sell so they can create a better experience for the consumer in reaction to the online marketplace.” He explained that his retail customers who have done a better job navigating the changes are the ones adding special shopping events at their boutiques. Those events include themes such as “White and Wine” or a special night where a percentage of sales is earmarked for a specific charity.

At Fame, Dance & Marvel’s owner Kelly Cho said he was surprised at the turnout, and the orders being placed. “This is pretty good — September is usually slow.”

Cho said the company has been “trying to elevate the collection.” Sweaters and knits were items retail buyers were seeking, and velvet was the favored fabric for holiday. Color — embroidered patches — was used as a detail on many items, including a multihued chevron print used on a faux-fur long jacket. Dresses were wholesaling at $18 to $25, while jackets were averaging $49. The end consumers are in the age range of what used to be called the “juniors” category at specialty and department stores. Based on the orders being placed, Cho said he “expects a good holiday selling season.”

Also showing at Fame was the brand Gracia, known for trendy tops and bottoms in the young contemporary space. Joyce Kim, the owner, said the show “had good traffic.” The brand is a regular at Moda, and was present at the August show at Javits. “People are buying for immediate delivery through holiday. In August we saw a slowdown, but in September we are seeing the business picking up,” Kim said, adding that the new styles for fall and holiday are helping the selling season.

Feathers, velvet and pleats were the style trends buyers have been gravitating towards. The average price points for the tops and bottoms are $30 to $40. One top the brand was showcasing was a tiered ivory capelet that had an attached shell, and when paired with a pant gave the outfit the look of a jumpsuit. The top wholesaled for $48.

Showing at Stitch was Connie Roberson, who owns her namesake brand. She was upbeat, noting that traffic at the show was “steady,” with orders being placed for fall through spring deliveries. Roberson specializes in layering pieces — jackets and toppers — in linens and silks. The line wholesales between $116 and $186. Most of her line is tailored for special events throughout the year.

Also showing at Stitch was Nally & Millie, a line that touts “Made in U.S.A.” The primarily tops firm — the company has expanded to include a few dress silhouettes — has an average wholesale price of $42 to $48. Nally Park, the owner, said traffic picked up as the show progressed. Orders placed were for deliveries from Nov. 15 through Feb. 28, 2018, she said.

“We cut to order. There are six seasons, and every other month we offer new something new,” Park said. Buyers at the show seemed more interested in colorful print tops than solids, and Park said tunics were still popular among buyers, although “tops with uneven hemlines seemed to be on the way out.”

While apparel manufacturers tend to skew towards eternal optimism over the next season’s sales, particularly when the preceding one has been lackluster at best, this time they may be onto something. Their optimism seems to parallel early indications elsewhere that there might be some positive news ahead for retail.

Emanuel Chirico, PVH Corp.’s chief executive officer, spoke at Goldman Sachs’ 24th Global Annual Retailing Conference earlier this month at the New York Plaza Hotel, and said that even though the U.S. market remains challenging, there’s been a “bit of an uptick in the business” in the last six weeks since the end of July. Overseas, the mood was also upbeat at the recent Who’s Next fashion trade show in Paris last week where exhibitors cited brisker traffic and more positive sentiment on the show floor.