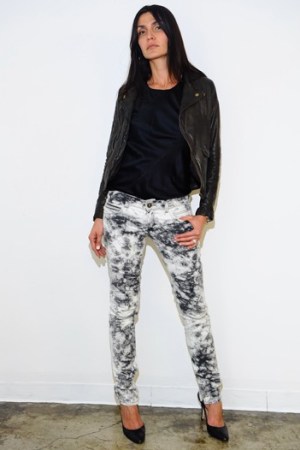 Tight travel budgets shrunk the buyer crowds attending the series of trade shows that occurred at varying lengths from last Friday to Tuesday, including D&A, Brighte Companies and Focus, and showrooms in the California Market Center, Cooper Design Space and New Mart. Local stores were heavily represented among those who did attend.

But buyers generally were tight-fisted and price conscious. Eve Edwards, who has owned Eve & Me in Modesto, Calif., for 31 years, mostly stuck to pieces from $50 to $100 because the troubled economy has virtually killed demand for anything $300 and up at her boutique.

“We are just trying to clear out what’s left from the end of the year and being cautious about how many items we pick up,” she said. “We’ve seen some new lines we like, but we’re not looking to take many chances right now.”

New York-based designer Brooke Martisse, who launched a namesake line a year ago that’s been worn by Beyoncé Knowles, said she’d written just three orders over the course of the Los Angeles market, compared to 20-plus orders recently in New York. “It’s been slow,” she lamented. “Here it’s more of a wait-and-see, people buy after the market ends and they evaluate.”

Vendors did what they could to compel buyers to open their wallets by cutting prices and emphasizing value. Accessories brand Linea Pelle, for instance, lowered handbag wholesale prices across its assortment to $205 and under, down from up to $250 in prior seasons. “We are trying to make it more reachable for retailers,” said sales manager Emily Nagy.

In the contemporary apparel segment, buyers were reluctant to spend on items that would retail for above $200, which translated to less than $100 at wholesale. “Once you move past that $100 or $125 mark, people really think about it,” said Linda Santiago, owner of Ma Jolie boutique in Brentwood, Calif., who added she has cut her buying budget and scaled back inventory to survive the recession.

Items wholesaling for more than $100 had to pop, often combining multiple trends and highlighting versatility.

Vena Cava melded hardware and iridescence in $215 silk dresses printed with a digital photograph of obsidian and trimmed with a zipper running down the front. Twelfth Street by Cynthia Vincent proffered $170 Russian-inspired silk dresses that combined Lurex tie cords on ruched sleeves, an elastic belt and a removable slip. Crispin & Basilio reshaped the motorcycle jacket into $210 cotton coatdresses. Gar-de added a jersey hood and sleeves to $145 waxed cotton jackets.

In denim, novelty was also crucial. Raven offered $89 plaid cotton trousers, whereas Found pushed the envelope with $98 drop-crotch jeans. RockStar Denim, a label launched for fall by former May 75 designer Frank Mechaly, tweaked the motorcycle pant in tie-dye denim for $110. Gerlan Jeans, another brand bowing for fall, made its mark with white zigzags printed on bright blue denim wholesaling for about $95.

Tag Jeans ventured beyond denim to reinterpret the popular legging silhouette with the “tregging,” which looks like a trouser but fits like a legging in double-knit fabric. Wholesaling from $59 to $63, the tregging is available in neutral hues as well as novel prints like plaid and houndstooth.

Ma Jolie’s Santiago praised denim makers for not overdoing jeans. “We’re seeing some of the detailing on jeans move off the pockets and down the leg,” she said. “The boyfriend jean is getting cleaned up at last.”

Accessory buyers, for the most part, didn’t stray from their comfort zone and made safe choices, such as medium-size totes in proven colors of gray, black and brown. It took hot trends and uniqueness at good prices to persuade them to take a chance. Fringe bags by Linea Pelle ranging from $75 to $175 wholesale found takers, as did Sequoia Paris bags made of unusual materials, including shearling and shiny nylon styles for $174 and $90 wholesale, respectively.

Jewelry shoppers also continue to gravitate toward pieces with levity or deep meaning to help them through the tough times. “The whole sentiment thing is very big,” said San Diego-based Sophia & Chloé’s jewelry designer Nathalie Rachel Sherman. Sophia & Chloé introduced honeybee pendants in necklaces wholesaling for $98 and $138, depending on the materials, that are symbols for love.

At North Hollywood, Calif.-based jewelry brand Jenny & Jimbob, a pendant necklace collection took a whimsical route. One example was a meat pendant for $30 wholesale that resembled a misshapen heart to appeal to the brand’s quirky customers, said brand co-founder Jenny Pellitteri. Of retail buyers, she added, “They are looking for things that might make people laugh or smile.”

Certainly, the trade shows could have used some humor to cut through the dour mood. At Focus in the California Market Center, Stephanie Aguiar, West Coast sales representative for Sequoia Paris, fretted about buyers taking excessive notes but not writing orders. “We will see what happens,” she concluded. “All I can do now is call and e-mail them to death.”