There was no missing the proliferation of fur on the fall runways — from cocooning “polar bear” coats at Louis Vuitton to shaggy Mongolian chubbies at Matthew Williamson.

By Nina Jones and Paulina Szmydke on April 8, 2015
View Slideshow 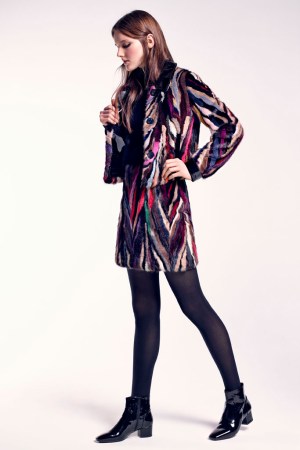 There was no missing the proliferation of fur on the fall runways — from cocooning “polar bear” coats at Louis Vuitton to shaggy Mongolian chubbies at Matthew Williamson. Sophisticated fox and sleek mink made multiple appearances, too, sometimes in allover looks but most often as eye-catching embellishment: dramatic jacket sleeves at Balmain, oversize pockets at Rochas, lionlike collars at Altuzarra, crossbody stoles at Jason Wu and vividly dyed cuffs at Gucci.

And yet, rather than invoking the ire of animal-rights groups such as People for the Ethical Treatment of Animals, top designers’ rampant use of real fur passed without incident.

Mark Oaten, chief executive officer of the International Fur Federation, the global trade body for the fur industry based in the U.K., noted that instead of using fur to make the kind of coats likely to turn up in vintage stores, brands have begun to treat fur more like a textile.

“A lot of designers are using it really not because it’s fur, but because it’s another fabric [available to them],” he said. “They’re not making a statement about producing a fur coat, they’re just using fur as part of their normal collection.”

Figures released by the IFF confirm that fur production continues to rise after experiencing growth of 44 percent in the 10 years from 2001-02 to 2011-12. At retail, global sales totaled about $38.5 billion in 2012-13. And there’s little doubt that fur is having a major moment in 2015. According to Oaten, retailers in the U.K. report sales have risen 20 percent year to date, vis-à-vis the first quarter of 2014.

Several factors — demographic, regulatory, aesthetic and climactic — have each played a role, industry executives said. An increasing level of transparency in the fur trade, along with new production techniques that experiment with textures and colors, have inspired more designers to work the material into their collections, Oaten and others noted.

Frank Zilberkweit, ceo of Polar Furs, which owns the London-based Hockley fur brand, reported that Hockley had seen “a huge increase in sales” in the current year, with numbers up 20 percent.

Contributing to the rise, he said, is a new group of customers. “Young people absolutely embrace fur — they think it’s cool,” he noted. “The generation before had [antifur] issues, which the younger generation rejects.”

Zilberkweit also put forth the case that real fur is more environmentally friendly than faux fur, which was also abundant on fall runways. “It’s a natural renewable resource. We tend to remodel and reshape them [over time], and as they are a natural product, they will biodegrade.”

Furthermore, he said thanks to the IFF’s Origin Assured sourcing program, the fur industry is equally, if not more, transparent than other industries such as leather, meat and fish.

While the existing Origin Assured program guarantees that fur tagged with the label comes from countries with legislation that regulates its farming practices, Oaten said he’s working to implement greater traceability in the fur-supply chain, right back to the farm a fur was sourced from.

“The customers aren’t demanding that, but in our dialogue with designers and the big brands, that’s something we want to be able to offer and put in place,” he said. “We’re already able to do this, but rolling this out on a wider scale takes time.”

Thomas Salomon, head of international sales at French furrier Yves Salomon, echoed this goal, noting traceability is key. “We know exactly where our fur is coming from,” he said. “It’s not like before.”

Salomon reported the company is incessantly investing in new technologies to stay relevant, employing 15 people in its research-and-development unit alone. “What people want above all today is a practical coat,” he said, referring to the brand’s latest offering for fall: a fully reversible mink-down jacket that is four times lighter than a conventional fur coat. “The downside is very low-key, while the mink part is to show off a bit,” he explained.

Salomon projects the coat, which will retail for approximately $10,000 and be available at Saks Fifth Avenue and Bergdorf Goodman, will have a good run in the U.S., the brand’s fastest-growing market.

While sales in France were up 25 percent season-on-season, in the U.S. they spiked 50 percent, he said, helped by two particularly harsh winters with record lows registered across the country. The brand’s signature army parka, with a rabbit or fox lining, sold out within two months in New York City — before winter had actually even started, he said.

The family-owned company, which supplies several fashion brands, including Sonia Rykiel, recognizes that fur as a fashion trend is cyclical. “Whenever fur appears in fashion it helps our business,” Salomon said, noting that this wave was particularly powerful. “You have to remember that years ago, fashion houses kept their fur and fashion lines separate. Today, fur is no longer just couture, or just outerwear. It is totally integrated into the ready-to-wear segment.”

Stephanie Hahn, founder of Stuttgart, Germany-based fashion label 22/4, said she is seeing a demand for real fur and less-expensive faux versions. “I think both options can coexist today,” she said. “[For fall], we chose rabbit because it’s part of the human food chain, hence not protected and not a problem at customs,” she said, adding that she sources the skin via a traditional leather and fur company from Offenbach, Germany. “Germany has very strict laws when it comes to production, and I trust them,” Hahn explained.

Lisa Attia, commercial director of French retailer Le Bon Marché, agreed. “Both real and fake are very much in demand,” she said, as the trend “leaves much room for creative expression and makes fur less of a status symbol.”

Attia, who cited this season’s Céline coat with mink buttons as an example, concluded that the rise in fur’s popularity means the business is no longer solely a matter of price. “Fur is present in every luxury and designer label,’ she noted, “all the way down to more affordable brands such as Kenzo and Carven.”