While the second-quarter earnings results at Ralph Lauren Corp. reflected early progress in the company’s “Next Great Chapter” strategic plan, investors were concerned about higher costs and gross margin declines in the months ahead.

On Tuesday, the company reported adjusted earnings per diluted share of $2.26, which beat Wall Street’s consensus estimate of $2.16. Revenues rose 1.6 percent to $1.69 billion, also beating Wall Street’s estimate of $1.65 billion. Despite the beat, investors on Tuesday sent shares of Ralph Lauren down 6.6 percent to close at $127.79 in Big Board trading.

Wells Fargo analyst Ike Boruchow noted that the EBIT beat of “+3 percent” was the smallest one in three years, and “compares to the 12-to-24-month average of +10 percent.”

The concern of investors centered on a moderation of the company’s gross margin expansion. Gross margin expanded 100 basis points in the quarter ended Sept. 29. Jane Nielsen, chief financial officer, said on the company’s conference call to analysts that the company expects to expand its gross margin by 75 basis points for the full year. The expansion has been boosted by reducing promotions to get average unit retails up, as well as benefits from both the geographic and channel mixes, all of which Nielsen are expected to continue for the full year.

Nielsen also noted that the company has been calling out for some months the dynamic shift it is now seeing. She explained: “Where we’re seeing a switch is really that product cost, which was a slight headwind in the quarter, actually becomes a headwind through Q3 and Q4 and is about 30 to 40 basis points of pressure by the time we exit the year in the fourth quarter. You’ll recall last year that was a tailwind of about 80 basis points. So that’s where the dynamic is shifting.”

The cfo also said those pressures include tariff issues from existing legislation and some freight and input costs inflation “that we’re seeing.” Further, foreign exchange was a tailwind in the first quarter of about 10 basis points and in the second quarter was about 40 basis points, but has moved into a headwind in the second half, the cfo explained. Despite those pressures, Nielsen said, “We’re really pleased that we continue to expect gross margin expansion. And we’re holding to our guidance on gross margin expansion.”

For fiscal year 2019 guidance, the company expects net revenues to be flat to up slightly in constant currency. Foreign currency was projected to have 75 basis points of negative impact on revenue growth for the fiscal year.

For the third quarter, the company guided net revenue to be up low single digits in constant currency, with foreign currency forecast to pressure revenue growth by 100 basis points in the period.

Wells Fargo’s Boruchow said that with sales and margin guidance essentially unchanged for the second half, that leaves “some investors questioning if the upward revision momentum is finally stalling.” He has a “market perform” rating on shares of Ralph Lauren.

The company in the completed quarter celebrated its 50th anniversary fashion show in New York City’s Central Park, which, through its marketing efforts on social, also helped to attract new, younger consumers to the brand.

Ralph Lauren, executive chairman and chief creative officer, said that the 50th anniversary celebration “captured how our brand and the World of Ralph Lauren resonates across generations, cultures and beyond fashion. This is the story, not just of our past, but the one that inspires and builds our future.”

During the call, Patrice Louvet, president and chief executive officer, said the company’s second-quarter results were driven by double-digit, top-line growth in Asia and sequential progress in North America and Europe. Overseas, the company saw an 0.8 percent dip in European sales to $459.2 million, while it posted a 12.9 percent gain in Asian sales to $244.7 million. North American sales were up 1.4 percent, with wholesale revenue flat to last year and retail having its first positive comparable-store sales gain — 1 percent — in over three years on a constant currency basis. Comps reflect a 1 percent decline in brick-and-mortar stores and a 9 percent increase at the company’s web site due in large part to the new platform for its North American digital flagship.

Louvet said the company’s long-term plan is based on three guiding principles: “Put the consumer at the center of everything we do. Elevate and energize our brands. And balance growth and productivity.”

He said the anniversary show in September during New York Fashion Week drove “record levels of engagement around the world, across digital and social media. We had more than 3 billion social media impressions and over 100 million global views of the show online. Importantly, search volume for the brand increased high single digits versus the same period last year based on Google analytics.”

Louvet said the company continues to energize core products and accelerate under-developed categories. New partnerships include a limited-edition capsule with Mr Porter, a men’s online retailer, last month. Available on Friday will be a capsule collection of men’s wear pieces with London-based streetwear brand Palace. The capsule will be available through the company’s recently launched Polo app, on its new digital flagship in Europe and across Palace’s retail network. The ceo also said the company just made available its first wear-to-work offering in its women’s Polo brand in select, directly operated retail doors and at the company’s web site.

The company’s global digital business saw revenue grow 10 percent to last year. In China, the company launched its directly operated digital site, which is the exclusive online destination for its luxury labels. The premium experience on the site includes free online and in-store returns, same-day delivery in Shanghai, live chat customer service and integration with WeChat.

Overseas, the company opened 25 stores in Asia, with 10 in China. The openings were in key city clusters that include Beijing, Taipei, Shanghai and Hong Kong. The company also opened two full-priced stores in Europe, one in London and the other in Manchester. 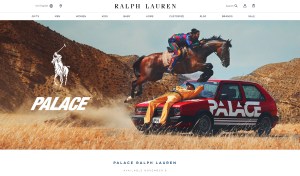 The Palace Ralph Lauren capsule will be available on Friday.