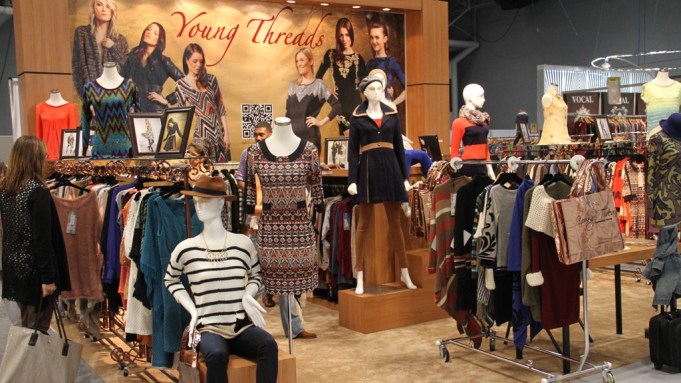 Buyers complained about a lack of newness at the trade shows held earlier this month in Manhattan at the Jacob K. Javits Convention Center and Pier 94. The three apparel shows were Intermezzo Collections, Moda Manhattan and Fame.

Annette Matczak, owner of Buckingham, Pa.-based boutique Intrigue, who walked all three shows, said, “I had a hard time finding anything new. We need to bring in more newness. I need something to buy that’s not already in her wardrobe. We won’t buy anything. We’ll stick to classics that we know will sell.”

Intrigue caters to the updated contemporary woman between ages 30 to 60. “She’s edgy, but not funky,” Matczak said.

Marsha Gross, of boutique Clutch in Larchmont, N.Y., observed of Intermezzo, “It’s a good show, but I would love to see more new vendors. I see the same ones over and over. This show is tough as it’s in between seasons. It has immediate deliveries, holiday, spring and resort. There’s also too much summer product for a New York show.”

Both had bought most of their core inventory to stock their stores earlier in the summer and were hoping to pick up a few items to wow their clientele.

Tom Nastos, president of ENK International, which produces Intermezzo, explained that newness in contemporary apparel isn’t necessarily the prime objective given the August showing and the production cycle viewpoint. “This entire market is effectively a pre-collection time period. What we’ve been observing is that people are buying later in the cycle. There are many more orders for immediates to fill in the inventory. The August show fills in that cycle,” he said.

ENK had marketed the show as holiday and resort, and this year worked closely with The K-Fashion Project, featuring a collection from Korean fashion designers. “We see this show and the one in January as representing a greater international footprint,” Nastos said.

He added that the attendees at the show had comped up from the tally from a year ago.

Dee Gratz-Jones, director of sales at the fashion merchandising group of Business Journals Inc., which produced Moda Manhattan and Fame, said she was “pleasantly surprised at the traffic,” given that the August presentation is the in-between season show. She noted that the shows had between 25 to 30 new resources compared with a year ago.

According to Sara Simonow, a spokeswoman for BJI Fashion Group, which produced Moda Manhattan and Fame, “With over 2,500 collections at this past edition of Moda Manhattan, AccessoriesTheShow and Fame, there was a great selection of new lines present.”

At Nanette Lepore, front and center on display was a short red leather jacket wholesaling for $318.

According to Megan Darling, vice president of sales, the shorter jackets have been selling well. “That’s because of their fit and versatility,” she said, noting too that the red color palette also is getting good feedback from buyers. The company was showing holiday and its first spring deliveries at the show.

As for the show itself, Darling said traffic was similar to a year ago.

Over at Plenty by Tracy Reese, the company was emphasizing its new bridge dress collection, which was wholesaling for between $44 and $63. According to Kaitlin Warren, who was in town from the firm’s Atlanta showroom, most of the fabrications are polyester or polyester-based combinations.

Jaime Nortman, partner at Peace of Cloth, was showing new offerings from the firm’s knit and woven collection, which included its paramount knit fabrication for bottoms that is comprised of a viscose and nylon base.

“There’s no bagging at the knee and no pilling,” Nortman said of the fabric, which is also machine washable.

The company also was showing its classic skinny jean, a five-pocket jegging that wholesales for between $84 and $88.

She said many of the buyers were shopping for immediate deliveries to add to current inventory already in the stores, and noted that Peace of Cloth has a service where buyers can use color cards to aid in ordering product, which can then be shipped to the specialty stores within 48 hours. All product offerings from the company are “Made in New York City.”

Tracy Negoshian was one of the new resources showing at Moda.

Her dress line was bright and very pattern-driven. Carolyn Niller, the New England sales representative, said the company was showing spring, with easy-care polyester-spandex blends that are works well with resort and travel attire. Dresses range from $54 to $68 at wholesale, with most of the product line sold at specialty boutiques.

Judy Petraitis, the owner of Judy P, was showing tops of all styles and sizes. Her tops in a microfiber-spandex combination feature a double layer in the front and wholesale around $36 on average.

Carol Wright, a buyer for Vernon Powell Shoes in Salisbury, Md., is a repeat customer. “I’m looking for something to bring out from the store and put it in the front window. That’s the icing on the cake to get shoppers in the door,” she said. She was looking at the tops and a dress style that she described as “really good quality.” The dresses, of the same fabrication as the tops, were wholesaling for $50 and $56.

Canadian accessories firm Mitchie’s Matchings was a collection of color, from core black, gray, camel and red to neon brights, mostly in fox fur with some rabbit mixed in.

Sallie Silvey, an account representative, said, “We’ve got colors, and that’s the story.” She noted that fox has been outselling rabbit. A foxtail neck wrap was wholesaling for $150. New for Mitchie’s this season were snap-on cuffs that used a hinge to easily wrap around the wrists, wholesaling for $55. Favorite bright colors were raspberry and electric blue, while neons were overselling the core basics.

“The colors are a good accent against black because it can change the whole outfit,” said Silvey, who added that this year buyers seemed a bit more upbeat than in previous seasons.

Young Threads had one of the more interesting displays.

According to general manager Rohan Poddar, “There’s less newness in general. Business isn’t so great all around, so you get too scared to be too innovative. You don’t want to be left with too much inventory.”

While much of the product was for fall and early winter, many of the lighter-weight fabrications for dresses and tops seemed almost seasonless. A few key pieces were a Lurex weave sweater dress in three colors featuring a zigzag pattern wholesaling for $26, and an on-trend red and black color-block dress with three-quarter sleeves was wholesaling for $24.

At Ark & Co., a Los Angeles-based resource for juniors, Kevin Lee, accounts director, said items selling well were casualwear that can be worn from work to dinner. A black and gold dress that was 95 percent polyester and 5 percent spandex, featuring a lining in 100 percent polyester, was wholesaling for $32. Tops were wholesaling between $15 and $25, and the selection featured sexy cutouts as well as crop tops. Most items were for fall, such as the black, pink and ivory fake fur vest wholesaling for $28.