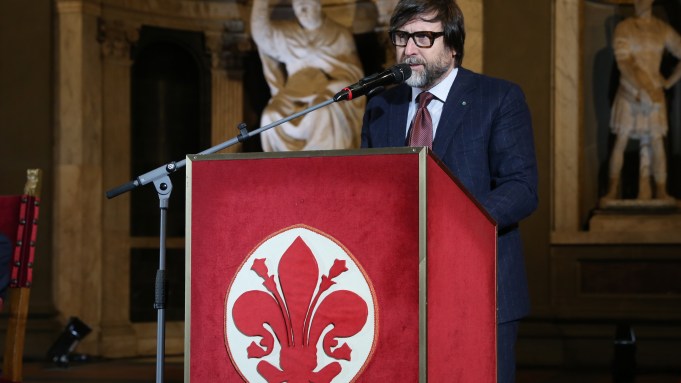 The most recent figures on German growth do not make for cheerful reading. The country has gone from an engine of economic growth for the whole of the European Union to a problematic market barely avoiding recession. Last week, as part of its official spring 2019 forecast for the EU, the European Commission predicted only 0.5 percent growth for Germany.

That is why the German market is so worrying, Claudio Marenzi, head of Italy’s Confindustria Moda, admitted at a press conference in Florence last week.

Marenzi’s federation represents around 67,000 Italian companies and he was there to introduce the next edition of Pitti Uomo, although he also presented Italian sector results for 2018. In Germany, there was a 0.7 percent fall, he said. Given that Germany is one of Italy’s biggest trading partners when it comes to textiles and apparel, with around 10 percent of related Italian exports going there, there is ongoing concern about that market, Marenzi said.

He is right to be concerned, François-Marie Grau, the managing director of the French Federation of Women’s Ready-to-Wear, told WWD. The French are worried, too, Grau added. “Germany is our third-largest customer in clothing products after Italy and Spain, and the fourth largest in women’s ready-to-wear.”

Of total French exports in the sector, about 9 percent go to Germany, or around 1.1 billion euros worth in 2018, Grau noted.

“So the slowdown of growth, and then probably of consumption, in Germany is not good news for French brands,” Grau said. “It depends on how German customers react, of course,” the director of the organization which acts as an advocate and adviser for several regional fashion associations, suggested. “We will see if this slowdown has an impact on our exports in the coming months. But this is usually the case.”

Over the past year or so, estimates for German growth have been adjusted more than once, with the number sliding from a somewhat rosy 2.5 percent increase, as predicted in December 2017, to 1.5 percent in mid-2018, to last week’s more worrying numbers. In 2018, Germany grew 1.5 percent, the slowest it had expanded since 2013. And all of this is in line with predictions by the likes of consultancy McKinsey, which warned the fashion industry earlier this year that global growth would plateau soon.

In the first quarter, Germany’s Federal Statistical Office noted, sales of textiles, clothing and shoes had fallen slightly (minus 0.3 percent) compared to the previous year. Another study also released last week by GfK, Germany’s largest market research institute, showed that brick-and-mortar, which makes up almost three-quarters of all of the country’s retail sales, was also underperforming compared to other European countries. Growth of only 0.8 percent was predicted for 2019, the GfK’s research said.

Despite such disagreeable news, experts inside Germany are not quite as concerned, pointing out that, as an export-based economy, the country is having issues due to international trade tensions, including Brexit and the China-U.S. relationship. The domestic market, they said, remains strong.

“After 10 years of growth, the German economy is seeing a light fall,” Ulla Ertelt, managing director of Frankfurt-based apparel and textile sector specialist HML Modemarketing, told WWD. “But up until now, this fall has not had any significant impact on consumer behavior. And that is why I don’t share those concerns [of Marenzi and Grau].”

In fact, as Ertelt pointed out, the luxury fashion sector in Germany — much of the product comes from Italy and France — has been stable and growing for years. On the other hand, she said, the middle market has plenty of cause for concern.

Several brands approached by WWD said they did not want to comment on economic issues but it’s clear that midsector brands continue to find Germany a tough market. There’s been a rash of local insolvencies in that sector and during a press conference on quarterly results in March, British online retailer Asos described the German market as an ongoing challenge. Primark reported similar issues in Germany in January. Net sales in Germany for Swedish giant H&M fell 7 percent during the first quarter of 2019, although the company said the decline mostly had to do with a transition to online; in 2018, H&M’s total net sales in Germany fell 1 percent.

“This sector has been going backwards for several seasons now in Germany, due to a decrease in average prices,” Ertelt explained. “The increased tendency to shop online allows for better transparency on price and in times of uncertain economic development, the consumer uses that more often [to get a better deal].”

Sebastian Boger, a partner and fashion industry analyst at the Boston Consulting Group, based in Frankfurt, agreed. “Germany is not a major market for luxury brands, so those brands will not suffer too much,” he noted. “I can’t see a big problem for the Italian fashion industry. The most affected brands in Germany are located in the midprice and value segment. Any [ongoing] slowdown would impact them much more,” he concluded.

As the EU’s Spring 2019 European Economic Forecast also pointed out, Germany still has good consumer demand, a budget surplus and a supportive labor market — in other words, a strong economic backbone exists. “The market is large and strong,” Boger continued, “and developments in Germany are in line with other countries.”

One way to overcome the German bump in the road is to look further afield, experts said. At the Florence press conference last week, Italy’s Marenzi said that the best business was being done in markets outside of Europe, like the U.S. and China.

“As advisers to French brands, we consider that there are better prospects outside the EU,” France’s Grau confirmed, before reeling off statistics for French fashion export growth in China (21 percent), South Korea and Russia (11 percent each) and the United Arab Emirates (18 percent). “But the EU markets are still very important and cannot be neglected.”

Consultants Boger and Ertelt both believe the biggest challenges in the German market currently come from online. Around 10 percent of all retail sales were online in Germany in 2018. But that is lower than the estimated global average of around 14 percent. So there is clearly room for growth in this area, as well as ongoing disruption.

“The most important thing is to focus on…fixing your operating model,” Boger advised. “Italian brands in particular could do much better with verticalization, e-commerce and digital marketing.”