All signs point downward with no quick end in sight. 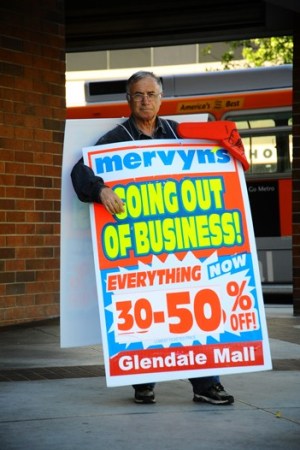 Hard times are getting even harder for retailers and manufacturers in California.

This story first appeared in the November 12, 2008 issue of WWD. Subscribe Today.

From the glittery confines of Los Angeles to the cradle of technology in Silicon Valley, jobs are disappearing, retail vacancies are up, home values are down, mall upgrades are on hold and consumer confidence has been staggered. Few, if any, sectors are being spared and there will be no quick recovery, executives and economists said.

“I think California as a whole is taking a harder knock than many other parts of the country,” Martens said. “October was an incredibly challenging month for us. Any good business we’ve done was through events. People are buying more carefully and returning [merchandise] much more frequently.”

The rising alarms in the nation’s most populous state and its biggest market, with a gross domestic product of about $1.7 trillion — roughly equal to Italy’s — have far-ranging implications.

“We are 12 percent of the national economy, so what happens in the nation happens here,” said Jerry Nickelsburg, a senior economist at the UCLA Anderson Forecast. “In September and October, we had a lot of bad news out of Washington. There was a huge amount of uncertainty….We are not expecting retail to come back until the middle of next year.”

Hayward, Calif.-based Mervyns’ and Sherman Oaks, Calif.-based Shoe Pavilion’s going-out-of-business sales are stark reminders of the retail sector’s troubles. After 59 years, Mervyns is liquidating all merchandise at its 149 stores and auctioning store leases. Shoe Pavilion said it would shutter all 64 stores after 29 years.

Overall retail vacancy rates, which were as low as 2.3 percent a year ago, have climbed to 3.5 percent or higher in some pockets of Southern California, according to NAI Capital, an Encino, Calif.-based commercial real estate consultancy. Market conditions are expected to soften more in 2009, and 4.5 million square feet of commercial space completed in Southern California in the last 12 months and another 3.7 million square feet under way could worsen the situation.

Retail, office and industrial sales activity is down because of the combination of the lack of credit as well as buyer resistance to prices in the softening market. NAI Capital’s report projects significant declines in property values in future quarters, with the biggest drops in office and retail, followed by industrial and apartment space.

“We are not at the beginning, but we are closer to the beginning than we are to the end,” said Richard Giss, a retail partner at Deloitte & Touche LLP in Los Angeles.

The battered housing market and pessimistic consumer mind-set have been twin punches to the gut of the state economy.

Gov. Arnold Schwarzenegger this month urged the state legislature to impose a 90-day freeze on pending home foreclosures to provide some relief.

“The bottoming out is probably some time in 2010,” Tara Bleakley, vice president of Irvine, Calif.-based John Burns Real Estate Consultants, said of the real estate market.

Almost three-quarters of Californians surveyed by the Public Policy Institute of California in October believed that the state would suffer from bad financial times during the next year. Even more, 79 percent, considered the state to be in a mild to serious recession.

Job growth is almost nonexistent. The UCLA Anderson Forecast reported that in the second quarter jobs were shed in most sectors, and total employment in the state shrank by 9,000 jobs. In Silicon Valley, Sunnyvale, Calif.-based Yahoo Inc. said it will lay off at least 10 percent of its 15,000-person workforce, and Cisco Systems Inc. in San Jose plans to limit new hires as part of its efforts to reduce spending by $1 billion. Mattel Inc., based in El Segundo, Calif., is cutting 1,000 positions, 3 percent of its professional staff.

Stephen Levy, director of the Palo Alto, Calif.-based private economic research firm Center for Continuing Study of the California Economy, forecast the state unemployment rate might reach as high as 9 percent next year.

Malls are trying to pinpoint strategies to cut expenses and to get customers through the doors. Chicago-based General Growth Properties Inc., which has 20 of its 200 malls in California, warned Tuesday that it might declare bankruptcy if it cannot secure funds to cover its near-term debt.

“In the end, it’s all about the retailers and everybody needs to do what they need to do to make sales,” said Janet LeFevre, senior marketing manager at GGP’s Glendale Galleria. The shopping center will allow some of its retail tenants, including the Disney Store, American Eagle and Aéropostale, to open at midnight on Black Friday.

Westfield Group, California’s largest mall owner with 24 centers, believes that enhancements at properties such as Century City in Los Angeles and Fox Hills in Culver City, will help attract consumers.

“We want to create the best environments to capture the biggest share of whatever money is being spent,” said Katy Dickey, a spokeswoman. “We think we can do that by reinvesting and creating the types of environments that attract consumers.”

The economic tremors are being felt throughout California’s apparel sector. A representative of Santa Monica, Calif.-based Zooey, the high-end T-shirt label owned by Chicago’s Hartmarx Corp., said discussions were under way on whether the four-year-old label should be shuttered. Hartmarx didn’t return a call for comment.

Many designers are trying to be proactive.

Corey Lynn Calter, a contemporary designer known for the quirky prints on her girlish designs, is one of the few designers who will be showing sales growth this year — 8 percent compared with increases of as much as 35 percent over the last three years. Still, Calter has offered free shipping for orders made at some domestic trade shows. Her line, which wholesales from $68 to $121, is carried in 250 stores including TG-170 and Olive & Bette’s in New York.

Rachel Pally, who launched her namesake line of jersey dresses six years ago, is reducing some prices. For retailers such as Nordstrom, she lowered the price on one style by $15 so that it will sell for just under $200. “Some of our department stores, they’re feeling a little price-resistant,” she said.

Prvcy Premium, a Los Angeles-based denim label, is shifting its advertising from national consumer magazines such as O, The Oprah Magazine and Cosmopolitan to niche and regional titles, including Teen Vogue, Nylon, Theme, 944 and Ocean. Not only do the open ad rates for the lower-profile publications cost 80 percent less than what the major magazines charge, but Prvcy also can target its marketing on a shopper who is more inclined to continue spending money in a slowing economy.

Komarov, a women’s contemporary line based in Los Angeles that has generated annual sales of $8 million, even built a domestic factory in California that is employing 50 people. Komarov used to make half of its products in China until prices there started escalating and worries of having its designs counterfeited motivated a to return to the U.S. In addition, a growing number of retailers have requested orders to be delivered 30 to 45 days after they submit their paperwork. In the past, stores would receive shipments 60 to 120 days after placing orders.

“We realized the lead-time and the quality in China is not as good as here,” said Dimitri Komarov, owner and president. “The people who survive this tough turn will be way ahead and stronger. It’s time to make your mark right now.”

Apparel and retail sector drops have translated into slower port activity. From 2007 to 2008, trade information resource PIERS estimated that container exports and imports at the ports of Los Angeles and Long Beach, which make up the nation’s busiest port complex, will fall about 4 percent from 10.61 million 20-foot equivalent units, or TEUs — the standard maritime industry measurement used to count cargo — to 10.22 million.

With little to celebrate, some events have been scaled back, if not called off. Last month, the Los Angeles Fashion Awards canceled what would have been its fourth annual gala honoring local designers and retailers due to lack of funds.

California voters last week didn’t help retailers and apparel makers. They approved Proposition 8, which recognizes only marriages between men and women. Same-sex marriages were expected to boost the economy, leading to as much as $683.6 million in revenue in the next three years from weddings, hotels, marriage license fees, taxes and other tourism-related activities, according to a study by the Williams Institute on Sexual Orientation Law and Public Policy at the UCLA School of Law.

Proposition R, a half-cent sales tax in Los Angeles County for transportation projects, got the OK from voters, too. Schwarzenegger has floated the idea of an additional 1.5-cent on the dollar state sales tax increase — taking Los Angeles County’s rate to 10.25 percent — to raise almost $10 billion over the next two years. The state is facing an $11.2 billion budget shortfall and has seen tax revenue dip 10 percent. “It is a burden to retailers, there is no question,” said Deloitte’s Giss of the sales tax hikes.

If there’s any consolation for retailers and apparel firms, it is that gas prices have dropped and California’s history is marked by severe economic slides followed by upturns of equal or greater ferocity.

“The economy, when it comes back, will roar out of this,” Giss said.