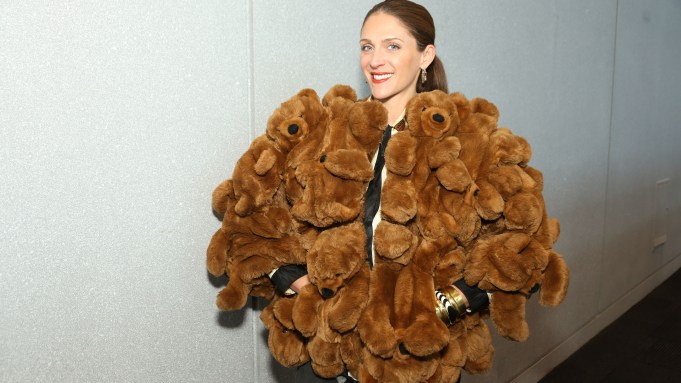 Intermezzo Collections, which ended its three-day run Tuesday at the Jacob K. Javits Convention Center in New York, was the final edition of that trade show. As reported, UBM Fashion, producer of fashion trade shows, will introduce a pre-collections show in June (which includes Coterie, Fame, Moda, AccessoriesTheShow and Pool Trade Show) and a dual-gender fashion trade show in July and again in January 2019.

In its final edition, Intermezzo featured Vintage@Intermezzo, which offered a mix of vintage apparel and accessories, ranging from Chanel handbags to rare Victorian and Asian pieces, to luxury vintage designer gowns and furs. The admission price was $20 to the general public, and the section was attended by stylists, designers, retailers and vintage fans.

Bridgette Morphew, cofounder of Morphew, a vintage clothing company, said, “It was the best show ever.” She said she sold a reworked Victorian lace dress that Emily Ratajkowski wore during Milan Fashion Week for $2,400. She also sold four pieces to Alexander Wang for design inspiration, and Jill Stuart bought several items, including a printed dress for her daughter. Starting in June, the vintage show will relocate to Coterie.

According to Peter Berta, director of sales at UBM, Vintage@Coterie will include even more elevated brands and more European vintage dealers. This time, there were 22 vendors in the Vintage@Intermezzo section, the same number as last time.

Berta noted that next year, Intermezzo will be re-branded as Project Women’s, and will run side by side with Project Men’s. It will run the second to last week of January and be “dual gender.”

Alexandra Steinberg, founder of Classic Coco, has been in business since 2011 selling vintage Chanel handbags. Her collection retailed from $750 to $3,000, with one crocodile listed at $10,000.

“I get them all over the world,” said Steinberg, who is based in Philadelphia and travels to such places as Dubai, New York and the Philippines. She said she did “really well” at the show and plans to exhibit with UBM again. Among her bestsellers were the classic bags that are timeless. “We were selling to individuals and a bunch of stores came buy and bought three or four and a necklace,” she said. Steinberg said she tries to find the best quality bags for the most affordable prices. “I buy them or I do consignment. I don’t want to do crazy prices. That’s my whole obsession,” she said — to make Chanel accessible to as many people as she can.

Tara Munro, owner of Ooh la la! Vintage, which sells European retro and vintage clothes, said she sold a Castelbajac coat to Jill Stuart, and was also selling some Pucci blouses, Fifties vintage New Look dresses and a satin and waterproof raincoat. She said she decided to participate in the vintage show because she needed to widen her horizons beyond London and Paris. “I’ve been doing this for 10 years,” she said, and wanted to expand to American clients. She said she travels everywhere for merchandise, such as Ireland, Scotland, Mexico, the California desert. “I’d kind of a gypsy,” she said. Her offerings retailed from $250 for a Pucci shirt to $1,400 for a Twenties devore coat.

Angel Cruz of Selima Optique was selling a lot of vintage eyewear at the show. “We do really well with the vintage Ray-Bans and Christian Dior,” he said. “We’re selling to individuals and designers.” The eyewear ranges from $250 for Lacroix to $1,800 for Cartier. He said the eyewear is “dead stock,” it’s never been worn and they get them from stores. “The current trend is all the smaller frames,” he added. He noted that aviators do really well from Dior at Ray-Ban.

At Intermezzo, John Eshaya, owner of Jet by John Eshaya, said traffic was pretty steady on Sunday and Monday. He said he feels Intermezzo is one of the best shows. “People can sit down and concentrate. There are 10 aisles and all the good brands are here,” he said. He said retailers were buying for February and March deliveries. What he was selling was “anything novelty.”

“People had a good fall and winter sell-throughs are strong. People realize they need some stuff in stores right now. I haven’t heard people complaining about business,” he added.

Rachel Manning, sales coordinator for Misa Los Angeles, said traffic has been steady and they’ve been selling summer merchandise. “Summer is one of our strongest seasons, and our main focus is summer,” she said. Strong performers have been dresses, especially those with slit sleeves. “More novelty items stand out, as well as trims and embellishments,” she said.

Geralyn R. Breig, chief executive officer of AnytownUSA.com, was shopping with Karen Sadick, for merchandise for their new web site that will sell products made exclusively in the U.S. Set to launch in April, the site will sell apparel, footwear, accessories and small leather goods. Breig and Sadick want it to operate like a marketplace, giving vendors an opportunity to have a shop on their site.

“We’re looking to drive consumers to the Web site and for consumers to find a one-stop place,” said Sadick. She said she found that the merchandise at Intermezzo “looked really fresh this season” and she was particularly excited about the “great shirtings, knits and T-shirts.”

Chris Easter, sales manager at Free People, said he had a really good show and was selling immediates through summer merchandise. “Knits are always superstrong for us, as are sweaters and dresses,” he said. He said he was doing extremely well with denim skirts for spring and summer and was pleased with show traffic.

Ciao Milano, based in Englewood Cliffs, N.J., was also having strong sales with merchandise such as rainwear, puffer jackets and mommy-and-me looks. “We opened up a lot of new accounts and saw accounts that we already do business with,” said Lisa Lenchner, a sales representative. Most of the business they were doing at the show was immediates.

Makenzie Carter, director of brand development, and Morgan Turner, buyer, were shopping for their store in Seaside, Fla. called Seaside Style. “We’re looking for resortwear, summer is our big season,” said Turner. They were buying from summer looks from Roberta Roller Rabbit and Michael Stars, as well as Oliphant (summer maxis and caftans), Bella Dahl (beachy pants and shorts) and Bindi (embroidered dresses and cover-ups).

“This is a good show for us. Summer isn’t big for traditional retailers, but it’s big for us,” said Turner.

Rusty Lester, ceo of Frances Kahn, the three-unit retailer based in Richmond, Va., said he was shopping the trade shows in pursuit of accessories and immediate fill-ins on apparel. He said he has mixed emotions about Intermezzo ending. “They’re thinking about efficiency and monetary value for them, but it’s not good for the retailer,” said Lester. “A June show is of no value,” he said. He said by moving this trade show to later in January, it gets too close to Coterie. “How many stores can come in at a drop of a hat?”