Spitalnick was president of Evan-Picone and founder of Spitalnick & Co.

Services were held Wednesday for Irving Spitalnick, an entrepreneurial fashion executive who was president of Evan-Picone and owner of Spitalnick & Co., among numerous fashion ventures.

Spitalnick, 88, died of complications from Alzheimer’s at an assisted living facility on Long Island on Tuesday, according to his daughter, Bonnie Spitalnick Sachs.

As president of Evan-Picone during its growth in the Seventies, Spitalnick helped American women transform their wardrobes from denim jeans and miniskirts to separates appropriate for executive offices. A tall, imposing man, Spitalnick developed a reputation on Seventh Avenue for being demanding, intuitive about what the customer wanted, a savvy networker and a master merchant.

Born and raised in Brooklyn, Spitalnick graduated from Samuel J. Tilden High School before being inducted into the U.S. Army. He was stationed in Germany during the Korean War.

He got his first taste of being a salesman as a young man, working before school at his parents’ butcher shop and also selling bottled milk to people’s homes. He started a newspaper concession in his high school and convinced the social studies teachers to make the newspapers required reading. “That’s the kind of salesperson he was,” said Sachs.

“My father was really driven. He grew up incredibly poor and did not want to see anyone suffer the way his parents did through hardship,” said Sachs. “Every challenge he came across was an opportunity. His outlook was always positive. He was a mentor and a fantastic storyteller, and he could really listen.”

One of his sons, Arthur Spitalnick, said, “He was a hustler doing everything he could to get ahead. He was a very motivated young guy.”

After the Army,  Spitalnick took sales jobs at Stylecraft Hosiery (where his sister worked) and Rosecrest, a coordinates house, before joining Evan-Picone in 1962 as a salesman. He rose to become vice president of sales, was named president in 1969, and eventually became an owner. Revlon had bought Evan-Picone in 1962 for $12 million, and owned it for four years. Spitalnick and Joseph Picone, a cofounder who started the company with Charles Evans in 1949,  bought the company back from Revlon and ran it several years before selling it to Palm Beach Inc. in 1973.

Spitalnick’s ability to court store management and corral expensive floor space for Evan-Picone — which dominated the sportswear business — made him one of the most respected executives of his day.  He built a network of retail friends whom he was able to call upon as he launched his different companies.

Frank Doroff, former vice chairman of Bloomingdale’s, recalled Thursday his dealings with Spitalnick when Doroff was at Macy’s. “He was such an incredibly vibrant guy. He was like the king. Irving practically invented the better sportswear business. He had one of the best lines out there and he used his leverage,” Doroff said.

Michael Gould, former chairman and ceo of Bloomingdale’s, met Spitalnick when Gould was at J.W. Robinson’s. “He epitomized what a merchant was to me. He was a real merchant. It was about product,” said Gould.

In 1980, Spitalnick was ousted from Evan-Picone by Palm Beach’s board for cause, but the company gave no further reason for the decision. Spitalnick said at the time it was a mutual decision to leave. “I have a dispute with them. There’s no point in talking about it. It was just a disagreement,” he told WWD at the time. The women’s business at Palm Beach (consolidated under the Evan-Picone group) had generated $140.9 million in sales for the year ended Dec. 31, 1979, with operating profits of $27.1 million.

Following his departure from Evan-Picone, Spitalnick began other business ventures such as construction of a building in Westchester County, and a nursing home in Fair Lawn, N.J. He went on to start West Bay Sport Leathers with partners Robert and Irwin Winer. The business was run by his daughter, Bonnie.

“I don’t do anything ‘hot,’” Spitalnick told WWD in 1982. “I’m afraid to. You’ve got to be very smart to do hot items. I conceptualize well, and I feel I was instrumental in dressing women in career apparel, but wardrobes are dull now. We met her demand, now it’s time to create something new.”

After a three-year non-compete with Evan-Picone, Spitalnick began his namesake brand in 1983, and recruited Cynthia Steffe to design it. Steffe, who had never been a head designer before and was an assistant to Donna Karan and Louis Dell’Olio at Anne Klein, designed Spitalnick for six years and helped establish the company as a major brand in the bridge category. In fall 1984, Spitalnick introduced its first collection, and booked double what had been projected, selling more than 400,000 units and generating wholesale volume of $20 million. In its first year, Spitalnick & Co. generated an annual wholesale volume of $50 million.

“I wanted to find a rising star,” Spitalnick told WWD in 1985. “It was a high risk, but I wanted a fresh, new approach — someone aggressive and independent with the ability not only to design but to see things through. I watched Cynthia when she was at Parsons and I was president of Evan-Picone. I wanted her then but she wasn’t interested in a company like that. Then when I began Spitalnick and I could have my pick of any designers, I chose her. It was gut instinct.”

With this collection, Spitalnick took a dramatic step away from the gray flannel suit and prim bow-tie blouse looks that permeated the Evan-Picone collection, and offered sleek black and white jackets mixed with nubby sweaters, brilliantly colored blouses and patterned skirts to create an individualized look. 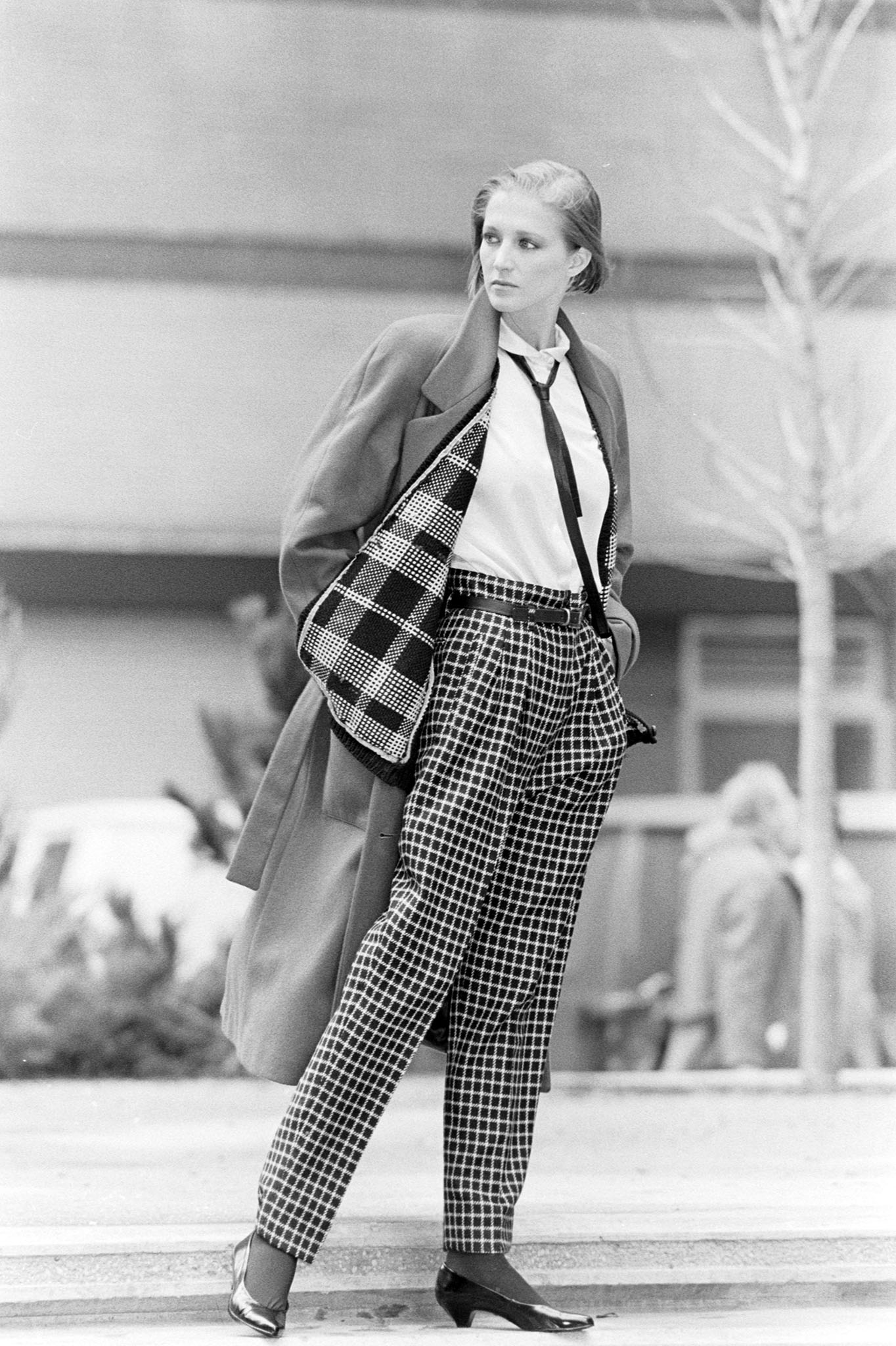 The gamble, he said, paid off. The company offered smartly tailored separates in coordinated fabric and color groups. Spitalnick began a 10-month-a-year shipping program, where each month a new group of separates to be worn together or mixed and matched were shipped to stores to give a fresh look.

“When we opened up, everybody came to us,” Spitalnick told WWD in 1985. He sold  275 major department and specialty stores, from Bergdorf Goodman and Neiman Marcus to Saks Fifth Avenue and I. Magnin, as well as Gimbels and John Wanamaker. But some stores had difficulty selling such sophisticated better-price sportswear at full price.

At the time, Spitalnick took issue with those stores that couldn’t sell his line and denied that he required stores to purchase initial minimums. “If they don’t buy an appropriate merchandise mix, I won’t sell it to them. If they can’t present it properly on the selling floor it should be there. We’re not in the custom-made clothing business,” he told WWD in 1985.

Cynthia Steffe told WWD Thursday, “Irving was bigger than life — he was the ultimate salesman. There wasn’t a retailer in America who didn’t do business with Irving if he wanted them to. I can still hear him say, ‘I’m a thousand percent sure!'”

“His business acumen and flamboyant style went hand in hand. Business travel was always first-class, and he spared no expense entertaining his customers — many were amongst his best friends,” Steffe said.

“He would take the Concorde to Paris during fashion week, not to see the shows, but because he knew his customers would be there. He made each customer feel like they were the most important one. I remember once during market week he had Neiman Marcus in his office, Saks in the conference room, and Nordstrom in the showroom. They all thought that they had his undivided attention! Even though business was important to him, his family came first,” said Steffe.

Always outspoken, Spitalnick lamented the sameness on the selling floor, saying in 1984, “The sameness is beyond belief now, from the basement to the better departments. Private label is the downfall of the sportswear departments.” For the Spitalnick collection, he worked closely with U.S. mills, and used domestic factories for most of his production.

In 1990, Leslie Fay Cos. acquired Spitalnick, and part of the deal was having Irving Spitalnick head Breckenridge. Also included in the deal was the Spitalnick Design Center, West Bay Leathers and Willi Max.

Laura Pomerantz, who was executive vice president of Leslie Fay at the time, and today is vice chairman of Cushman & Wakefield, said Thursday, “Irving was incredible. He was so smart, he had the best sense of humor, he was a great mentor  and he was a character — a real character.”

Describing Spitalnick as a talented salesman and an operations person, Pomerantz said, “He knew how to make money in the Garment Center.”

His daughter, Sachs, who frequently worked with her father, added, “My father knew every store president, every merchandise manager and every buyer by name.  He taught us to talk to assistant buyers with the same level of respect. He used to say if they were there, their goal was to get to the top, so always treat everything like they are in charge.”

Spitalnick later started Juliana Collezione, a high-end sportswear collection sold through the home, which was sold to Worth in 2008. At that point, Spitalnick retired.

Among Spitalnick’s philanthropic endeavors were the Albert Einstein College of Medicine, where he and his wife, Ruth, set up an endowment in their names, and the Juvenile Diabetes Research Foundation.

In addition to his daughter Bonnie and son Arthur, Spitalnick is survived by his wife, Ruth; sons, Robert and Bill, 10 grandchildren, and nine great-grandchildren.