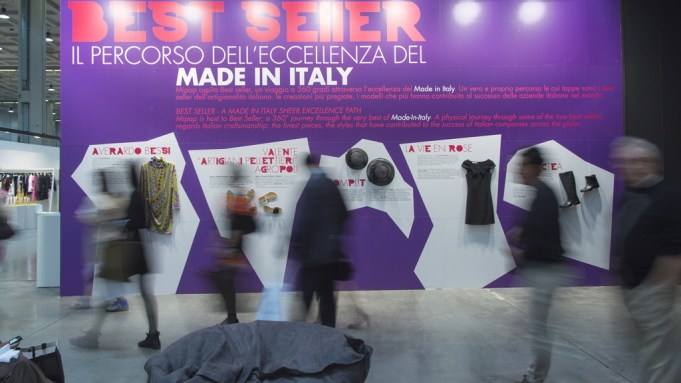 In addition, many said the economic crunch had forced them to develop new initiatives to draw exhibitors and visitors.

“You hear people say that 2013 will show the light at the end of the tunnel,” said Giorgio Cannara, president of Mipel, the fair dedicated to accessories and leather goods. At Mipel’s September edition, “a number of companies sold extremely well,” he said, attributing their success to a reasonable balance between price and quality of merchandise, a key factor when many customers have limited disposable incomes.

Mipel takes place at the same time, as Mifur, the international fur and leather exhibition, and shoe show Micam, from March 3 to 6 the Fieramilano trade fair complex. Mifur will feature 200 exhibitors from the Italian and international fashion world, and will include new themed areas of the exhibition: B.box, focusing on leather garments, technical fabrics with trimmings and quilted jackets; the designer-oriented Crossover; trend-spotting Glam Ave., and K.Point, where skins, accessories, buttons, models, machinery and tanning processing techniques will be showcased.

Massimiliano Bizzi, president of White, a niche men’s and women’s fair that also displays accessories and cosmetics, was equally upbeat, noting that “the excellent turnout and buying energy” of the fair’s September edition offered reason to hope for the next editions.

“Buyers who are betting on quality and research are obtaining good results,” he said. “Certainly accessories are becoming an increasingly important product category.”

Emanuela Forlin, exhibition manager for MI Milano Prêt-à-Porter, also known as MIPAP, said, “With the final results of 2012, we closed an unusually difficult period.” She described 2013 as a “transition phase,” with real improvements only likely to be seen in the second semester.

“Objectively speaking, in the U.S. there have been improvements, and things happen first there, so it’s a positive sign,” Forlin said. “Emerging economies are growing, and they’re on the lookout for aspirational products, which is an advantage for fashion compared to other product sectors.”

Next year will also bring about organizational changes for some trade fairs. Pitti Immagine has suspended its established trio of apparel and accessories fairs — Touch, NeoZone and Cloudnine — and will instead showcase a new women’s trade show called Super, organized with Fiera Milano. MIPAP is still slated to show alongside Pitti at Fieramilanocity.

Pitti chief executive officer Raffaello Napoleone said exhibitors had been enthusiastic about Super, which will run from Feb. 23 to 25, coinciding with Milan Fashion Week.

In Florence in January, Kenzo and Maison Kitsuné will be the next guest designers at Pitti Uomo, where about 1,050 exhibitors are expected, and Pitti W, respectively.

Napoleone said Kenzo’s designer duo Humberto Leon and Carol Lim had caught the fair’s attention back when they worked at Opening Ceremony.

“They’ve been one of the most interesting and fun sensations to emerge, and they tie in perfectly with Pitti’s strategy,” he added. “They’re two young people to keep an eye on.”

Napoleone noted that Maison Kitsuné had been chosen for Pitti W because its founders, Gildas Loaëc and Masaya Kuroki, were influential in both fashion and music.

In Vicenza, the Vicenzaoro Winter edition will take place Jan. 19 to 24. The international gold jewelry fair of the year will showcase the first collections of the year by the 1,700 exhibitors taking part. It will coincide with T-Gold, an international fair and one of its kind in Italy dedicated to machinery and tools for gold jewelry production.

Also in early 2013, Pitti will be the special country guest at Copenhagen Fashion Week. Pitti Uomo is introducing a new sportswear area called I Play, which will replace the Sport & Sport section of previous editions. I Play will mix casual sportswear with more urban looks in what the fair is marketing as a crossover style, less traditional and with more creative punch. Designers Peter Bottazzi and Denise Bonapace will create I Play’s layout at the Cavaniglia Pavilion.

Cirillo Marcolin, president of Mido optical fair, said despite market challenges in Europe, trade fairs remain essential business tools, and he expects Mido’s 2013 edition to surpass this year’s strong turnout of 42,000 visitors, of which 56 percent were foreign and 44 percent Italian.

“It’s precisely in difficult situations that it’s important to somehow attack the market decisively,” he said.

Mido is promoting itself increasingly as an “event within an event,” Marcolin explained, offering exhibitors, buyers and visitors a variety of chances to network and attend in-depth seminars. This year, the fair focused on tailoring services to different visitor categories, offering transportation to opticians and opticians-in-training, and online hotel booking assistance for foreign visitors.

Many fair organizers spoke of their sharp focus on emerging markets.

Noting that Milan remains a strong draw for Russian and Middle Eastern visitors, Bizzi said the city’s fashion weeks helped make it an increasingly international marketplace. In 2013, he also expects the U.S., China, Japan and South Korea to be key foreign markets for White.

“Italian eyewear is turning to these markets with increasing interest,” he added. “These are potential markets, with interesting growth in percentage terms, but with a relatively small share of total Italian exports in the sector.”

Mipel’s Cannara said, “Russia is a growing market, as is Korea. China has given us great satisfaction. Products destined for the Chinese market must be luxurious, for example in crocodile or python, and use highly imaginative designs.”

Textiles and accessories fair Milano Unica, which just wrapped up its second Chinese edition in Shanghai, has also been actively courting the Asian market. Milano Unica president Silvio Albini said more than 3,000 visitors attended the fair, a 50 percent increase over its first edition in Beijing last March. He also noted that Europe’s economic crisis “has imbued the market with a more rational approach.”

“There’s more attention to ‘value for money,’ so not just to price and not just to status,” Albini added. “In this, Italian textile and fashion companies in general have an advantage because we have always produced things that are beautiful and well-made, synonymous with intrinsic quality and style.”

Pitti’s Napoleone said, “The situation is complicated, although the signals we see are positive. Fashion has always come out of tough situations strengthened, almost empowered, and that’s what’s happening today.”