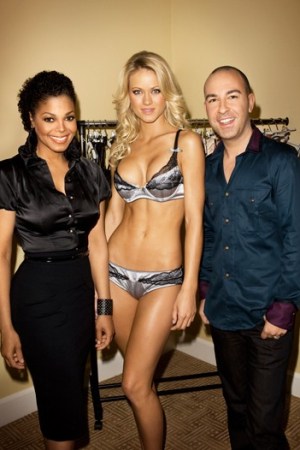 This story first appeared in the August 20, 2008 issue of WWD. Subscribe Today.

The legendary hip-hop and R&B diva teamed with Bruno Schiavi, the Australian lingerie designer behind Dr. Rey’s Shapewear line (named for “Dr. 90210” fixture Dr. Robert Rey), for her debut fashion duet. The 18-piece line is named after the hit single from Jackson’s 1986 multiplatinum album “Control,” is designed to be comfortable for a range of sizes — 32A to 44G, and is crafted of mostly satin and lace.

Items will be manufactured in China and will be in department stores by late this year or early 2009. Jackson and Schiavi are currently in negotiations with major chains to carry the line; U.S. stores will be revealed in coming months, with releases in Australia, Japan and Europe to follow.

Jackson said the combination of beauty and comfort was the primary driver for the designs, though affordability was also paramount. Price points for the bra and underwear pieces are all under $40.

“I hate when you’ve had on a bra all day long and you just can’t wait to take it off — every woman has experienced that,” she said. “A lot of lingerie tends to leave those marks and be uncomfortable. This line is about detail, fit and comfort as well as beauty and making women feel sexy.”

This is the first time in her long career that Jackson has undertaken an apparel line of any sort, though she is a fan of Alexander McQueen — she came out to help fete the opening of his Los Angeles store this spring — and Versace, whose show she attended in June. Her innerwear collection will be expanded in the future, plus Schiavi and Jackson are already at work on additional lines and collaborations, including plans to extend beyond lingerie in 2009.

“In order for me to do something I have to be very passionate about it or I won’t give it my all,” she said. “I had so much fun designing this.”

Jackson, who next month is embarking on her first North American concert tour in seven years, said the line developed quickly, though since she’s preparing for her tour, and Schiavi splits time between Los Angeles and Australia, the pair had to squeeze in design sessions whenever they could — even during dance rehearsals or over the phone in the middle of the night.

“It’s 3 a.m., Janet’s in Paris and I’m in Australia and we’re on the phone talking about the line,” said Schiavi.

“I eat lunch at the same time every day, so we’d do a lot of work during my lunch time when Bruno would come down to rehearsals,” Jackson added.

The singer first unveiled plans for the line in June at the Versace men’s wear show in Milan in June, right around the time Jackson and longtime boyfriend, record producer Jermaine Dupri, said they’re planning to start a family after the latest tour ends.

“It’s something for every woman, and I truly do mean that. It makes you feel sexy,” she said.

And presumably there will be no wardrobe malfunctions.