MAGIC will still take place at the Las Vegas Convention Center Aug. 17 to 19.

By Lisa Lockwood and Jean E. Palmieri
with contributions from Kellie Ell
on April 15, 2020

The Javits Center will be home to Coterie, among many others shows, in September.

The summer trade show schedule in New York is rapidly changing due to the impact of the coronavirus pandemic.

Following the decision to cancel the women’s trade shows at the Jacob K. Javits Convention May 4 and 5, Informa, the parent company, has decided to move Project NY, the men’s show that was slated for July 19 to 21 in New York, to Sept. 22 to 24 at the Javits center.

Along with Project NY,  Liberty Fairs’ NYC Men’s and Man NYC all made the collective decision to postpone their New York shows in July and move them to September. Liberty and Man’s September dates haven’t been set yet, but they are expected to coincide with Project as they usually do. The decision was made to allow their teams, exhibitors and visitors to feel comfortable attending the marketplaces in September.

In addition, the August women’s and children’s shows (Intermezzo, Fame, Moda, Accesssorie Circuit, Accessories the Show and Children’s Club), which were slated to be held at the Javits center from Aug 2 to 4, are canceled, and exhibiting brands will be accommodated in the Coterie, Moda and Fame shows Sept. 22 to 24 at Javits, according to Nancy Walsh, president, fashion portfolio at Informa Markets. This exhibition will also feature Sole Commerce.

Previously September’s lineup would have been Coterie, Fame, Moda and Sole Commerce.

Intermezzo and Coterie (where there is often crossover) will now occur at the same time. Walsh didn’t see an issue and said some brands align better with one trade show over the other. Intermezzo will sit within Coterie, and Accessories The Show brands will sit within Moda.

Liberty, Agenda and the PGA Show also show in Vegas in August and they are expected to follow MAGIC’s lead.

According to vendors, Informa extended contract deadlines to give them more time to make the decision on whether to participate in September Coterie. Contracts need to be signed by July 2. The payment deadlines were extended for the upcoming Coterie show, and the show is asking for 5 percent upfront, and the remaining 95 percent of the booth payment due 50 days before the show. The payment deadline for Coterie is July 31. Walsh said no discounts were offered on booths.

In calls with vendors, some questioned whether European firms will even be able to fly to New York by September to participate, and some wondered about the safety of the Javits center, which is temporarily being used as a field hospital operated by the U.S. National Guard. It is currently set up to accommodate 2,500 beds.

“We’re watching the situation unfold and hopefully we can make a decision,” said Steven Kolb, president and chief executive officer of the CFDA, on Tuesday about the men’s fashion shows. “We talked to the trade show executives, and we’re postponing indefinitely until we better understand the circumstances coming from the pandemic.”

As for the New York women’s fashion shows, Kolb said it was “too soon” to make any decisions about that. He acknowledged that whatever September will be, “it will be different.”

Moving the New York trade shows to September will be especially tough on the men’s wear community, because it’s so late. Market week for men’s wear has traditionally been in July and retailers generally complete their orders in August at MAGIC in Las Vegas. However, the Milan men’s shows in June have been canceled, and those collections will now be shown during Milan Fashion Week in September.

The argument against moving New York-based men’s runway shows to September to coincide with the women’s calendar has been raging for years since those dates have historically been too late for men’s brands and retailers. That was the reason the CFDA launched the separate New York Fashion Week: Men’s shows in July several years ago. That initiative has gradually become more untenable with fewer brands participating, and last year, CFDA opted to move the men’s dates to early June to coincide with women’s resort.

This year, because of the COVID-19 pandemic, CFDA had planned to move the men’s shows slated for June to July in coordination with the trade shows. With those shows now postponed, it may require designer brands who want to show earlier to come up with an alternative strategy.

“There’s no good answer,” one source said. “We’re all just looking for the least-bad answer. But you can’t look at fashion through the same old lens anymore, everything is new now.”

Sharifa Murdock, co-owner of Liberty Fairs, took a positive view of the change, which will see her show’s dates, along with Project New York and Man, shift to September.

“The COVID-19 pandemic has had a global impact which we cannot ignore. But with tragedy comes triumph and the coming together of the fashion industry is needed more than ever right now. That’s why we have joined forces with the other men’s wear shows; Project NY and Man New York and decided to move our July shows to September 2020 aligning with the women’s market,” said Murdock.

“In addition, we have been in talks with the CFDA to make the week stronger than ever. We feel that pushing the shows to the fall will keep the health and safety of our community at the forefront. We understand the impact this has had on our brands and retailers and promise that we are using this time to reinvent our strategies to better serve the market. We look forward to working together with the other men’s shows to foster trust and hope throughout the entire fashion industry,” said Murdock.

The July men’s shows in New York pale in comparison to MAGIC in Las Vegas, however. Although the MAGIC web site said the show will go on as planned “in anticipation that business will be conducted without disruption,” it also said the company is “continually monitoring developments and closely following public health guidelines.”

One source said it’s highly likely the Vegas shows will need to shift, too, but no decision has been made at this point. Informa, MAGIC’s parent, had been eager to take up residency in the Las Vegas Convention Center, which is undergoing construction and is slated to become the show’s permanent home starting this summer. In February, the shows all shifted to the smaller Mandalay Bay convention center complex, but for one season only. But these plans were all made prior to the COVID-19 crisis and how they will change is unknown. 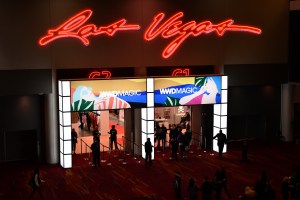 What is known, however, is that the pandemic could be an opportunity for trade show organizers and brands to completely rethink how fashion is shown and purchased going forward. “The market is so different now,” one source said, “and nobody knows how important fashion is going to be.”

Designers & Agents, which features independent and directional women’s brands, still plans its spring 2021 exhibition for Sept. 20 to 22  in New York. Ed Mandelbaum, president of Designers & Agents, said the June market week in Los Angeles, slated for June 15 to 17, will likely be canceled, but there’s no confirmation. This was made even more likely on Tuesday when California Gov. Gavin Newsom said he would prohibit large gatherings, such as conventions and exhibitions, for up to another six months to prevent further spread of the virus.

Elsewhere, the May market for intimate apparel and swimwear, originally scheduled for May 3 to 8, has been canceled, according to the Underfashion Club, a nonprofit that supports all things in the intimate apparel industry.

“We are making official what retailers, manufacturers and suppliers have confirmed among themselves,” Tina Wilson, president of the Underfashion Club, said in a statement. “Right now, the challenges facing our industry (and others like it), are seemingly overwhelming with the primary casualties being the people we work with, if not ourselves. Yet, even as companies are making the difficult day-to-day decisions necessary to survive, there is hope in longer-term plans for re-forecasting, retooling and redefining of the market.”

The Underfashion Club organizes four lingerie market weeks each year, in February, May, August and November.

Raphael Camp, ceo of Eurovet Americas, said his team is monitoring the situation and will decide when it is safe to resume the trade shows, although no decisions have yet been made regarding the late summer shows.

“Continued need for social distancing and restrictions are making it more likely that we may need to make some changes to our upcoming Curve show schedule to ensure that everyone can remain safe and healthy,” Camp said. “We are carefully examining news and medical reports about when it will be safe to resume our signature trade shows.”