Presenters included Amanda Seyfried with a video from David Beckham. 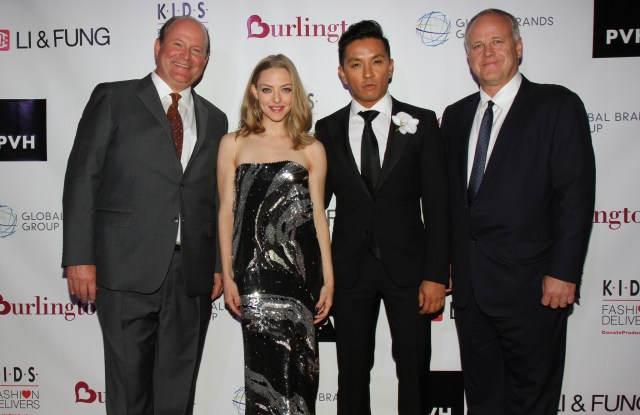 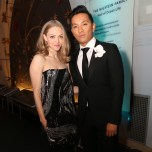 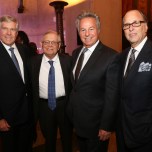 More than 700 people came out Wednesday night to support K.I.D.S./Fashion Delivers at the American Museum of Natural History, raising more than $1.7 million at the annual gala.

Gurung spoke about the foundation he cofounded, Shikshya Foundation Nepal, and how he’s pursuing his passion for education and impacting lives. Four years ago, they began supporting 12 displaced girls. Now they support 250 children with scholarships and educational programs. “I’ve always been a believer in girls’ education. I feel that investing in today’s youth is the best investment in the future.” With Nepal having suffered from two devastating earthquakes in April, the foundation has invested in rebuilding efforts, as well as education and learning projects for affected families.

Famulak’s wife, Angelique, presented him with his award, with their two young children in tow. A personal message from David Beckham (who has a venture with Global Brands Group) was presented via video. Famulak said he became friendly with Beckham and they took a spin class together. “It was like a greyhound racing with a pug,” he said. Famulak said the people in the audience get up each morning and can support their families, but there are parents who get up in the morning, and don’t know where their clothes and food will be coming from that day. “To paraphrase David [Beckham], it’s simply unacceptable.”

Wells Fargo’s Kevin Gillespie took the stage next and presented to his boss, Brister, saying, “I don’t know what you did, but you got me,” to which Brister replied, “Don’t kid yourself, you’re our Beckham.”

Brister said the reason he likes K.I.D.S./Fashion Delivers is because “it’s real and it’s tangible.” He said that 97 cents of every dollar raised goes to the cause.

Industry executives such as Laurence C. Leeds, Mark Weber, Abbey Doneger, John Pomerantz, Paul Rosengard, Victor Azrak, Rick Darling and Michael Setola were among those who attended. There was also some star power: Amanda Seyfried, dressed in a black and silver sequined Gurung gown, arrived with the designer to present him with his award. The charity’s co-chairmen, Allan Ellinger and Gary F. Simmons, welcomed attendees to the gala in the blue whale room, and Lisa Gurwitch, president and chief executive officer of K.I.D.S./Fashion Delivers, gave the closing remarks.

K.I.D.S./Fashion Delivers receives donations of new products from more than 400 companies that are distributed through more than 1,000 community partner charitable organizations. Since the charity began 30 years ago,more than $1.2 billion of donated products have been distributed to the poor and disadvantaged worldwide.