The e-commerce site will allow Colletto to delve into resortwear.

Karla Colleto Swimwear is launching e-commerce during the first week of June.

The idea of diversifying to include a direct-to-consumer component had been part of the luxury swimwear brand’s strategy for some time, but with the coronavirus pandemic destabilizing the retail market, cofounders Lisa Rovan and Karla Colletto decided to accelerate the launch.

The site will allow the company to offer a wider variety of styles, such as two-piece swimsuits and fashion-forward styles that showcase Colletto’s background in couture and ready-to-wear design. It will also allow the sisters to introduce resortwear.

Rovan explained that the company, which is based in Vienna, Va., has been manufacturing its own swimwear domestically since 1987. “We always wanted to be able to find a way to just do made-to-order, and not have to stock merchandise. That’s how we’ve always done our production. It’s always on demand. The stores order and we manufacture whatever they order. We very rarely have inventory. We wanted to be able to do the e-commerce the same way, and now we have the tools to do that,” said Rovan. The company hired an outside firm to develop the e-commerce.

Rovan said the e-commerce site will be launched simply to start, considering the economic environment. The site will launch with resort 2020/spring delivery. 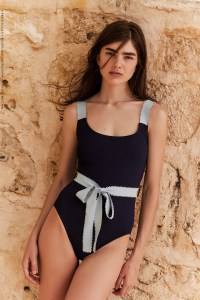 They said they plan to carry some exclusives on the site. “We find a lot of the stores shy away from buying the two-piece suits and the more forward pieces that we have in the collection because they’re afraid to take a chance sometimes,” said Rovan. 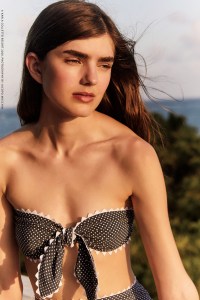 They will also launch resortwear on the site, such as easy, full-length pull-on pants and other pieces that work with their swim styles. “They use microfiber fabrics and are very comfortable,” added Colletto, who designs the collection.

The overall price range will be from $217 for basic styles to $365 for a seasonal style. There will be 67 swimwear styles available, and three masks which match the swimsuits.

At the start of the crisis, Colletto’s manufacturing facility came to a standstill and they repurposed a part of the facility to produce personal protective equipment for medical workers and essential workers. In addition to the medical-grade masks, Colletto and Rovan decided to make and include consumer face masks in their online offering, in an effort to provide alternative options so that the public doesn’t have to purchase medical-grade PPE.

Discussing retail business, Rovan said that, too, came to a standstill. But she did have one order recently that was shipped to Mytheresa in Germany and a few stores have asked for merchandise in June. “I think our position is really good because we can ramp up whenever we have to, we’re not waiting for someone to manufacture for us. If someone needed a small order today, we can go ahead and produce that and ship it out very quickly,” said Rovan.

She would have started to ship spring a few weeks after the pandemic started, and fortunately it wasn’t in production, so they could take that entire collection and turn it into the resort collection, which will be delivered September through November to their retail partners and also available on their e-commerce site.