Michael Kors Holdings Ltd. is suffering from the department store doldrums — but a lot of its ills are of the brand’s own making.

The middle-market handbag segment is being squeezed worldwide, and Michael Kors is feeling the effects on its bottom line, which fell into a loss for the fourth quarter. John D. Idol, Michael Kors’ chairman and chief executive officer, said Wednesday that the global accessories market for handbags and small leather goods is “roughly flat. We think that it’s down slightly in North America. We think it’s flattish in Europe. We think it’s up slightly in Asia.”

But even as he noted that, Idol offered a major mea culpa to Wall Street, admitting that the brand’s troubles are far deeper than it originally recognized — and require a lot more than simple quick fixes such as pulling back on promotions and reducing its presence in the wholesale channel.

So the company on Wednesday unveiled Runway 2020, a new strategic program that hopes to get the brand back on the growth track. It involves shuttering scores of stores, stepping up the brand’s fashion innovation, and pulling back even further on wholesale. As a result, Idol said, 2018 will be a year of transition.

Wall Street wasn’t necessarily impressed with the plan, pushing shares of Michael Kors down 8.5 percent to close at $33.18 in Big Board trading. The shares fell another 1.3 percent to $32.73 in after-hours trading.

For the three months ended April 1, the net loss was $26.8 million, or 17 cents a diluted share, against net income of $177 million, or 98 cents, a year ago. Net revenues were down 11.2 percent to $1.06 billion, which included an 11.3 percent slide in net sales to $1.03 billion and a comparable-store sales decline of 14.1 percent. For the first quarter, the company guided diluted earnings per share in the range of 60 cents to 64 cents, and estimated fiscal 2018’s diluted EPS between $3.57 and $3.67. That compares with Wall Street’s consensus estimates — before the company posted earnings and guidance outlook — of 81 cents for the quarter and $3.94 for the year.

During the call to Wall Street analysts, Idol said that while the “fourth-quarter performance was largely in line with our expectations, fiscal 2017 was a difficult and disappointing year for us. The retail environment remains challenging. That being said, we must acknowledge that our company needs to take steps to accelerate the level of luxury fashion innovation and our accessories assortments.” 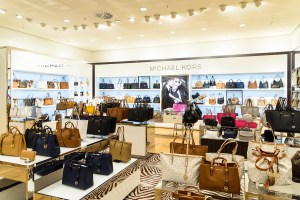 The handbag collection inside a Michael Kors store.

The ceo said the company will close between 100 to 125 stores globally over the next two years, eyeing stores that are either unprofitable or likely to become so due to declining revenues and declining traffic in certain malls. The current store base totals 827 locations. Idol also didn’t rule out the possibility of additional closures beyond those projected.

The company will have 40 percent fewer promotional days in its North American retail stores this year versus 2016, as well as pull back further on the wholesale business. And there will be more emphasis on women’s ready-to-wear, particularly in the dress segment — the best performing category in the quarter, with sales growth in the high, single-digit comps. That’s a move — along with footwear and its growing men’s business — that will further Michael Kors’ lifestyle brand aspirations, which the company has moved away from as it focused on handbags and accessories.

On the accessories side, Idol said the fashion watch business “continues to be under pressure,” although the smartwatch offerings as part of the company’s wearable-tech business were “outstanding” and represented 25 percent of the brand’s watch assortment.

As for handbags, Idol noted certain styles that resonated with consumers, particularly those that allowed for interchangeable “covers” or straps so customers can personalize to suit their needs.

Gabriella Santaniello, founder of fashion and retail research firm A-Line Partners and former managing director for retail market research at Wedbush Securities, expects the handbag market to pick up once the style trends from the global luxury brands start trickling down to the mass handbag market. She did note that a key problem — which Michael Kors’ management addressed — is that the company has lacked innovation. Santaniello cited Kors’ Selma silhouette as having been a part of the handbag collection since the firm went public in December 2011. And she said the pattern has been a few key silhouettes that were offered in several sizes and in a wide range of colors.

“In the fashion capsule, they would take the same silhouettes on the floor and change the colors or add some embellishment to make it new. The company hasn’t evolved,” the analyst said.

Given the planned $2.4 billion Kate Spade & Co. acquisition by Coach Inc., Santaniello doesn’t expect Michael Kors to be pressured into doing an acquisition anytime soon, particularly since “they need to focus on the task at hand.” Michael Kors in mid-May was said to have considered a play for footwear brand Jimmy Choo.

So the question is: will the planned strategies work at turning around the Kors brand?

Wolfe Research’s Adrienne Yih said, “We continue to point out that Kors’ brand footprint remains overpenetrated and applaud the strategic initiative to cut 100 to 125 full-line stores over the next two years.” Yih added that the wholesale channel remains “well overpenetrated” versus its competitors, Coach and Kate Spade.

Dana Telsey of Telsey Advisory Group said following a difficult earnings season and against moderating estimates, Michael Kors’ fiscal-year 2018 outlook “still disappointed.” She has a “market perform” rating on shares of Kors stock, noting that despite a discounted valuation, “visibility into Kors’ earnings trends remains difficult, in our view, as evidenced by the disappointing [fiscal-year 2018] EPS guidance.” And while the company called the new fiscal year one of transition, Telsey noted that the “company has been working to overhaul its pricing and promotional strategies for some time now.”

While Runway 2020 might be a good starting point, Ryan Berger, a senior partner at influencer marketing platform HYPR Brands, said the company “needs to create more experiences and customer interaction, feedback and customization [as well as] change the storefronts to new experiences to get people excited about the brand….They are in that middle area that is really hard to attract new audiences. They are mass luxury, [but] too mass for the high-end luxury customer and too luxury for the customers who cannot afford their products.”

Evan Neufeld, vice president of intelligence at digital benchmarking firm L2, said, “Consumers react very strongly to generic, non-personalized content. A big part of the challenge is to make sure their content is highly personalized, highly relevant and distributed correctly.”