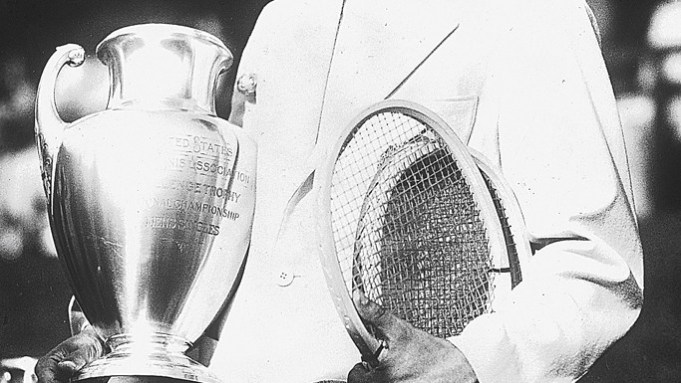 It might have begun with a shirt, but René Lacoste and his family formed the foundation of the company that is still a major player today.

The revolutionary polo that made Lacoste’s name resonate around the world was born from a personal frustration with the long-sleeve attire the tennis champion was forced to wear on the courts, driving him to design the breathable, short-sleeve L.12.12 shirt that remains a classic.

The rare mix of sports and engineering that carved the company’s identity harked from further back: René Lacoste’s father made his fortune in electronics for the automotive and aerospace industries, but was also a keen sportsman. He wanted his only son, born in 1904, to study engineering, but René preferred to play tennis. He persuaded his father to allow him to go professional, and in the Twenties went on to win the French Open three times, Wimbledon twice and the U.S. National Championships twice — the first Frenchman to win the American competition.

RELATED STORY: Lacoste Through the Years >>

His determination came from a desire to be the best at whatever he did, family members recall. For example, René Lacoste studied his opponents’ games and wrote page after page of notes on their techniques.

When forced to stop playing tennis due to ill health in 1929, he turned his eye to his inventions. René patented around 50 designs in total, from a ball-delivery machine to the first steel tennis racket.

He also nurtured young sporting talents in tennis and golf. His wife, Simone Thion de la Chaume, was France’s first female international golf champion, and the Chantaco golf course opened by her father was one of the first in France to be open to all and promote young players from all walks of life, including the couple’s daughter, Catherine, another golfing great.

“My grandparents met because of sport,” Lacoste Hamilton commented. “They wanted to give back to sport, because sport gave them a lot.”

While Lacoste had been producing shirts since 1933, it was his eldest son, Bernard, Beryl’s father, who transformed the business into what it is today.

“My father saw the business was there, he was selling a few thousand shirts, but really nothing,” said Lacoste Hamilton. “He went to his dad and said, ‘Let me have a hand at the business, I think it has a lot of potential and I would like to do something with it.’ My grandfather said, ‘You can’t do that, Bernard, you have a family to raise, there’s no way you’re going to be able to support them.’ My father said, ‘Let me see what we can achieve.’ At the time, it was not an obvious choice.”

That was the beginning of a new era for the firm, with Bernard Lacoste holding the reins from 1963 until 2005, when poor health forced him to hand over management to his younger brother Michel, until then in charge of the company’s legal and financial business. Michel Lacoste remained president of the firm until last year.

“The product was there, but my father took it to the next level with the help of my Uncle Michel,” Lacoste Hamilton explained.

“It was this trio of very strong personalities, each very good in an area,” she added, describing the family’s driving values as “teamwork, sport, entrepreneurship, doing your best.…”

René Lacoste was no doubt a visionary. The crocodile logo on his shirts is regarded in branding history as the first instance of a visible logo, although, ironically, it was criticized as vulgar at the time. And while the concept of product placement had not yet been invented, René Lacoste gave his crocodile shirts to friends to wear on the courts, building brand awareness.

Bernard Lacoste’s vision was also ahead of his time, taking the brand global before international expansion was the norm, opening a network of stand-alone boutiques and building the licensing model on which the company’s business is still based today.

“When you think of teamwork, you also think of the structure that Lacoste became, thanks to my uncle [Bernard], who sought out partners throughout the world and in different product categories,” said Sophie Lacoste Dournel, Michel Lacoste’s daughter, who founded the philanthropic René Lacoste Foundation and was briefly non-executive president of the company before its takeover by Maus Frères late last year. “Bernard invented a management style, a way of treating a brand, of internationalization. He was ahead of the times.”