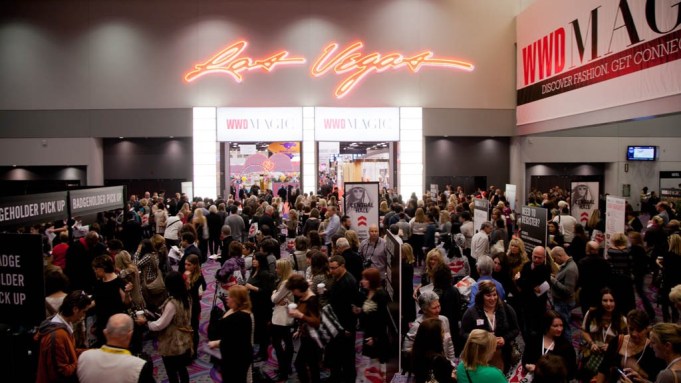 Sometimes it’s the small things that make the biggest differences.

That’s the philosophy of Las Vegas trade show organizers as they refine show merchandising, technological tools, footprints and locales. The goal is to improve the experience for retail buyers as they attempt to navigate and maximize the use of their time at the 10 expos under Advanstar Global LLC’s umbrella — MAGIC, WWDMAGIC, Project, Pool, FN Platform, Sourcing and ENK among them — and numerous others, including Agenda, Capsule, Liberty, CurveNV and Business Journal Inc.’s AccessoriesTheShow, MRket and Stitch that take over wide swaths of the city’s meeting and convention space in February.

At MAGIC Market Week, the moniker Advanstar gives to its collection of Las Vegas trade shows running from Feb. 17 to 20, Tom Florio, chief executive officer of Advanstar’s fashion group, said, “We are now pretty much at capacity across all of our shows at Mandalay Bay and the Las Vegas Convention Center. In August, we went over the 1 million square foot mark. We don’t plan on pushing that out any more, we just plan on selecting the best brands. The good news for the retailers is that the shows are literally being more curated.”

White, which features better to bridge women’s apparel and accessory brands, special occasion, activewear, outerwear and French designers in an area named Heart of Pret, is heading to the North Hall at WWDMAGIC after a stint in the South Hall. At Sourcing, the focus will be on Made in the USA with a strong emphasis on Los Angeles, the nation’s largest clothing manufacturing hub.

When it has asked buyers about their objectives for MAGIC Market Week, Florio said Advanstar has found they reply that they want to connect with brands with which they have been doing business, be introduced to new brands and travel through the shows as seamlessly as possible. To help with all three, Advanstar has clarified signage to identify products by classification and lead people from show to show, is sending out planners to some 25,000 buyers that break down the shows, and has populated Shop the Floor, its digital platform, with more brands.

Discussing Shop the Floor, Florio said, “Exhibitors have access to it as part of their booth price. Therefore, the selling season continues way beyond the show. If there is someone who wants to buy an allotment now and reorder later, they can do that with us.” He acknowledged, though, that the fashion industry is relatively slow to embrace digital tools such as Shop the Floor, adding. “It is still going to take time before it becomes common practice.”

A little more than a year into his tenure at Project, president Tommy Fazio is instituting changes to the trade show he believes will make it easier for buyers to scout trends and pinpoint the right brands, whether established or emerging, for their stores.

“I’ve assessed the layout of the shows and, starting in February, Project is going to be laid out to meet the retailers’ needs. We have really curated these lifestyle destinations to support the retailers’ buying habits,” he said. “When you have so many brands under one roof and [buyers] have three days to shop them, you want to help them out.”

Last season, Project introduced SurfProject, which is devoted to surf lifestyle merchandise, and is bringing that back with a contemporary spin. In addition, Project will unveil 10 of Tomorrow to spotlight upstart brands that are leading trends, and a tailoring initiative titled Tailoring@Project because Fazio has detected a growing interest in the contemporary tailored men’s wear segment. Also at Project is Indigo, a premium denim selection that Fazio described as “curated in a way that people can shop it by price point or by look and whether it is men’s or women’s or both.”

Overall at MAGIC Market Week, Florio said the number of buyers signing up to participate is “tracking almost identical to last year. Seventy percent of the retailers that come to our shows have gone to the shows the prior year. They might buy differently [due to the uneven economy], but they are going to go. MAGIC Market Week has become one of the largest, if not the largest, fashion week in the world. You can see over 7,000 brands. We don’t expect there to be a drop in attendance.”

Modern Assembly, an alliance struck earlier this year between the trade shows Agenda, AccessoriesTheShow, Capsule, Liberty, MRket and Stitch, is returning Feb. 17 to 19 at the Sands Expo Convention Center.

“The state of retailing is still a challenged one and I think retailers are looking for the place where they can see the greatest number of resources in the shortest amount of time. Modern Assembly was a home run last season. We saw double-digit increases in attendance,” said Britton Jones, president and ceo of Business Journals. “While each show maintains its own identity and presence in the Sands space, I think you are going to see even tighter integration with the producers working together.”

Stitch, which is seeing its square footage increase by 40 percent, and AccessoriesTheShow are relocating to Hall A and B from Hall C and D at Sands Expo.

“There is more space and it was perfect timing for us because we never could have accommodated this much growth without the new halls,” said Jones, who pointed to international exhibitors as contributors to the growth.

Roni Rabl and The Isabella Co. are among the exhibitors presenting European collections at Stitch. Outerwear is a growth driver at Stitch, too.

Outerwear brands that are new to Stitch include Flash Geo and Blue Duck Shearling. Business Journals is drawing attention to nascent brands with Designer Lab at AccessoriesTheShow and Vanguards Gallery at MRket.

“We started Vanguard Gallery in New York, and we brought it over to Vegas. It is growing incredibly,” said Sharon Enright, vice president of the trade show division at Business Journals. “It’s proving to be a great resource for buyers. When we talk about growth, an important aspect of growth in the market is newness. It is very important to us to have newness in all of our markets because it is so important for buyers to discover.”

The Off Price Show sets up shop in the Sands Expo, as well, but will do so a tad differently from Feb. 16 to 19. It’s cash-and-carry section, which is projected to have up to 100 booths, up from 50 previously, will be relocated to the Casanova and Marco Polo ballrooms at the lower level to provide space to expand the show in Hall G. Footwear will be situated in a new Footwear Pavilion near the OP Bistro Express. Off Price has grown from 10 vendors when it started to more than 500.

“Our total attendance was a little over 11,000 last year and we’re hoping for between 11,000 and 12,000; that’s always the goal,” said Off Price’s marketing and publishing manager Todd Fabos.

The location of CurveNV is moving slightly. The lingerie and swimwear trade show, which is from Feb. 17 to 18, will be held at a new site within The Venetian Las Vegas at the Bellini and Titian ballrooms on the main floor of the hotel.

Women’s Wear in Nevada is sticking to the venue and dates that have worked well for it. The show will be at the Rio Las Vegas Hotel and Casino from Feb. 17 to 20. Roland Timney, the manager of WWIN, said, “We are a completely sold out show with about 850 booths.…We’ll expect somewhere around 3,000 stores.”