Heron Preston was born and raised in San Francisco, so he’s always had a soft spot in his heart for Levi Strauss, another native of the city.

“I’ve been a Levi’s fan since I could choose my own denim,” he said, adding that his mother worked downtown near the Levi’s headquarters when he was a kid, so the brand was always part of his life.

As a result, it’s a homecoming of sorts for Preston to collaborate with the venerable denim brand to celebrate 501 Day on May 20. The date marks the 146th anniversary of the patent the company received for the rivets on its work pants and its de facto anniversary.

This year, the two collaborated on special limited-edition Levi’s x Heron Preston 501 jeans. The models — one each for men and women — offer Preston’s unique take on the brand’s signature product as well as a unique patch.

Preston said Levi’s invited him into its Eureka innovation lab in San Francisco where “there were scissors and razor blades and denim everywhere.”

They gave him free rein to go for it and waited to see the result.

“It was like hanging out with friends and playing with denim,” he said. “It  was a very playful project.”

The result is a women’s style that offers a hand-dyed orange tint on the front —a signature of the designer — with faded indigo denim on the back, distressing, graphic prints, open side seams secured by orange back darts, and a reversed back pocket with a flattened out Levi’s Red Tab.

For men, Preston used front and back panels from two different 501s to create a black-and-white tie-dye pattern on the front with faded indigo on the back. There’s also a flattened out Red Tab attached to a reversed back pocket.

Both jeans feature a special-edition Heron Preston orange label on the front waistband, as well as a Levi’s Batwing logo tab sewn into the outseam on the side and an orange screenprint underneath the back patch.

“You can see the strength of the 501 jean — how absolutely iconic it is in its design when, after we chopped it up, colored it, and twisted it, it’s still unmistakably the 501 jean,” Preston said.

The designer said that he wasn’t intimidated by the idea of reworking such as a well-known product, but did admit that is was  “kind of unheard of” for a brand as large as Levi’s to allow a designer to tweak its logo — and he’s grateful for the trust. “They gave me license to even play with the label and the logo. That says a lot and is quite touching,” he said.

But it’s also a result of his longstanding relationship with the company and Jonathan Cheung, its senior vice president of design innovation. “I knew the team already, so it was like hanging with friends and playing with denim,” Preston said, “remixing ideas and putting my twist on things.”

“He’s a San Francisco guy and when he told us the story of his family, it really felt like he was coming home,” Cheung said. And interestingly, while they were working on the project, a heron landed on the terrace outside his office, something that he’d never seen before. “I’m not superstitious, but I thought that was a sign,” he said.

Cheung said he was introduced to Preston a few years ago in Paris by Off-White and Vuitton men’s designer Virgil Abloh and they’d “chatted on and off” over the years about working together. More recently, they started “kicking ideas around and we sent Heron some jeans to play with. 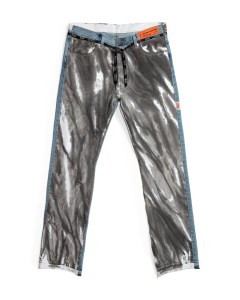 The men’s jeans use two different 501s to create a tie-dye effect.

“We had this basic premise of messing around with the Levi’s design language — of putting a glitch into the 501’s DNA. Heron was sending over images of blotchy ink dyes, and I hit him back with images of cutouts and slits. The 501 is the base, then there’s little, deliberate missteps in the DNA.”

Preston will be appearing in the promotional materials for the collaboration alongside Hailey Baldwin in a campaign shot by Meritocracy Inc.’s Matthew and Karla Welch.

Cheung said the two are friends so the campaign looks authentic and natural. And Preston laughed when asked if Baldwin’s husband, Justin Bieber, was jealous. “No, we’re all friends,” he said.

The jeans will retail for $450 and only 501 pairs of each model are being produced. They will be available at Levi’s stores in SoHo in New York, the Champs-Élysées in Paris, Newburgh Street in London, as well as in Berlin, Tokyo and Hong Kong. They’re also available at Nordstrom in New York and Los Angeles and H Beauty & Youth in Aoyama, Japan.

Levi’s celebrates 501 Day every year and in 2018, Levi’s worked with stylist Karla Welch to offer her take on the 501s jeans, trucker jackets and other products.

Preston, who is also a DJ and art director, started his career working for Nike and Kanye West before launching his own brand in September 2016. His streetwear-inspired collection of sportswear and accessories is known for its use of near-fluorescent orange, the Cyrillic word for “style,” unique interpretations of herons in avian prints, and collaborations with everyone from Carhartt, Off-White and Nike to NASA. He’s nominated as an Emerging Designer of the Year by the Council of Fashion Designers of America for its awards on June 3.

Preston said he was “shocked” when he heard he’d been nominated. “I never expected to be nominated for any award, especially a CFDA award,” he said.

He also said he’ll be showing his spring collection in Paris on June 18. “It’ll be my second runway show and I think it’s my strongest collection to date.”

And although he left the U.S. for France, like many other American designers including Thom Browne, Bode, Sies Marjan and others, he didn’t rule out returning one day.

“Even though a lot of [Americans] are leaving for Paris, it’ll open up an opportunity for New York sometime,” he said.