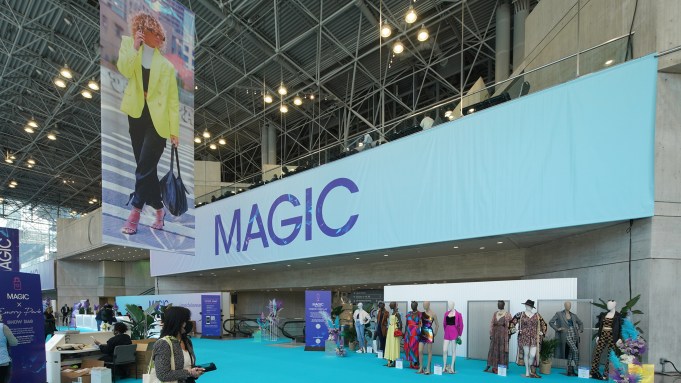 NEW YORK — The trade show circuit is back in full swing in New York.

Brands, manufacturers and retailers alike flocked to the Jacob K. Javits Convention Center in Manhattan this past Sunday through Tuesday for the MAGIC trade show (once the Fame and Moda trade shows, now consolidated), along with sister trade show Coterie, despite macro challenges, rapidly changing pandemic mandates and uncertainties abroad.

“Our community was very excited to come back to MAGIC New York,” Kelly Helfman, president of Informa Markets Fashion, parent company to both MAGIC and Coterie, told WWD. “We saw a significant increase in brands and retailers at our event compared to last season when the pandemic was keeping more people at home.”

Attendance at the MAGIC show — which features contemporary and trend-driven styles for a slighter younger demographic than at upscale Coterie — was up 36 percent, compared with September’s show, the first time the West Coast show had made an appearance on the east side. There were also higher numbers of major players, like chain stores and department stores, attending and an uptick in international participants (spanning roughly 80 countries).

“People are ready to be back in person again, and while digital options are something that will always be a part of what we do, it can’t replace the human connection that our events create,” Helfman said. “I think trade shows and live fashion events are going to be more popular than ever now that people are just dying to get out.”

Retailers or buyers at MAGIC included Asos, Urban Outfitters, Walmart, Bloomingdale’s, Forever 21, Lulu’s, Free People, Macy’s and Saks Off 5th, TJX and Belk, among others, in addition to a number of indie boutiques. Many were on the hunt for bold colors and optimistic threads — such as flared-legged denim, miniskirts, cutout fabrics and padded bags — as they sipped on free Baileys-spiked coffee drinks and listened to live music by D.J. Technicolor.

“People [are] looking to express themselves in a more vibrant way as they reemerge from the pandemic,” said MAGIC vice president Jordan Rudow.

Curve, the intimate apparel show hosted by Eurovet Americas, was also on display in the convention center.

Raphael Camp, chief executive officer of Eurovet, acknowledged that some brands and retailers opted out of attending the trade show circuit in person this time around because of New York City’s required vaccine mandates (visitors at the Javits Center were required to show proof of vaccination and wear a mask while indoors), but added that attendance was better than expected with more than 1,300 buyers, or roughly 70 percent of Curve’s 2020 attendance rates.

“Which is fantastic,” he said. “The decrease was because several buyers from the South or Midwest didn’t come because of the vaccine mandate. Otherwise we are almost fully back to business.”

But things fared even better at MAGIC.

“We saw quite the opposite effect and saw an increase in buyers and retailers attending our event,” Helfman said, comparing the recent show with September’s MAGIC New York event. “We adhere to all city regulations when it comes to health and safety and the feedback we received was that our attendees felt more comfortable at our event because of this.”

One of those safety measures was increased distance between booths at MAGIC and Curve, which allowed for a greater feeling of social distancing.

Still, this round of MAGIC New York was only the second iteration — and that’s amid the pandemic, a time when travel restrictions and COVID-19 variants change on a near-daily basis. There is no pre-pandemic MAGIC New York data for the sake of comparison.

Thanh Nguyen, a marketer for Los Angeles-based ready-to-wear brand Lena, who was on location for MAGIC New York both this week and last September, said the recent three-day event had a bustling vibe, even if not quite at the same level as the September shows.

“The last New York MAGIC show was very, very busy. Like, we were just slammed,” she said. “And then with this show, it’s been a consistent busy, especially [Sunday]. We were busy from morning time all the way until 5 p.m. It would be like a good three customers in and after they would leave, another three customers would come in [to the booth].”

As for headwinds, including the escalating crisis in Ukraine, Nguyen said she hadn’t seen it affect the business yet, or heard of any buyers cutting back orders.

“But I can feel it,” she said. “I can feel it in the air. It’s such a touchy topic. We don’t know how [a potential war] is going to affect us at this point. But, I mean, a business is a business. And it’s just one of us. This is a whole community at MAGIC. Everyone is dealing with this at the same time.”

Guido Campello, co-CEO and creative director of Cosabella, which has headquarters in New York and Italy, said he’s heard geopolitical concerns among European reps, but not yet in the U.S.

“I think it’s still premature,” said Campello, who is also co-owner of luxury lingerie boutique Journelle. (Both Cosabella and Journelle showed at Curve.) “I think we’re two weeks away from critical mass realizing what’s going on.

“The only issue we have is if they keep stopping the airplanes,” Campello continued. “If they start closing down airspace and closing down Delta, Alitalia, whoever it is that’s moving. ‘Cause that’s how all our product is shipped, by planes. The moment they start shutting down the European airspace — like they’re already starting to do — that could be dramatic for Europe.”

Stateside, Camp said a lot of buyers have been trying to place orders earlier than usual to get ahead of supply chain backups. Of course, this causes problems when everyone tries to do this at the same time.

Samuel Bai, a sales director at L.A.-based rtw brand Fore, said supply chain issues are “still an issue for us, because everything is still super expensive. But not only that. Gas prices, too. Everything kind of evolved and is very expensive. When the demand for ports in…Long Beach, [Calif.] is super high, they charge a lot.”