The sexy Brazilian footwear brand has room for major growth in the U.S.

Marina Larroude is leaving her role as vice president of women’s fashion at Barneys New York to head up Schutz USA, WWD has learned.

Larroude will oversee the entire Schutz business in the U.S. across all channels — retail, wholesale and e-commerce.

Schutz is a Brazilian women’s footwear brand and one of six owned by Arezzo & Co., the giant footwear firm headquartered in São Paolo, Brazil. The company’s other footwear brand labels are Arezzo, Alexandre Birman, Anacapri, Fiever and Owme.

“Schutz is a very youthful, feminine, fearless shoe brand,” Larroude said in an interview. “It’s very sexy for the confident woman. What’s so fantastic is that there is enormous opportunity to diversify the brand,” Larroude said, emphasizing that the footwear label leans toward evening styles, and could grow by appealing to women during different stages of life, and with a greater array of styles suitable for different occasions, from day into evening.

She officially begins her new job on July 15. Barneys did not name a successor.

Larroude isn’t completely severing her relationship with Barneys. She said she will continue with Barneys as a “brand ambassador” and involved with social media, events and other activities.

In the U.S., Schutz shoes are sold at Neiman Marcus, Nordstrom, Shopbop, Bloomingdale’s and Revolve, among other retailers, and the brand operates five stores in the U.S. as well as e-commerce.

“The goal is to grow the business and open more doors in America,” said Larroude, noting that Schutz recently opened stores in the Mall at Short Hills in New Jersey, and in the Westfield San Francisco mall. Schutz stores are also located in Beverly Hills and Miami and the footwear is at schutz-shoes.com.

Larroude joins Schutz after two and a half years at Barneys. Earlier, she served as Teen Vogue’s fashion and accessories director for two years and fashion market director at Style.com for eight years.

At Barneys, she had a broad range of responsibilities in women’s ready-to-wear, shoes, accessories and jewelry. She was involved in designer discovery, product development, marketing, planning and sales performance, among other duties. She worked with established and emerging brands, leveraging exclusives, and managed the trend reporting as well as vendor, merchant and marketing relations to curate mailers, digital lookbooks, social media content and Barneys’ online platform. Additionally, Larroude collaborated on Barneys New York women’s private label in various categories, from design through production and sales.

“Throughout my career, my passion was to help designers launch and develop further their own brands. Now, it is my turn to take all I gathered in these years and use it to grow a brand and a business myself,” Larroude said.

Like Schutz, Larroude is Brazilian. Her hometown is Araçatuba in Brazil. “Having grown up in Brazil, I have always admired the Arezzo group,” said Larroude. She has known Alexandre Birman, designer and chief executive officer of Arezzo & Co., for several years.

“Marina comes with an extensive professional background that will be an instrumental part of the business and future of the brand,” said Birman.

Schutz footwear debuted in 1995 and is known for bold, eye-catching details and sexy two-strap heels, gladiator sandals, caged stilettos and espadrille wedges. “It’s all well-made in leather in Brazil, and at a very good price point,” $90 to $200, Larroude said. 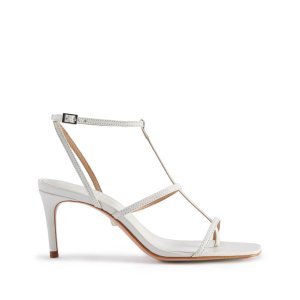