Miami has become a hotbed for boutique trade shows. 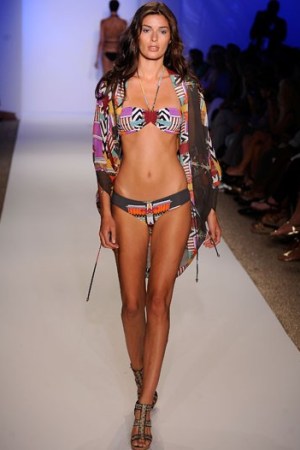 MIAMI — Miami has become a hotbed for boutique trade shows.

Salon Allure — a trade show with more than a dozen contemporary swimwear, resortwear and fabric vendors, including Diesel, Red Carter and Tori Praver — bows at the W South Beach hotel on July 17, including an opening-day fashion presentation on a pool runway.

“Our concept enables designers to show customers new collections and experience them in the setting where they’re intended to be worn,” said event producer Rick Fatzinger.

Coinciding with the four-day event, the Swimwear Association of Florida’s SwimShow 2011 takes over the Miami Beach Convention Center with new brands such as Hale Bob, 6 Shore Road and Stella Cove among its 350 brands representing 2,000 lines from around the world. The show expects to draw about 2,000 buyers.

“We’ve had to restructure our usual layout to accommodate more brands, especially from overseas,” she said.

Mercedes-Benz Fashion Week Swim returns to the Raleigh hotel July 15 to 19 for its sixth season and largest designer roster to date, according to IMG Fashion. Trina Turk starts the shows that will feature about 25 designers, including Poko Pano, True Religion and Mara Hoffman, in two runway venues, plus the pool and penthouse.

“With such overwhelming interest, we’ve incorporated group shows, penthouse press previews and poolside cocktails to accommodate the most designers yet,” said Christina Neault, executive producer of the event.

Coast, a pioneer in the boutique trade show category here, returns to the Savoy Hotel for its Nov. 1 to 2 event. Founder Karen Bennett noted that May’s show overflowed into the bar area to house collections like Twisted Heart, Custo and Genetic Denim, and showrooms including Simpatico, Globe and Hotline. After Simpatico wrote more than 40 orders, she plans to offer the bar again in November, along with 31 suites, the lobby, lounge and ballroom.

“I’m out of room now, unless I add tents around the pool,” said Bennett, who’s sharply editing participants to keep her contemporary direction with the right price and mix.

The Beacon Council, Miami-Dade County’s official economic development partnership, is facilitating the development of a 100,000-square-foot warehouse facility in South Beach for fashion shows, as well as for wholesaling and retailing Italian designer fashions. In November, the council hosts 20 French fashion companies that are researching U.S. headquarters and distribution centers in Miami.