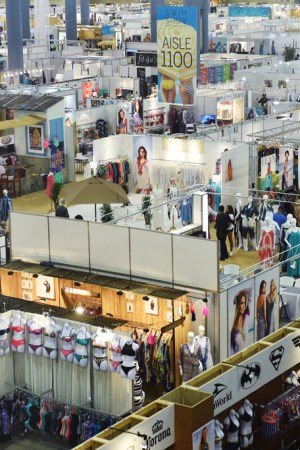 Swimwear buyers found plenty of good product and showed their resilience at the annual Miami Swim Week, despite a challenging new format and wild weather swings dampening sales for some. The recent spate of shark attacks, including one caught during a live broadcast of a South African surfing competition on the second day of market, hasn’t been good for beach traffic, either.

Held July 18 to 21, the four-day SwimShow at Miami Beach Convention Center, with 2,700 lines, anchored smaller, nearby trade shows: Hammock at W South Beach hotel, and Cabana, which occupied two tents between Collins Avenue and the ocean and 21st and 22nd streets.

The new format of the week — spurred by IMG’s sudden decision in the spring to retreat from its decadelong run in producing fashion shows at a centralized locale — caused some logistical issues. Retailers had to navigate three trade shows and a sprawling sea of fashion shows.

“All this running around makes you lose focus, and I don’t have time to get trapped in hotel suites when I’m just browsing,” said Tom O’Hara, founder of Gone Bananas, a 40-year-old swim store with 100 brands in San Diego.

Susan Wallace, head buyer for Aqua East Surf Shop’s two locations in northeast Florida, was visibly stressed while en route from viewing ViX Paula Hermanny at Cabana to an appointment at Frankies Bikinis at Hammock. “This set-up isn’t buyer-friendly — unless you’re into shuttle buses,” she said, adding that at least her budget was slightly increased budget. “Our juniors business is on fire, and contemporary’s making a nice comeback.”

Some small boutique retailers who couldn’t leave their businesses for long had no choice but to put their faith in Cabana’s intensely curated selection of exhibitors.

“There’s only one of me, and I don’t have time to sift through lines,” said Patricia Costa, owner of local shops Beach and Weekender. Costa attributed her budget’s 40 percent increase from last year to word of mouth finally kicking in since her first location launched in 2011. She picked up pleated swimsuits at Made by Dawn, turmeric and blush one-piece suits at Nightcap and clean shirtdresses at Solid & Striped. Dodo Bar Or resort’s dresses and caftans in black-and-white and red-and-white patterns embellished with tassels were another find. “Their Israeli designer is an artist, and the quality is unheard of at the retail price around $400,” Costa said.

Catching up with the explosion of beach-to-street cover-ups, activewear was more pronounced than at previous markets. At SwimShow, it appeared as extended divisions of swim brands or as stand-alones like Industry, a nascent line by Manhattan International, a multibrand manufacturer and distributor in Montreal. For its second season, designer Debbie Shuchat created a more fashion-forward collection retailing from $50 to $220. Neiman Marcus and Boston Proper were among retailers writing notes about mesh tanks and cropped tops in crackle and techno dot prints, leggings with reflective strips and moto jackets with padding, zippers and faux leather accents.

New York-based In Mocean Group relaunched Locker, a collection of swimwear and activewear made entirely from swim fabrics retailing for $40 to $88. Styles such as a T-back bralet, scuba-inspired tankini and shift dress in lightweight Neoprene and a splotchy print with pops of pink and neon yellow read much more contemporary than designer Anne Cole’s original misses’ vision in the late Nineties.

“These are ‘coffee outfits’ where I live in Southern California,” said designer Anna Kenney. Her 2016 collection for Anne Cole Signature combined new trends like engineered prints and vibrant roses against a black ground while continuing the brand’s mesh story through one-piece silhouettes with peek-a-boo placements and high-neck bodices, T-shirt dresses and harem pants.

“Mesh isn’t strictly sporty anymore,” said Sabra Krock, creative director for Everything But Water, a specialty chain headquartered in Orlando, Fla. “We saw it as high fashion statements, such as a one-piece with open-weave sleeves, at Acacia, Lenny Niemeyer and Melissa Odabash.”

Moving on from strappy suits, she plans to order bold stripes, cheeky bottoms, which she said are becoming acceptable nationwide through Instagram exposure, and sexy one-pieces from cutouts to crochet.

‘“Monokinis and one pieces have been reinvigorated and will be even stronger in 2016,” she said.

Among other key trends at the show:

• embellishment-inspired prints, such as sequins, feathers and shells;

Katie Palumbo, a buyer for Soft Surroundings, a catalogue and 23-store specialty chain based in St. Louis, also invested in one-pieces with strategically placed cutouts and multiple straps by Kenneth Cole New York.

“Our customer is a Baby Boomer who wants control and fashion in one,” said Palumbo, whose swim sales have doubled. “The category performed so well that we’re bringing it in earlier for resort.”

Manhattan Beachwear, a multibrand manufacturer in Cypress, Calif., never expected such a high level of response for its advanced one-pieces according to Howie Greller, vice president of design and marketing.

“They began as sizzle pieces, and we ended up getting reorders,” he said, citing fit women ages 30 to 50 as its core customers. “They maintain good bodies and want to show off.”

“Swimwear manufacturers have an edge over the denim guys in segueing into activewear, since we understand stretch fabrics that can take a beating,” he said.

“Women can find swimwear anywhere, so specialty cup sizes are driving our business,” said Janice Camel, the third-generation owner of Get Wet Shop in Lafayette, La.